Diamond Comic Distributors released its information for the top books of 2014 yesterday. It was a big year for comics! And and even bigger year for the publishers like Marvel, DC, and Image who helped make dreams come true for readers everywhere. So how did the battle for the best work out in 2014? Check after the break for the details.

It should come as no surprise that Marvel and DC are the front runners in the battle for best. But it’s interesting to see who’s in the 3rd, 4th, and 5th spots: 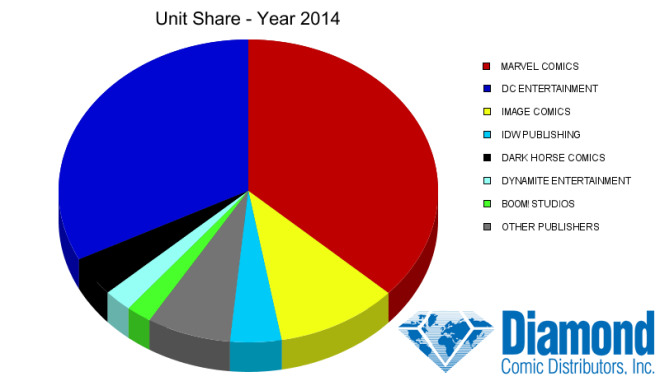 Marvel also dominated nine out of ten top comics for the year with titles like Amazing Spider-Man #1, and Death of Wolverine at spots 4, 5, 8, & 9. It’s nice to see that Image Comic’s The Walking Dead #132 made the list at #2.

Image Comics had a strong showing in the Top 10 Graphic Novels & Trade Paperbacks. With titles like Saga, Walking Dead, and Sex Criminals running away with most of the spots. DC squeezed in there with their first volume of Batman.

When it comes to shipping numbers DC won over Marvel for the most product shipped out to their readers in 2014.

According to Comic Vine the way this is all tallied and collected is through the comic book stores:

Unit and dollars sales are calculated based upon orders invoiced and shipped to Diamond accounts during January to December 2013, which comprises initial pre-orders, advance reorders, and reorders, minus any copies that are received back from a title marked as returnable.”

So there you have it! All wrapped up in a nice little bow for your analytical types. Frankly, I could have told you Marvel and Image comics were raking in the dough, but to see that DC shipped the most titles? Now that surprises me. What surprises you about the above data? Anything shock you?