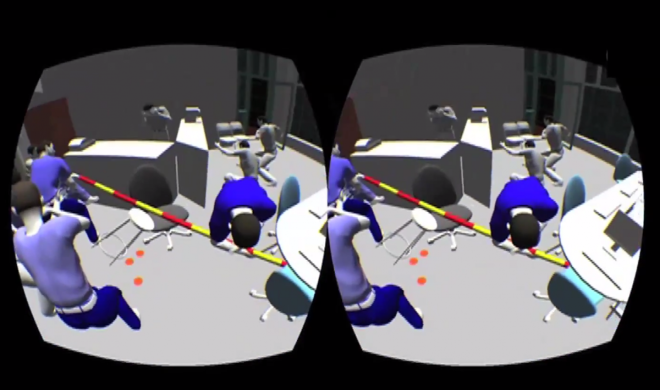 Virtual reality isn’t new. Nor is crime. These are both two very basic concepts in the 21 century. But sandwich the two together, and you’ve got the new Grand Theft Auto 11 on your hands. Or maybe not – but what you do have is a way for jurors to see how a crime scene was laid out within a virtual world. Cool, or eerily creepy? You be the judge…

According to Popular Science:

“Forensic researchers are experimenting with virtual reality headsets. Their goal is to immerse jurors in a 3-D simulation of the crime scene, to help them make better-informed decisions as to whether a defendant is guilty or innocent. Here’s what one such reconstruction could look like:

A team from the University of Zurich has successfully used the Oculus Rift to recreate a shooting, which police officers confirmed was accurate.

The implications of bringing virtual reality into the courtroom could be vastly helpful, but as with other forms of forensic evidence, it could also be subject to bias. Speaking to New Scientist, digital reconstruction researcher Damian Schofield warned: “Think of a murder scene: whether you view it from the point of view of the murderer, the victim or a third person will totally change your perception of what’s happening.”

Wow – cool – cool – cool! I don’t know how well this would work in a real setting, because a lot of liberties are going to be taken into creating the “scenes,” even if they know the intimate details of the crime. But it may work out for the better and we can be on a whole new road of presented evidence within the court systems. SCIENCE!

Now – if only Dexter had something like this at his fingertips, not that he needed it, but maybe it would have helped his, um, “urge.”