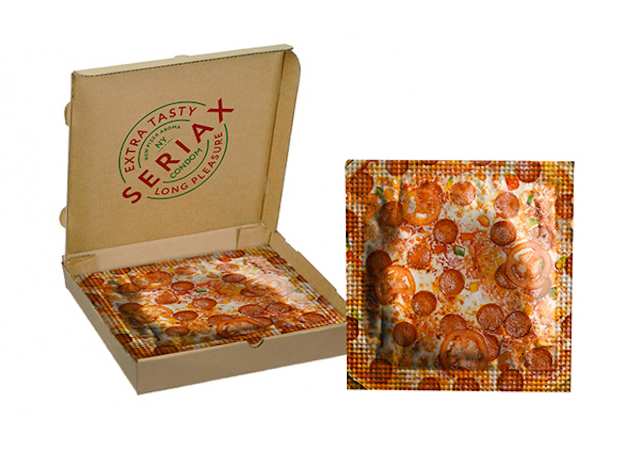 You know those nights you just can’t choose between pizza and sex? I know what you’re thinking…that was just last Tuesday, AmIRight? But never fear loyal pizza lovers – because you no longer need to deliberate over such agonizing choices, because – BEHOLD – the pizza condom has arrived. More pics after the break.

This wonderful project is brought to us by Russian artist Marina Malygina and unfortunately not in production (yet).

According to Design Taxi:

“Her design was inspired by Joey, a character from the popular television series Friends, when he was caught in a dilemma to either give up food or sex. Combining the two most important staples seen in film and television in the American culture, Malygina’s condom packaging design is targeted toward the youths who pursue these forms of pleasures in excess. “

And bless you Marina for ensuring that we never have to make such hard decisions ever again! I just can’t stand how cute the packaging is – I mean – I know we don’t use the word “cute” when we start talking about the thunder-from-down-under, but come on, look at that pizza box! 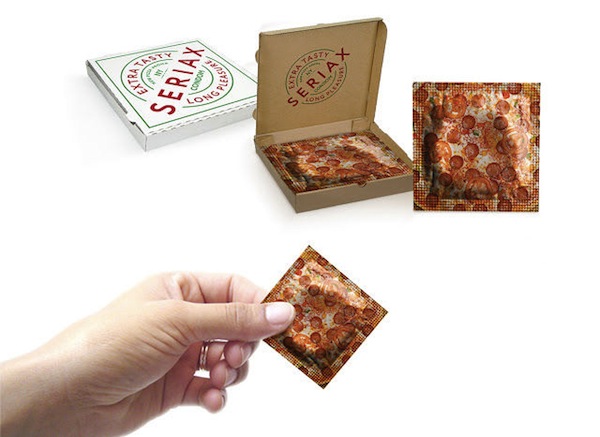 Nothing says “Honey, I’m ready for some lovin'” like a piping hot pizza condom. Now the question is – “who’s pepperoni is that?” Or, “should I hold the onions?” Or, “Is this deep dish?” Or “You want Chicago or NY style?” …. It’s just too easy.