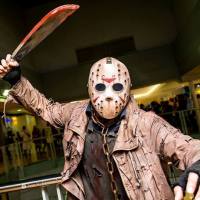 Part of the reason I was hired on here at Gabbing Geek was because of a secret project I am working on.  (The other reason is because I give the best back rubs.)  So secret in fact, that the Geeks themselves are not aware of it and one day I will strike and take over the site and crush them like the the vermin they are!  Mwahahahahaha….um…ahem.  Forget you read that last part Jenny, Ryan, Watson and Tom.

Without letting the cat out of the bag, a component of the work that is being done is to find obscure (in-continuity, if that matters much these days as Marvel prepares to blow our minds and wallets with Secret Wars) Spider-Man appearances across the Marvel U.  For the purposes of this column we will be looking at small cameo appearances.  If Spidey shows up for a full issue, well, we’ll talk about that later.  Let’s look at three very early Spider-Man guest spots.  For reference, Amazing Fantasy #15 (the first appearance of Spider-Man) was published in August 1962 and Amazing Spider-Man #1 in March 1963.

Avengers #3 (January 1964) – In one of his first appearances outside of his own mag, Spider-Man is approached by a Doctor Strange-like astral projection of Iron Man who is searching for the Hulk.  The result, like many of Spider-Man’s early interactions with other heroes…maybe he should have been named Your Unfriendly Neighborhood Spider-Jerk. 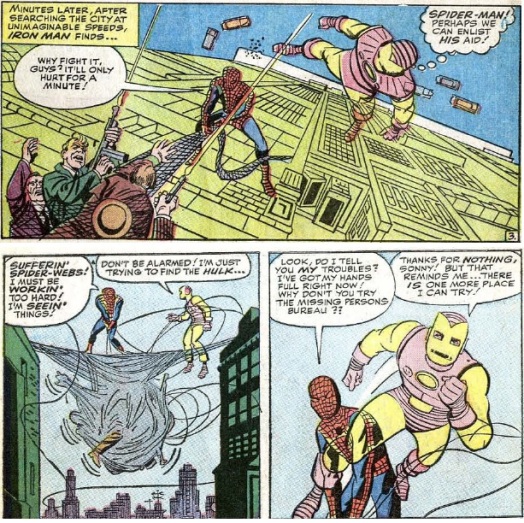 Strange Tales #119 (April 1964) – As the (are you serious, this is the villains name?) Rabble Rouser is busy turning crowds of people against the Human Torch simply by doing his best J Jonah Jameson on a soapbox impression, Spider-Man stops by to give the Torch some advice.  It seems the shoe is on the other super foot as Spidey looks like the good pal and Johnny Storm comes off as the Human Jerk.  Hmmmm.  Jerk Torch?  He’s not very nice to Spider-Man.

Tales to Astonish #59 (September 1964) – The smallest of cameos, Spider-Man doesn’t really appear, but the Avengers are watching him on the Stark Technologies Projectatron 8000 as it looks like Spider-Man found and fought the Hulk for them.  (See Amazing Spider-Man #14.)

One thought on “Cephalothorax Cameos (Or Spiders, Spiders Everywhere)”