Working as a photographer for a great metropolitan newspaper has it’s advantages when you’re Spider-Man.  Need to get to Florida?  Get esteemed publisher J Jonah Jameson to pay your way in exchange for a Lizard or Man-Thing exposé.  And don’t worry about the seldom asked and even less seldom pursued questions like “What is Spider-Man doing in Paris?  Hey, isn’t Peter Parker in Paris?”  A stand-in, Spider-Man suit stuffed with hay or a well timed and placed pre-recorded message that makes people thing Spider-Man and Peter Parker are not one and the same, will do just fine.  This is not a universe that can be fooled by a pair of reading glasses, but they’re not much better.

With that in mind, Spider-Man’s alter ego often pops up in other stories across the Marvel Universe usually accompanying JJJ or a reporter at some press conference or event.  And what’s a football game without the Inhumans showing up?  Or a press conference without Doctor Doom arriving to threaten the Fantastic Four?  More often than not, if this was Spidey’s own mag, he would find a way to slip away and return to join the fight as Spider-Man.  Usually with the excuse of “going to get pictures” or the often used “going to get help”.  And more times than not, Peter returns to Flash Thompson calling him a coward.  However, if Spider-Man is not getting royalties for his appearance in this month’s Avengers or Fantastic Four, he’ll often hang back, take pictures, and let the big guns handle it.

Fantastic Four 35 (February 1965) – in a very early appearance by Peter Parker outside of Amazing Spider-Man, future BFFs continue their frosty war of words as the Thing and Human Torch just happen to run into a still in high school Peter Parker.

Fantastic Four 61 (April 1967) – Peter is now a student at ESU, and is also working at the Daily Bugle covering the big game!  And what’s a football game without the Inhumans showing up?  (Editor’s note: “Jimmy, you already used that joke.”) 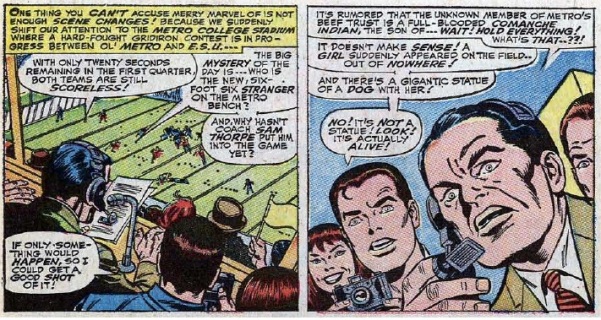 Captain America 130 (October 1970) – again combining his love of colleges, taking photos and staying out of things, Peter takes it easy and let’s Captain America take care of  Batroc The Leaper, Porcupine and Whirlwind.

Amazing Adventures 3 (November 1970) – The Black Widow is the new hot spider named super heroine in town and we get this great random interaction between Peter and Jolly Jonah at the Bugle offices.

Avengers 82 (November 1970) – And sometimes, you just gotta relax, ignore the Zodiac invasion of Manhattan and have tea with your Aunt. 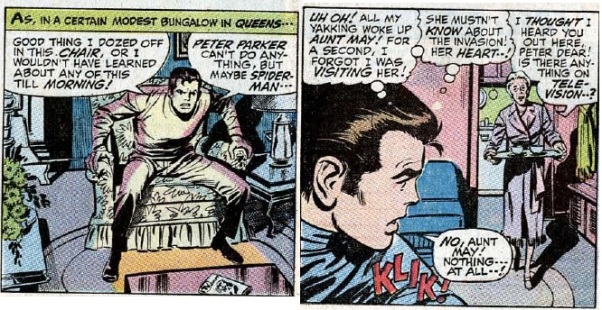