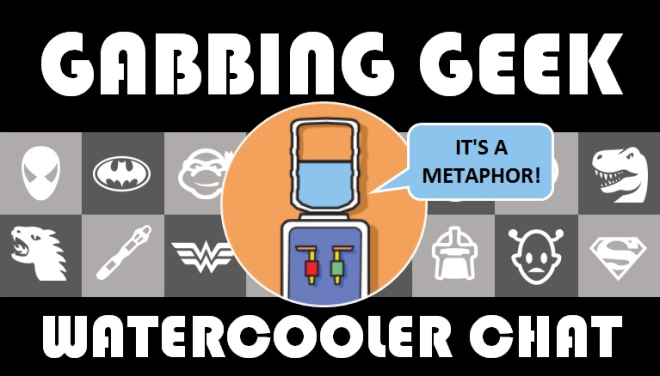 On Wednesday Robert Downey Jr. tweeted out his Age of Ultron Iron Man promo-pic. The picture was of course as awesome as one would expect, but it was what RDJ said within the tweet that was more intriguing. RDJ proceeded to say: “big announcement in 8 days…#getexcited.”

Big announcement? Big announcement? This sounds like a job for the Gabbing Geek crew. Which brings us all back to the Water cooler to discuss the possibilities of what is about to be announced.

JENNY: My guess is that RDJ will announce that he is going to be in the final Avengers Infinity War movies. At least, that is what I’m hoping for. Nothing would be better than seeing the old and the new come together for one jam-packed awesome extravaganza that will be the force to bring down Thanos. Just look at that ugly mug…the universe will need all the powers at be to wipe his smug face from existence. Including RDJ as Iron Man.

JIMMY:    What is the big announcement from Marvel that Robert Downey Jr is teasing on Twitter?  It seems to be fairly obvious.  It was tweeted alongside a poster of Iron Man in red and silver armor.

We already have Hawkeye, and Mockingbird is on Agents of S.H.I.E.L.D.  And once Age of Ultron is released we’ll have Scarlet Witch and Vision.  All that is missing is the announcement of the casting of Wonder Man and Tigra and we’ve got the West Coast Avengers!  This falls right in line with Ryan’s prediction that Infinity War will be lead by the B-list Avengers, with the triumphant return of the big two (Cap and Thor) in Infinity War Part 2.  (Yes, it should be the big three, but like Wolverine, RDJ has it in his contract that he has to appear in every movie and Marvel has already committed to giving him all the monies.  And technically, James Rhodes was the Iron Man in WCA, so if they go that route it works even better for the Bvengers theory!)
And reading between the lines of #getexcited that casting is obviously Moon Bloodgood and a time displaced Nathan Fillion from 2008, because, why not.

RYAN: My so-wild-it-could-be-true guess is that Marvel announces a news Phase 3 movie–Planet Hulk. This will give some certainty that Hulk leaves the Avengers by the end of the Ultron, but aren’t we expecting that anyway?

On a more realistic note–RDJ could just be announcing an extended Age of Ultron clip (like the infamous fighting footage from SDCC) that will be on TV or attached to the movie.

TOM: The obvious answer might be to guess Iron Man 4, but I think it’s simply an official announcement of Spider-Man in Civil War, and if anything a casting announcement.

If I were to hazard a second guess, maybe its Iron Man appearing in Guardians 2, like how Tony joined the team after the most recent relaunch.  But as much as I dig Downey as Stark, it would be nice to see some MCU franchises stand without him absorbing all the audience attention through sheer charisma.

WATSON: I expect he will announce that he has the herp’ and it is faster to just announce it at a press conference rather than call all many, many, many women he has plowed over the years. Why tease out that kind of an announcement so many days in advance? Because the man is a showman even in herp’ related news. Robert Downey, Jr. Classy lover.