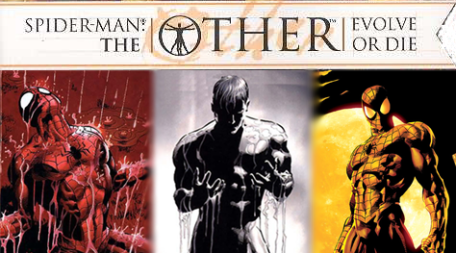 Be sure to check out the other parts of this series: Part One (Intro/Reading Order)

In this installment, we will look at the foundation that Spider-Verse is built upon.

The groundwork for the ideas at the center of Spider-Verse are rooted way back in Amazing Spider-Man Vol 2 #30 (2001) by J. Michael Straczynski and John Romita Jr.  The next handful of issues of the series would see the debuts of Ezekiel Sims and Morlun.  And also the introduction of the concepts of Spider-Totems, beings who feed on them and Ezekiel building bunkers to hide Totems from Inheritors.

The Other – The Other was a story-line that ran through all the Spider books circa 2005/2006.  Peter learns that he is dying.  Morlun shows up and says he could kill Spider-Man, but it will be more fun just to watch him get sick and die.  Peter runs the gamut consulting all the top scientific super hero minds about his infection, but is told there is nothing they can do and he should prepare for death.  Then I guess Morlun got tired of playing Hungry, Hungry Hippos because he attacks and savagely beats Spider-Man, including plucking out and eating one of his eyes.  Ewww.  Ew. Ew.  Ew.

The cops show up and Morlun decides he’ll eat the rest of Peter later after a relaxing walk.  Morlun returns to find Peter in a hospital bed and attempts to finish what he started.  Peter morphs into a more animalistic creature including stingers protruding from his wrists and slays Morlun once and for all.  Again.  And then Peter dies.

The Avengers try to decide what to do with his body and how/if to reveal his identity. Wolverine tries to complete his bucket list of sleeping with every red head in the Marvel Universe.  MJ is not interested.  In the meantime, Peter, not really dead (surprise! Only the human part of him was dead, not the spider part.), grossly sheds his skin like a cocoon and escapes…so that he can create a, uh, cocoon under the Brooklyn Bridge and have a nap.

Peter is eventually reborn once he accepts his human and spider sides.  He is back to perfect health, but is also changed, imbued with new powers.  For example, the stingers he used to kill Morlun remain.  We also get our first mention of the Great Web with Peter at it’s center.

Years later, Peter’s clone Kaine would “die” and have a similar rebirth as The Other, but embracing the spider side as opposed to the human side as Peter did.

Spider-Man: Shattered Dimensions – Dan Slott got the idea for Spider-Verse while writing the story for this video game which was released in 2010.  Fun game, fun to switch between the different Spidey’s and their different set of moves, strengths and weaknesses.  As well, the voice cast of Spidey’s spanning the previous animated incarnations: Dan Gilvezan (Spider-Man and His Amazing Friends) as Spider-Man 2099, Christopher Daniel Barnes (Spider-Man: The Animated Series) as Spider-Man Noir, Neil Patrick Harris (Spider-Man: The New Animated Series) as Amazing Spider-Man and Josh Keaton (Spectacular Spider-Man) as Ultimate Spider-Man.  You could also unlock numerous other playable costumes for Spider-Man giving it a very Spider-Verse feel.

The sequel Spider-Man: Edge of Time only focuses on Amazing Spider-Man and Spider-Man 2099.  Though it is basically more of the same, it never lives up to the quality of Shattered Dimensions.

Superior Spider-Man – The first seeds of the actual Spider-Verse event occurred in Superior Spider-Man 19, though we didn’t know so at the time.  In a crossover story that stranded Spider-Man 2099 in the current Marvel timeline, Spock (the mind of Doctor Octopus in Peter Parker’s body) disappeared into the time stream preventing a temporal event that would have destroyed us all (as they are wont to do).  It was a mystery what happened to him during the time he was missing, but all would be revealed beginning with Superior Spider-Man 32.

Original Sin – The concept behind this crossover is that someone has killed Uatu, The Watcher who’s played Peeping Tom across the multiverse for eons.  After a villain with an eyeball for a head sets off one of the Watcher’s eyes like some sort of “memory bomb”, Marvel Universe secrets are shared with anyone in the vicinity.  While most of the secrets were lame and their only reason to exist was  to have the Hulk pound on Iron Man, one secret that also seemed to start as a “<groan> really?” moment, has caught on and grown in popularity.  The origin of Silk.

When the “secrets” bomb explodes Spider-Man receives a vision/memory of a girl who was at the same science exhibit as him when he was bitten by the radioactive spider.  Apparently the spider didn’t finish with Peter and also bit Cindy Moon.  Cindy also received spider powers, seemingly more powerful than Peter’s, but couldn’t control them.  Enter Ezekiel to train her and eventually hide her away in a bunker for some reason.  Following the vision, Peter is immediately obsessed with finding her and easily locates the bunker at Ezekiel’s old office building.  The vision has also given Peter the code to the bunker, and though Cindy pleads with him not to, he opens it.

Peter justifies opening the bunker door because Morlun is dead and he’s never read a comic book before to know that no one stays dead in comics.  Cindy hasn’t either in her bunker apparently as she instantly is excited to be free, webs herself up in a terrible all web costume and names herself Silk.  For the next few issues Peter and Cindy team-up to fight some super villains…and have sex.  No kidding.  Lots and lots and lots of sex.

Up next in Part Three: Edge of Spider-Verse

12 thoughts on “A Spoiler Filled Walk On The Great Web Of Spider-Verse, Part Two”