Going hand in hand with DC’s strange mini-relaunch post Convergence, we are getting some new/updated costumes.

The biggest change has to be the new robot Batman.  Scott Snyder has been saying for months that at the end of the current End Game storyline featuring the Joker, that they would shake things up like never before in Batman’s history.  And I guess he meant it.  At this point they are also assumptions that a) anyone is in the suit and b) Bruce Wayne is in the suit.

Superman’s change in context is big, but a look we’ve mostly seen before.  It’s the same t-shirt and jeans look he wore when he first started in Action Comics by Grant Morrison when the New 52 launched (plus a new haircut) and is the look he currently sports in The New 52: Future’s End (plus a kick ass beard).  There is also a lot of speculation that Superman’s identity might be about to go public ala Spider-Man’s in Civil War.  We’ll have to wait on that one.

Wonder Woman, probably much to Jenny’s delight (“I love pants and a jacket!”), is also getting a new look that has her pretty covered from head to toe.  Gone are the super practical for crimefighting bikini bottom and bodice and enter:

On a lesser scale, Flash, Green Lantern and Green Arrow are getting some tweaks.  Lantern’s is probably the biggest as he has gone “Renegade” and now wears a gauntlet instead of a power ring and has borrowed Superman Earth-One’s hoody.

And just because, John Constatine gets a new look.  Exit the trench coat, shirt and tie, enter, Die Hard (is a Christmas movie Jenny) tank top. 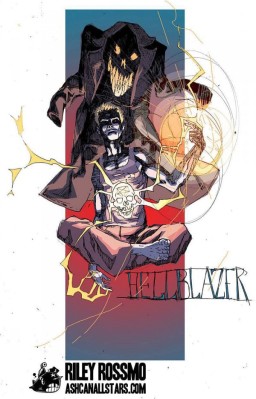 Wonder Woman Wears More Than Superman For The First Time