In this installment, we wrap up the main Spider-Verse event.

Story 1 – A short one pager that allows Dan Slott to kill off the Spider-Man from the Marvel Super Heroes arcade game.

Story 2 – A strange tale as Spider-UK recruits Kwaku Anasi from Spider-Man: Fairy Tales #2.  Spider-UK dresses up like a sheep.  That is all.

Story 4 – First and only appearance of Mexican Spider-Man Aracnido Jr.

Story 5 – One of those great “this could only happen in Spider-Verse” stories.  During the final battle against the Inheritors on Loomworld, two “unidentified” Spider-Men take a time-out to reload their web shooters and to try to figure out what makes them different.  As the two talk about symbiotes and (the original) Secret Wars we also get this gem:

When Spider-Verse was announced, and everyone was like “really?  Every Spider-Man ever?”  Slott revealed that there were eight Spider-Men they couldn’t use because: lawyers.  They included movie Spidey’s Toby Maquire and Andrew Garfield, animated Spectacular Spider-Man and MTV Animated Spider-Man.

I won’t spoil the conclusions these two come up with as to what makes them different, but I’m pretty sure the end is a disguised promo for the upcoming Secret Wars.

Also, this story has several spash pages overflowing with Spidey’s.  Many I’m sure are only here so that they can be marked off a checklist.  It does make for an interesting contrast though.  As the main Spider-Verse story has concentrated on only a small group of Spiders, there really is a sea of them out there.  And along with the two movie Spidey’s mentioned above, this story gets in “sure, they were in Spider-Verse” plugs for 1970’s TV show Nicholas Hammond Spider-Man, musical Turn Off The Dark Spider-Man and Electric Company Spider-Man.

This issue largely overlaps with the events in Amazing Spider-Man #12.  And not just passing references.  The events here have a great bearing on the conclusion of Spider-Verse including Silk finding the bunker in the safe zone and Jessica Drew sending Peter the prophecies.  You could read this issue first, but I thought it would flow better with those reveals in the main story arc.    Also, since the book ends with Silk and Spider-Gwen showing up to rescue Jessica, and a blatant “Continued in Amazing Spider-Man #13”, I didn’t like the flow of then going and reading Amazing  #12.  But then again…we don’t see Silk and Spider-Gwen leave the bunker group until Amazing #13.  Chronology Jimmy pulls his hair out.  You could also try to hack together some continuity to read back and fourth between all the books, but I’m too lazy for that.  🙂

The bulk of the issue has Jessica investigating Loomworld (she is a Steathy Spider) and she comes across the Master Weaver and The Web of Life And Destiny.  We get another of those montage splash pages showing all different spiders.  This one does bring up an interesting question: where is Venom?  He is the most prominent figure in this view of the Web.  But there have been no instances of the symbiote or Venom himself in the story.  I can understand that the symbiote itself, nor hosts like Eddie Brock or current 616 Venom Flash Thompson are Spider-Totems.  But with all the variations out there, there has to be a Peter Parker that still wears the symbiote.  No deaths.

Not surprisingly, from the onset of Spider-Verse the 616 Peter Parker has been set at a level above the rest.  He is the “greatest”.  He’s defeated Morlun twice before, etc.  But a funny thing has happened along the way, and very apparent at the beginning of this issue, maybe Ben Reilly is better.  This is obviously not the 616 Ben Reilly, but one that continued on being Spider-Man.  We are treated to a series of flashbacks about how Ben Reilly has never been beaten, including a send up of Amazing Spider-Man #700 which shows that Reilly has prevented the creation of the Superior Spider-Man in his universe.  Unfortunately, much like the Walking Dead, when a character gets built up…well, you know what happens next…

The issue begins with Kaine and Ben Reilly fighting Jennix, until Kaine completely loses it and kills him, which Ben Reilly thinks is “gone to far”.  As Jennix clones keep popping up (and Ultimate Jessica Drew joins in the fun of taking them down) the Spider-Clones realize that it is hopeless.  Unless…the cloning facility is destroyed, making Jennix and the rest of the Inheritors mortal.  With Kaine and Jessica down and about to become a meal for Jennix, Ben Reilly once again saves this day, but this time it takes the ultimate sacrifice.  Jennix survives, but Reilly and the receiver for downloading the Inheritors souls/brains/comic stuff after they die, are destroyed.  The series ends with Kaine heading to Loomworld in a rage to unleash The Other on them now that they are vulnerable.

We’ve seen a lot of death in this series, but most have been inconsequential.  A Betty Brant Spider-Girl that was seen in a What If? once 30+ years ago dies?  Not a big deal.  And though this is an alternate reality Ben Reilly, he is still played out as THE Ben Reilly and perhaps the greatest Spider-Man ever.  As such, this would seem to be the most significant death in the series.  And I get the feeling it was very much planned that way and two-fold in nature.  With all the grief that Marvel has had over the years about the Clone Saga, and all the trouble they went through to kill Ben Reilly originally, and with multiverse spanning Secret Wars on the horizon…I think they just didn’t want to have to deal with there being a Ben Reilly Spider-Man around mucking up the works.  By the sounds of it, we’ll have a plethora of Spider-Men as it is on Battleworld, including Miles Morales.  So they wanted to take Ben out of the equation.  But given his popularity, it had to be something grand, something memorable, something important.  As I’ve joked previously, a lot of these Spider/Inheritor battles have lasted two seconds.  For Ben to fight for an extended period of time and then finally sacrifice himself to set into motion the circumstances that would ultimately take down the Inheritors would be something special.  I’ve always been one of those that had a soft spot for Ben as the hoodie wearing Scarlet Spider and during his time as Spider-Man.  He will be missed.  Again.

This issue starts with Morlun and Solus returning to Loomworld with Benjy.  Jennix is there and this has to take place after Scarlet Spiders #3, as he informs them that the cloning facility is destroyed.

Back in the bunker, we get some background on the Uncle Ben we met last issue and how he became Spider-Man but gave it up after the Goblin murdered his May and Peter.  We also learn that a Mr. Otto Octavius was responsible for the nuclear wasteland that is surrounding them…much to Spock’s dismay.  As the Spiders try to decipher the scrolls sent to them by Spider-Woman, we see Silk and Spider-Gwen head out to rescue her.  (As we know from Spider-Woman #3.)   It’s also at this point that Spock realizes that 616 Peter can’t be from the past since he recognizes Spock’s hologram assistant as Anna Maria Marconi, Spock’s (at the time) current girlfriend that Peter would not have known.

For some reason (comics/we got one issue to wrap this up) 616 Spider-Girl is the only one that can read the prophecies.  The first scroll says that 1000 years from now the Spiders will wipe out the Inheritors…unless the Inheritors sacrifice The Other (Kaine), The Scion (Benjy) and The Bride (Silk).  The second scroll is a mystery, to the reader, but Anya has read it and assembles a team to go get something that “could turn this in our favor”.  They head out for Spider-Verse Team-Up #3.

Meanwhile, Kaine battles the Inheritors, going full Spider and killing Solus.  Morlun then appears to kill Kaine since they only need his blood for the ritual, they don’t need him alive.

Back in the bunker, Uncle Ben get a pep talk from the most surprising of sources, the Superior Spider-Man.  Ben Parker suits up and joins the “Spider-Friends” (really?  Did you have to call yourselves that?) to head off to the conclusion on Loomworld.  No deaths…well…maybe Kaine.  Maybe.  I’m doubtful.

Story 1 – Flashing back slightly we get more on that second scroll and that it has something to do with Karn.  Anya and her team head off for Earth-3123 which is where we find another great alternate Spider-Man from a backup story in What If? Vol 1 #23.  Aunt May, the Spider-Ma’am!

The rest of the story features Anya’s team in battle against Karn.  Not to defeat him…but to recruit him.

Story 2 – Another flashback within the confines of Amazing Spider-Man #13 that focuses on Mayday Parker and Uncle Ben.  One of the weaker stories in the arc as nothing much happens and being pre pep talk, Ben is still an outsider looking in at the group at the end.

Back in the former Earth-13 safe zone, Spider-Man 2099 and Lady Spider literally stumble upon the severly damaged remains of Leopardon.  They decide to take the robot with them to Lady Spider’s Earth-803 in hopes of repairing it.  The rest of the issues involves a lot of Osborns, The Six Men of Sinistry and finally a jump to Loomworld for our heroes.

And so we’ve finally reached the end of Spider-Verse (outside of two epilogue issues).  All the separated Spider-Teams begin to converge on Loomworld.  At some point between Amazing #13 and now, the Inheritors have captured Silk and now have all the pieces they need for their ritual.  We also learn that Solus is not quite dead after all.  His essence has been downloaded onto a crystal (o…k…) but has nowhere else to go because the cloning facility has been destroyed.  The ritual begins, with Morlun drawing the blood of The Other.  Next, the blood of The Bride.  And finally, needs that of the Scion.  But before Morlun can lower his blade, the Spider-Friends (ugh) arrive to save the day.  Joined by their new buddy Karn. 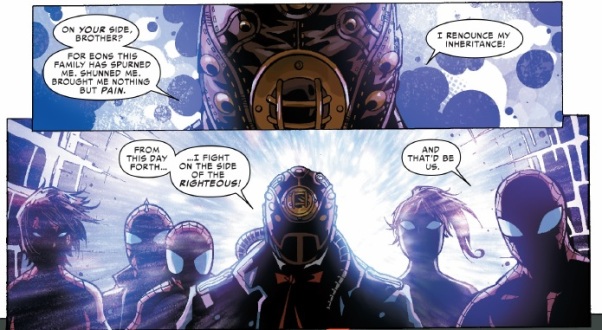 Without giving away all the details (go read the books!) the Spider-Friends (sigh) manage to save the day and usher the Inheritors away…until Spider-Verse 2.  After all the build up, I did find the finale was more whisper than roar, but like I said off the top, the fun of Spider-Verse was the journey.  No deaths.

2 thoughts on “A Spoiler Filled Walk On The Great Web Of Spider-Verse, Part Six”