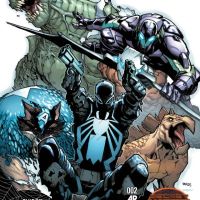 I’m teaching William Shakespeare’s Othello this week.  That means I can use a free space to lecture the loyal Gabbing Geek readers (both of them) with some hard Billy the Shakes knowledge.  Some Geeks are, after all, Drama Geeks.

For that, we will look at Iago and his motivation.

Othello, the Moor of Venice is a play about a Moor, a catch-all term for a black man to an Englishman in Shakespeare’s day, who, while being a general in the Venetian army, marries Desdemona, a Senator’s daughter.  One of Othello’s trusted advisers is Iago.  Iago, for reasons of his own, decides to ruin Othello.  Scholars have been wondering for ages why.

Does Iago ever say why?  Well, when we first encounter him in Act I, Scene I, he tells another man, Roderigo, that he, Iago, is angry about being passed over for a promotion from Othello.  The promotion went to a young man named Michael Cassio, who has no battlefield experience.  Iago has a lot.

Of course, Iago is a massive, compulsive liar.  He can be lying to Roderigo.  There’s a good chance he is.  Roderigo is not very bright and Iago lambasts him for a fool at the first opportunity alone.  Iago can and will lie to other characters.

What he can’t do is lie to the audience.  Dramatic conventions at the time mean anytime a character addresses the audience, either as an aside or a soliloquy, it must be the truth as the character understands it.  It can be false information, but the character must not know it is false information.  Iago has multiple moments of this, and he must be speaking the truth.  His first one includes the famous line, “I hate the Moor,” which would be good enough.  This is at the end of Act I, scene III and afterwards in lines 371-374 he continues:

And it is thought abroad that twixt my sheets

But I, for mere suspicion in that kind,

Will do as if for surety.

Loosely translated:  Iago says he has heard Othello has slept with his wife, and while he isn’t sure if its true or not, he will act as if it is.  That’s a lot to work on for something even he admits he isn’t certain about.

Later, in another speech, he’ll say it is true.

Iago’s wife, Emilia, will let it be known that it isn’t true, and there’s no reason not to believe her.

Later still he’ll speak about how he wants to prove himself superior to everybody.

He speaks of love for Desdemona.  Everybody loves Desdemona, but in his case not enough to make sure she gets out of this alive.

He’s also stealing from rich idiot Roderigo by pretending to act as a go-between between Roderigo and Desdemona as a way of sending her expensive gifts.  Instead, Iago is keeping the loot.

And for all that he hates the Moor Othello, he seems intent on bringing Michael Cassio to death for even less reason than hating Othello.

Why?  He’s given so many motivations, it’s become impossible to really trust any of them.  Each new motivation makes it less likely to trust any of them.  It’s almost like he either has no reason to do this sort of thing, or he’s making it up as he goes along, or even he doesn’t know why he acts this way.

Demand me nothing.  What you know, you know.

From this time forth I never will speak word.

And from there, Iago says nothing.  As far as Shakespeare’s script is concerned, Iago is alive and will be tortured to find out why he ruined the lives of Othello and Desdemona.  Iago never says what his motivations really are.

The best explanation for Iago is a long one.  Shakespeare wasn’t writing in a vacuum.  There were traditions and tropes even then.

After the fall of Rome, the Church decided plays were sinful.  Drama was banned throughout Europe.

Over time, it was realized that plays were  a good way to teach illiterate peasants Bible stories.

A bit after that, morality plays become the big thing.  These are plays where the point is not to teach a lesson from the Bible, but rather to teach a moral lesson.  The best known example is probably “Everyman,” in which a fellow named “Everyman” learns he is going to die and needs a friend to accompany him.  The friend who finally does is named “Good Deeds”.  This sort of symbolism may have been as subtle as a sledgehammer, but it happened.

Morality plays over time developed a type of character called “the Vice”.  The Vice was a charismatic figure who tempted the hero to do wrong, but got his comeuppance in the end. The Vice usually got all the best lines, the best comedic moments, and while generally a disreputable character, was very popular with audiences, for much the same way straight-arrow Superman is not as interesting to many fans as dark, tortured Batman.

As time progresses, plays become less about teaching lessons and more about entertaining an audience.  Vice characters stick around for their comedic or entertainment values, basically being bad just for the sake of being bad.  Plays in this age were generally simple and characters didn’t need more of a motivation to be bad other than they just were.

So, many scholars believe Iago is basically a Vice character, one who is allowed to sort of win in the end since it is a tragedy, no matter how much he may be punished later.  He doesn’t need a motivation like most classic Shakespearean characters, because he’s just evil.  Even other Shakespearean villains have motivations to be bad, even if it was due to racial or other stereotypes from the era.

Even more baffling is Iago is universally trusted by all the other characters.  You could make a pretty good drinking game out of Othello any time Othello is referred to simply as “the Moor” or anyone refers to Iago as “honest”.  Even other Shakespearean villains are generally at least mildly distrusted by others.  No one suspects Iago is bad.  He’s just a bad man.