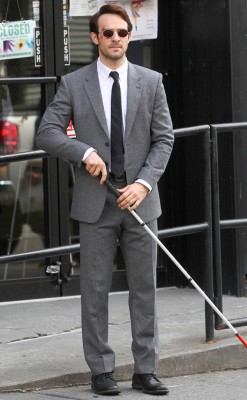 Not surprisingly, the character of Daredevil is popular in the visually impaired community.  Blinded at a young age, Matthew Murdock develops his senses to superhuman levels and fights crime on the streets of Hell’s Kitchen.  It’s easy to see how his adventures could be inspirational to those with visual impairments.  So when the much hyped and now living up to that hype Daredevil series arrived on Netflix, there was one problem.  His visually impaired fans were at a disadvantage when trying to enjoy the man without fear’s adventures.

In an applaudable move, Netflix has made Daredevil the first show on Netflix to receive the audio description treatment.  For those unaware of what this entails, Netflix’s Tracy Wright breaks it down as:

Audio description is a narration track that describes what is happening on-screen, including physical actions, facial expressions, costumes, settings and scene changes. Customers can choose audio narration just like choosing the soundtrack in a different language.

In the near future Netflix will also be adding audio descriptions to popular shows House of Cards, Orange is the New Black, Unbreakable Kimmy Schmidt and Marco Polo.