There’s a lot of TV out there, and some of it helped put Netflix on the map when it comes to original programming.

I speak of Orange Is The New Black. 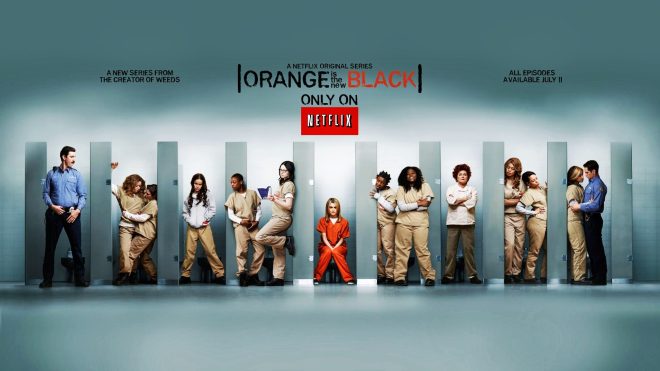 Set inside a women’s prison, the show begins by following new inmate Piper Chapman as she navigates her way through life behind bars while trying to also somehow maintain her personal space and sanity.  As the series continues, we see more and more of the lives of the other prisoners and the show gives a human face to the people locked up in the prison, while also showing the bureaucracy often holds the guards and the administrators in prisons of their own.  No one is really free in Litchfield Penitentiary.

The show does a very good job of giving most of the characters real nuance.  Given the show is based on the memoir of the real Chapman, that particular character does get the most focus, but at this point the series could continue even if Piper gets out by focusing instead on the other inmates.

The show also acts as a sort of indictment on the American prison system.  The prison is often in poor shape with poor funding.  The warden is never seen.  Many of the prisoners don’t seem particularly dangerous, which can lead the viewer to wonder about our laws, and others look as if they really belong in a mental hospital instead of a jail.  Very few of the prisoners, or the people watching over them, come across as truly bad people, and even the ones that do are often shaded in ways to make them more sympathetic, like the prison administrator who was siphoning money into her husband’s political career and who learned too late that said husband was gay and sleeping with his aide behind her back.  While she had been portrayed as apathetic at best up to that point, the show did give her moments where the viewer was asked to legitimately feel bad for her.

The series is, as noted, surprisingly nuanced.  The homophobic prison counselor is shown having a rocky marriage and he moves forward attempting to become a better counselor to his charges.  Even the hardcore methhead prisoner in jail for killing an abortion clinic nurse softens as she gets to know other people.  Most of the characters are colored with shades of grey making it impossible to classify many of them as good or bad, which is the series’ main point.

Perhaps the biggest stand-out is actress Uzo Aduba who plays the child-like, but prone to violent outbursts, inmate Suzanne “Crazy Eyes” Warren.  Suzanne’s story is perhaps the one most played for laughs at first glance (her parents appear to be upperclass white folks who adopted the African-American Suzanne), but her biggest motivation is she simply wants to be included with someone.

Really, there are probably too many people to sing praises to for this show.

Well, Jason Biggs does the best he can, but there really doesn’t seem to be any point to Piper’s fiance Larry having continuing plot lines.  He mostly seems to live to completely misunderstand life in the prison and makes things worse for Piper.  Fortunately, he’s apparently being removed from the series for season three.  His stuff always felt added on.

One thought on “Non-Geek TV From The Geek Perspective: Orange Is The New Black”