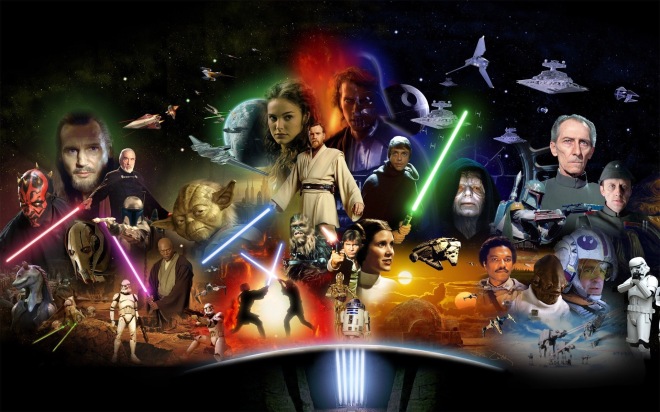 As we wrap up our Star Wars Day coverage, the Gabbing Geek staff reflected on some of their Star Wars faves.

What was your favorite Star Wars moment?
tomk : I need to pick ONE moment as a favorite moment?  That’s not very likely.  I’d need to think long and hard.  Let’s say R2 and 3PO shutting down the garbage masher.  The whole scene plays out well as a nearly impossible to escape death trap, and then the nick o’ time rescue fits in well with the movie serials that inspired the series to begin with.  Plus, 3PO initially thinks he failed hearing everyone screaming in jubilation that the plan worked.

jimmy : I’m struggling with just one moment as well. Anything from the first two movies. And does being on TV standing in line for tickets for The Phantom Menace count?  Probably not. 🙂

tomk : He was waiting for a ticket.  He didn’t know how good the movie was going to be yet.  Remember:  those trailers looked fantastic before we found out how awful Jar Jar really was, to say nothing of what a so-so actor Jake Lloyd turned out to be.

watson:  He should have felt a great disturbance in the Force, as if millions of voices suddenly cried out in terror, and were suddenly silenced.

jimmy :  Exactly. And the best part of that story was that I was playing hooky from work who stand in line…and a guy from work saw me on the news. Busted.

tomk  :Were you still employed afterwards?

jenny : When everyone is stuck in the garbage and they have to work together to get out. No one really knows each other, and they all are bitching and moaning and complaining that they have the best idea. I especially enjoy when they start crucifying C3PO and R2D2 for not working fast enough, it’s just a great scene because it’s a clusterfuck of awesomeness.

watson:  For me, the best single moment was the ad libbed line at the end of Empire when Leia professes her love to Han and he just replies back, “I know.”  That line gave birth to Indiana Jones and made Harrison Ford one of the biggest movie stars ever.

What was you favorite Star Wars character outside the principal cast?
jimmy :Does Darth Maul count as main?  If not that’s mine.

tomk :  The friggin’ rancor.  Yeah, its basically a hungry animal, but it made quite an impression for, what, a minute and a half’s screentime?  That must count for something.  How many animals can you name from the series besides the rancor?  Assuming you aren’t the type who reads and memorizes the various extended universe novels, there’s the rancor, and maybe you can point out a bantha.  And that’s it.

jenny:  Best character that’s not one of the main set cast has to be Jabba the Hut. He’s a gang lord, he’s ruffian, he’s a big ol’ son-of-a-bitch who gives no F**ks. And I love it. He’s convincingly snarky and evil, but you end up loving him just the same.

watson: Can’t argue with Uncle Owen.  True collateral damage in the quest for world domination and the license for Taco Bell collectible cups.  My pick is Admirable Ackbar.  He knew when it was a trap…

What is your favorite fight scene?

jimmy: Vader/Luke from Empire probably.
tomk : Yeah.  The best fight scene is Vader/Luke from Empire Strikes Back.  Vader never looked more frightening.  The dark lighting and the general atmosphere, with Vader almost always in shadows, made it more like Luke was fighting the entire room, not just one guy who…oh yeah, turned out to be his father.

watson:  That moment in the carbonite chamber when Vadar was waiting for him was as visually compelling a moment as the franchise has had. 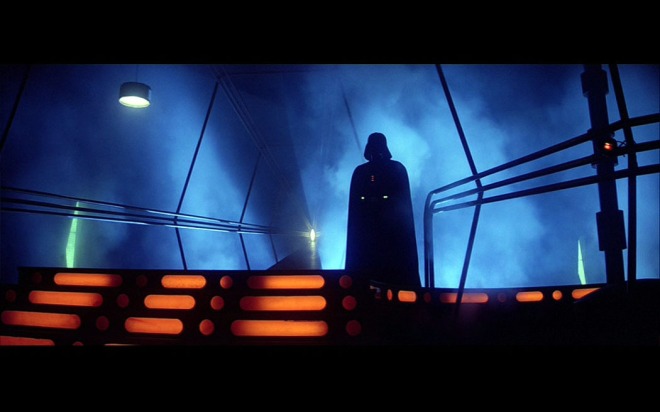 aron :Favorite fight scene might have to be the x-wings taking on the Death Star in the OG Star Wars.  Though, and please don’t crucify me, Darth Maul’s fight at the end of Menace was pretty badass for my 12 year old self. But, even then, I felt cheated by its conclusion.

jenny: I’m not going to apologize for this, but the Darth Maul fight scene with the crazy awesome John Williams music is probably the best fight scene.

ryan : “You cannot win, Anakin. I have the high ground.” – the guy who beat Darth Maul by jumping out of a shaft and slicing a better duelist in half.

watson: Heh.  Maul looked cool but did not make a lot of sense.  A microcosm of the prequels themselves…

aron :So it was a lot more disappointing for you than it was for me…

jimmy :I saw Empire and Jedi in theaters before you were born. #old.  And for sure, the hype for Phantom Menace was unreal.

aron  : Blargh.  Wow you’re old…Just kidding.  But seriously: My first exposure to Star Wars was on VHS in the 90s.  My parents are not awesome.

jimmy : My mom took me to see Empire in theaters, that makes her awesome.

aron : That must have been so awesome…

jenny: Then the 2nd best is when Luke is fighting Vader in the presence of the Emperor. It’s just beautifully dark and sad, and mesmerizing.

watson:  My favorite fight scene was the escape from the Sarlaac Pit.  That scene is as good as anything Star Wars has ever done besides the Battle of Hoth.  If we are counting ship battles, then Hoth is #1.  The AT-AT battle is in a league of its own managed by Tom Hanks…