It’s nice to see Convergence actually take itself a bit seriously this week and not just seem like the old Marvel “Assistants Editor’s Month” where it was just a free for all with no care or consequences.  They even make attempts to address recent events in the DCU and incorporate them.  Particularly interesting because they involve the former New 52, which to this point, outside of Superman’s appearance in issue #0 and the small Superman: Doomed tie-in, has been kept at a distance.

Week One: Part One, Part Two

Dick Grayson follows in the unfortunate footsteps of Barbara Gordon and has been paralyzed by a bullet from the Joker.  But Telos still needs him to help track down the other Earth 2 heroes, because for some reason he can’t sense where they are.  So Telos wraps Grayson up in some sort of liquid metal that allows him to move about even though his spine is shattered.

Meanwhile, the Earth 2 crew are helping Deimos attack the castles of Skartaris.  Superman especially is becoming suspicious of their new ally.  The castles are without their leader Warlord who is out in the wild battling lizard men.  Mid-fight, Deimos disappears and Superman and Green Lantern state their distrust of him.  Green Lantern sends Red Avatar Yolanda to find him.

Inside the castle, Shakira (not that Shakira) parlays with the time masters trapped in Vanishing Point.  She says that she will free them if they agree to fight on the side of Warlord.  They don’t, but share that Telos is wrong about the future and the past.

Back on the surface, Grayson tries to reason with Telos.  Get him to see how cruel his little game is, but Telos says he must follow his programming.  And then for no reason whatsoever, he can suddenly sense the Earth 2 heroes “deep down, below the crust”.

Yolanda manages to track down Deimos in the caverns below the castle, but is no match for him.  After he disposes of her, he confronts Shakira (not that Shakira) who is guarding the times masters.    He makes quick work of her as well.  Deimos then begins his attack on the time masters stating that “You cannot negotiate with these time masters.  You need to take their power from them!”

Telos and Grayson arrive, but they are too later.  Deimos has absorbed the powers from Vanishing Point.  Using this power he contacts Brainiac and offers to free him from his prison.  What’s really great here is that Brainiac is shown trapped inside of one of Mr. Terrific’s T-spheres, where he was placed by Ray Palmer during Future’s End. 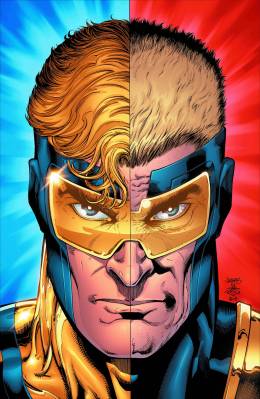 For the full story leading up to this issue, you should go back and read the Future’s End: Booster Gold one shot.  Which sees New 52 Booster being caged with Pre-Flashpoint Booster and New 52 Booster giving up the location of Vanishing Point while under duress.  I like how this and Convergence #4 have tied into past DCU events to give them and this event some credence.

As New 52 Booster lies in his cell, still a captive, Pre-Flashpoint Rip Hunter and Skeets comes to his rescue.  Rip frees him and then informs Booster that they are in Castle Deimos in Skataris and that every time traveler he’s ever heard of was being held captive there.  Including the Pre-Flashpoint Booster Gold and his sister Michelle.  Rip and New 52 Booster free them, and Rip informs PF Booster that Booster is dying.  And that he hasn’t been jumping through time as he believed, but actually jumping from city to city on Telos.  And with that, PF Booster uncontrollably disappears, headed for another city.

Rip, Michelle, Skeets and N52 Booster escape an attack by Deimos’s Lizard men.  On the surface of Telos we see that this issue is taking place before the domes came down.  They manage to track PF Booster to the Metropolis of the 30th Century.  The dome is still up, but luckily they happened to know a security code to the front door.  They enter and are immediately attacked by the Legion of Super-heroes.  A surprising continuity error occurs next as the Legion still have their powers.

During the skirmish, Michelle finds PF Booster who is uncontrollably jumping again.  He winds up in a city where he is shocked to find his buddy Blue Beetle alive and well.  In the Pre-Flashpoint universe Blue Beetle is dead, murdered by Maxwell Lord. 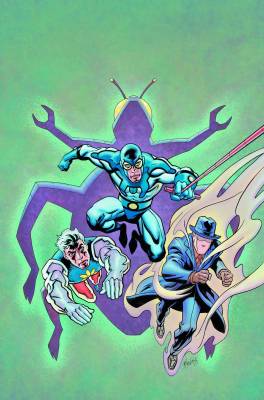 I read this book next wondering if it tied into Booster Gold because of the big Blue Beetle ending there, but alas, it does not.  This is the Blue Beetle and other heroes of Earth-Four.

In something of a theme this week, tensions are mounting under the dome.  In this case, the army, lead by a depowered Captain Atom, attacks and kills a group of protesters.

Meanwhile, Blue Beetle Ted Kord has been attempting to break through the dome.  Kord has requested that Atom drop by to see what he has done, to which he complies.  Kord blasts the dome with his latest creation, but it doesn’t even make a scratch.  Though suddenly Captain Atom gets his powers back.  No one is sure why and Captain Atom leaves to battle his arch nemesis Dr. Spectro who also just got his powers back.

Remember I said this doesn’t tie into Booster Gold?  Well it doesn’t in terms of Booster meeting Blue Beetle at the end of that title, but it does tie into the overall arc as pre-Flashpoint Booster appears and asks “Can anyone tell me where I am?”  As heroes seem to do, Captain Atom mistakes Booster for an ally of Dr. Spectro and blasts him.  Blue Beetle arrives just as Booster jumps away again.  Booster is back on to Blue Beetle so he doesn’t see Ted Kord alive and well, he will have to wait until the Booster Gold issue above.

As Booster disappears, Captain Atom and Dr. Spectro lose their powers again.  Shortly after, Telos arrives with his message.  The message has been the same for everyone, but this one seems different as Telos terraforms a building to his shape and delivers it that way.  As the issue ends, the dome begins to come down.

On the Pre-Crisis Earth-Two, Batman is dead.  Dick Grayson continues to fight in his honor, but refuses to take his place as Batman.  He continues to go by the name Robin and wears a horrible amalgamation of the Robin and Batman costumes.  Bruce Wayne’s daughter fights by his side as The Huntress.  She encourages Dick to step out of Bruce Wayne’s shadow and take up the mantle, but he refuses.

Another of my geek DC blind spots is the popular Elseworlds title Red Son by Mark Millar.  It asks the question “what if Superman had been raised in the Soviet Union?”  I can’t speak for Millar’s story, but the Superman here comes off like, well, Superman.  He lives in Russia and wears an altered version of his well known costume, but he still fights for truth, justice and uh…bears riding unicycles.

But under the dome, the Russia people are growing weary and ready to revolt.  Superman tries to defuse the situation by deflecting the blame on himself.  He tells the people that he is responsible for the dome to protect them from an alien invasion and he pleads for patience.  When things seem to be at their absolute bleakest, the dome drops.

Meanwhile on Earth-Two, Robin and Huntress head out on patrol after the dome drops.  As they drive through the city they are teleported to the city of Red Son and Superman is not happy to see them.  He gives them the chance to surrender but Huntress decides to take matters into her own hands and sends a barrage of missiles from the Batmobile that barely scratch Superman.

Robin is pissed as he stands by the same “we do not kill” mantra that is tearing a different version of Dick Grayson and his wife Starfire apart over in New Teen Titans.  He exits the Batmobile and has a civilized conversation with Superman.  Huntress disagrees with this tactic and tries to escape.  Superman easily stops her and rises into the air with the Batmobile.  Believing it to be the only way to save their city, she self destructs the Batmobile taking her and Superman with it.  (Until next issue…)

Another Earth-Two/Red Son story focusing on the Russian Superman.  I was fairly worried that this would make no sense in conjunction with the Detective Comic issue, but it seems to stare clear of any massive continuity issues.

The Earth-Two side of this issue focuses on Superman, Lois and Superman’s cousin Power Girl.  The Kryptonians are trying to adapt to life under the dome without their powers.  The major focus being on Power Girl; her origins and her life now that involves getting tired, going to the dentist and having to work out to keep the pounds off.

While the Red Son side of things does feature Superman again, it is mainly a story belonging to Lex Luthor and his wife Lois.  In a nice bit of continuity with the Detective issue, the people are losing their faith and ready to revolt.  Lex has become an advisor to Stalin, but an infuriating one that Stalin hates.  Luthor is as smug as ever since his “superpower”, his mind, is not affected by the dampening powers of the dome.  Superman warns Lex to stop antagonizing Stalin or he will not be able to help Lex again.

Shortly after the dome drops and we see the Red Son champion preparing for assault on Earth-Two.  But it is not a continuity destroying Superman, but Wonder Woman. 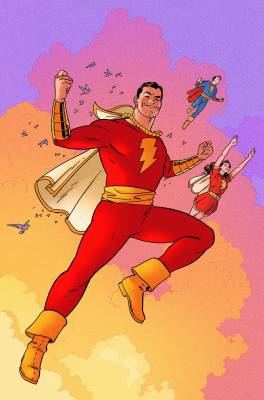 This issue shifts away from Earth-Two/Red Son and focuses on Earth-S (the pre-Crisis world where Captain Marvel and the Marvel family reside) and the Gotham City of another Elseworlds book Gotham By Gaslight.  Actually, except for the last page you can ignore the “and” part of that last sentence.  While the book has some implications from the dome, namely the Marvel family without their powers, it is for the most part just a throwback style story.  Recommended if you like the Captain Marvel stories of that era, but has little tie-in to Convergence.

As an aside, this week also features a Convergence reference in Justice League #40.  The issue is a prolouge to the upcoming “Darkseid War”, which seems like it is being set up as a Crisis like event as Darkseid battles the Anti-Monitor, with the fate of the multiverse hanging in the balance.  It is nice to see Convergence getting mentioned in a mainstream DC book, cementing it in whatever DC calls continuity these days.  However, in a conversation between the Anti-Monitor and Metron, Brainiac and his convergence of timelines and universes is quickly dismissed and lends credence to the thought that at the end of the day Convergence will have no lasting effects on the DCU come next month.

Look for part two of week four coming soon as we wrap up the first month of Convergence and get ready to wrap back around for the second issues of the stories that began in week one.

8 thoughts on “Jimmy Attempts To Read All Of Convergence: Week Four Part One”