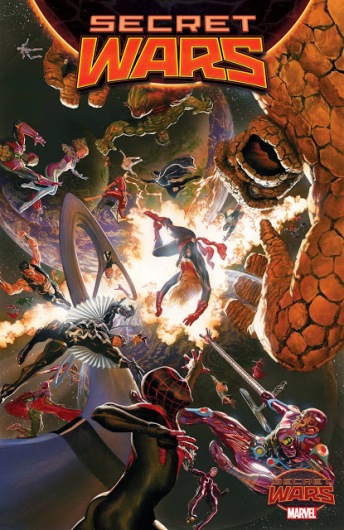 Marvel Comics released the first issue of the new Secret Wars this past week.  The issue in question ended with the destruction of both the main Marvel and Ultimate universes aside from a handful of survivors on both sides.

How likely is it that this new status quo will remain?  What do you think?

Death on this scale in a comic book is nothing new.  Some big cosmic or mystical threat shows up and starts killing people left and right.  Sometimes it isn’t even outright killing someone.  Marv Wolfman and George Perez tried to up the threat of Trigon in the pages of New Teen Titans while simultaneously leaving the Titans alone to deal with the threat of him.  In short order, Trigon used his awesome power to, er, turn everybody else in the world that might come close to opposing him into what looked like a pile of agonized mud.  Various figures in places like Gotham City and the Justice League satellite were shown as piles of gloop with faces etched in pain but being otherwise incapable of doing anything.

Did we doubt for a minute that the Titans would save the day?  Of course not.

Any time a big threat shows up and starts wiping out large numbers of characters, especially big name ones, you can pretty much know its temporary.  Threats like this are used to both establish the bad guy’s awesome power and force very specific characters to have to somehow save the day.

Usually the end of the storyline will show everything more or less back the way it was before said muckety-muck villain got started.  Sometimes its quite literal.  The six-issue Infinity Gauntlet mini-series depicts Thanos, possessing the title glove, start off by wiping out half the sentient life-forms in the entire universe.  He then goes on to badly beat, and mostly kill, a team of surviving superheroes, and then manhandle most of the big cosmic entities of the Marvel universe before he accidentally lets his deranged granddaughter (or deranged pirate who thinks she’s his granddaughter, it’s never been clarified in the comics) Nebula swipe the gauntlet and use it to turn everything back to the way it was 24 hours earlier, erasing everything Thanos had done for the majority of the mini-series.

I have no idea how the new Secret Wars is going to end, even if it is proclaiming an “end” to the Marvel Universe.  I already know it isn’t.  For one thing, Marvel didn’t cancel all its books.  For another, post-Secret Wars titles have already been announced, some featuring characters we saw die, or at least not survive the encounter.  Do I really think Marvel will limit all future books to just the handful of characters on the life raft?  Do I really think Marvel would take out most of the Fantastic Four, especially the kids, and be done with it no matter how much they may try to undermine Fox Pictures?  That’s way too cold.

Besides, Hickman himself already has shown a future post-Secret Wars during his Avengers run.  Franklin Richards said the heroes would not stop the last Incursion.  It was going to happen.  And somehow there was still a future.

I look at it like an old action movie.  I know Arnold or Sly is going to be alive at the end of the film, and the overqualified actor playing the villain is probably going to be dead.  Instead, its just a matter of wanting to see how it happens and not if it happens.

So, let’s continue to play along and we’ll see everyone is probably going to be OK.

Except for most of the Ultimate Universe.  That place is probably toast.