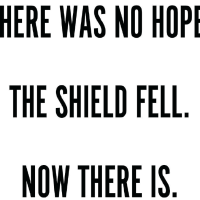 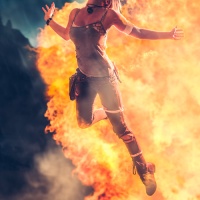 2015 is almost half done but Mad Max: Fury Road is shaping up to be the best movie of the year for geeks.  Admittedly, there’s a strong contender come December (if you don’t know what I mean, check out our awesome Geek Calendar) but from my spoiler-free review and Tom’s review too it’s obvious that we all think Fury Road is shiny and glorious.

I left the theater after Fury Road amazed at what I’d seen.  And a bit confused by something.  It took me a while to pin it down, but ultimately it led me to reconsider the ending of Beyond Thunderdome in an interesting way.  Did the third Mad Max film end in a completely different way than we thought for the past three decades?  Read more after the break.

Mad Max in Fury Road has certainly wandered closer to his name.  In the movie, besides being resourceful in his efforts to escape from his captors, he’s also going through some mental issues.  Max is plagued by flashes of a small girl asking Max to help her.  Reaching out, she beckons to him and he reacts in fear and surprise.  This struck me as an odd reaction.  Because I remember Beyond Thunderdome.  For a post-apocalyptic movie, the ending of Beyond Thunderdome is about as close to “…and they lived happily ever after.” as you can get.

Quick recap of Beyond Thunderdome ending: Max, on the run from Tina Turner for making fun of her tassles, also has a group of kids that look to him as their personal savior.  He ends up playing the part by loading the kids into a truck/plane hybrid and clearing a path for the plane to take off.  He’s left behind and when Tina catches up to him she doesn’t kill him but leaves him alone.  Then we get this scene to follow up on the children:

Wow.  The kids made it.  And they’re safe.  Thriving, even.  Telling the tale every night so’s they be the ones remembering.  Ack, sorry, easy to slip into Thunderkid-talk.  Happy ending, even if Max is back to wandering the wasteland in the final shot.  But that’s okay because Max is Max and he’ll survive.

So why would Max be haunted by these flashbacks?  Why would Max in Fury Road see this girl and recoil in fear?  This isn’t Max’s child (he had a son who was killed in the first movie) because it’s a girl and calls him “Max” instead of “Daddy” or “Dad” or “Nutso” or whatever post-apocalyptic Australian kids call their father.  And he shouldn’t recoil in fear if he’s remembering someone he saved, someone he sacrificed himself for and saw her fly into the sunset.

That’s when it hit me.

What if Max dreamed the ending of Thunderdome?

What if that plane didn’t take off, or did for a short while and then crashed?  What if he saw it and knew his sacrifice was in vain and this whole group of innocents has just died because of him?  That could be tough to handle.  Might cause him to break down.  Maybe in breaking down, Tina Turner takes pity on him and leaves him alone–also explaining that dramatic shift on her part as well.

The Mad part of Mad Max wasn’t truly insanity, it was that this was a man pushed over his limits by harsh world similar to other action or comic book heroes.  But what if this time it came true and Max went too far?  The ending was dreamed up to help him deal with it in his wanderings but the reality stuck with him.  Max lived to survive another day but after several years, maybe the illusion is starting to fade and now he’s constantly haunted by the ghosts of the children he couldn’t help?

This could explain why Max has no interest in helping other people at the start of Fury Road–even though his character at the end of Beyond Thunderdome is all about helping others.  And it takes a close brush with death for him to shake free of the dreams about halfway through Fury Road.  Perhaps now he sees a true path to helping others or he just doesn’t care if he succeeds anymore so long as he tries.

I have no idea if this was intentionally done to make us rethink Thunderdome, but I don’t see another way to reconcile those flashes.  If you see one, let me know in the comments, otherwise I like to think of this as yet another layer to the amazing Fury Road.

2 thoughts on “Did Fury Road Rewrite The Ending To Beyond Thunderdome?”