I’m back baby!  (Editor’s Note: Jimmy, you used that two posts ago.)  As Convergence continues its trek towards being the most forgettable crossover event ever.  The tie ins are not bad, but seem to have little to no bearing on the main book and vice versa.  If you like a particular DC character from a particular era, pick up those books.  Otherwise, just pick up the main mini-series, which may be of interest.

Picking up where we left off last issue, and what seems like weeks ago (Editor’s Note: Sigh), Deimos has made contact with Brainiac who is still trapped in the T-Sphere he was imprisoned in in Future’s End.  In a surprise twist and much to Brainiac’s chagrin, Deimos gives us Telos’ origin.

It seems that Telos was once a man and Brianiac came along as he does to destroy his world.  Telos agreed to a life of eternal solitude to Brainiac if he let his wife and child live.  Brainiac took Telos and transformed him into the being he is today.  As the Earth-2 heroes take the battle again to Deimos, they are optimistic that Telos will now side with them, but he remains aligned with Briainac.  Which works out ok too, as Brainiac also wants Deimos dead.  With no other recourse, they join Telos in trying to free Brainiac.  Which doesn’t last long as Deimos uses his new found power to banish him again.

Meanwhile, Warlord continues to be set up to have a huge role in all this and he fights the lizard men to make his way back to his castle. Losing his love Tara in the process.  When he finally reaches the castle, he confronts Deimos.  Remember I said it looked like Warlord would have a huge role potentially here?  Nevermind, Deimos turns him to dust by aging him faster than Watson.

With that, the inner sanctum of the castle collapses.  The Earth-2 heroes make it out except for Yolanda who is rescued by Deimos.  Deimos takes her to Brainiac’s former occupation chamber and talks to her about the first “convergence”.  The Crisis.  Deimos then appears to re-raise the domes and informs the champions of each city that they no longer need to fight.  He has saved them all and will protect them…for a price.

Pre-Flashpoint Batman, Robin, Red Hood and his sidekick Scarlet fight a sea of robotic kewpie dolls as The Extremists look on.  As our bat heroes quickly begin to dispense of the dolls, The Extremists finally join the battle.

During the extended fight sequence, Batman decides to take advantage of the situation.  He allows himself to be captured forcing Damian and Jason Todd to put aside their differences and start working together to save him.  And in the end, isn’t that what it’s all about?  Your ninja assassin son and his adopted, risen from the dead brother getting along at the end of the world?

Along the way we get reference to an earthquake that will get mentioned in the other books this week as well.  It’s not clear if the earthquake is tied to the battle between Deimos, Telos and the Earth-2 heroes, or if it is is something that will be explained in a subsequent issue.  But I’m guessing it has to be that battle since the end of Convergence #5 seems to take place after these tie-ins.  At the very least, it takes place after Superman #2 as Lois and Clark’s son has been born.

Pre-Flashpoint Superman continues his fight against the Flashpoint versions of Captain Marvel, Cyborg and Green Lantern.  Things are complicated, as they usually are, by Jimmy Olsen and his flying car who arrives to “help”.  Superman has to spend all his time and energy saving him.

Superman manages to incapacitate Cyborg, but Captain Thunder seems to be getting the best of him.  That is until Superman’s super hearing picks up Lois’ cries for help.  Captain Thunder doesn’t stand much of a chance after that.  Green Lantern Abin Sur takes up the fight (why didn’t they all attack at the same time?) only to find the tables turned as Jimmy Olsen blasts him with some form of canon from his flying car.

Meanwhile, Subject One (the Flashpoint Superman) has arrived at the Flashpoint Batcave with a very pregnant Lois Lane.  She is in labor and Subject One “loves her”, so he has brought her to the only Doctor he knows…Dr. Thomas Wayne, aka Batman.

Superman tracks them down (as that pesky earthquake hits) and Thomas Wayne informs them that he hasn’t been a doctor since Bruce was gunned down.  He cannot help them, but they can use his equipment.  So it’s up to Superman to put his super medical skills to good use and deliver their son.

Pre-Flashpoint Nightwing (I’m still miffed I’m not getting a Dick Grayson Batman story out of all this.  I guess I’ll have to wait for Earth-2: Society where I’m 98.6% sure he will be the new Batman.) believes he is heading off to fight the Flashpoint Hawkman and Hawkwoman alone.  When your girlfriend turns down your marriage proposal, you probably need to blow off some steam alone anyway.

Nightwing puts up a good fight, but is outmatched against the Hawks.  That is until he learns he is not alone.  Oracle has called in a secret weapon to aid him.  Broadcasting on the frequency that feeds the Hawks helmets, Black Canary boggles their mind with her mightiest scream.  Removing their helmets to stop the pain, they also make themselves more vulnerable to Nightwings Escrima sticks.

Not to be left out, Oracle joins the fray in a helicopter that doesn’t last long against Hawkwoman.  Once on the ground she retrives her wheelchair and some sticks of her own and reminds everyone not to underestimate her.  She reminds them that once upon a time, Barbara Gordon was Batgirl.

With the Hawks on the verge of defeat, they call upon their Absorbascons (I don’t know either, some kind of flying weapons) to destroy Gotham.  But Oracle has other plans.  With a move the guys in Independence Day would be proud of, she has hacked the drones that belong to Telos that are keeping people within the Gotham boundaries.  They make quick work of the Absorbascons.  With the defeat, Oracle invites the Hawks to come and live in their Gotham, since the assumption is that because they lost the Flashpoint Gotham will be destroyed.

With the danger subsided, Barbara accepts Nightwings proposal.  They are married shortly after in a scene that seems to clearly take place after all this Convergence hubbub and implies they’ll still be around  in some capacity in the multiverse when all is said and done 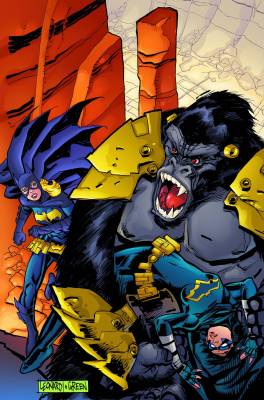 I mentioned when I reviewed Batgirl #1 that I hadn’t read much of Stephanie Brown’s adventures.  Be it Spoiler or Robin or Batgirl.  I sure hope that back in the day though, she wasn’t as annoying as I found her here.  Maybe it is just the writers particular voice, or the year of retirement under the dome that has done it to her.

The majority of this issue is made up of a fight between the Batgirls, Red Robin and Catman versus Gorilla Grodd.  Since Catman comes from the Flashpoint universe like Grodd, and the foursome seem to stand no chance against the pyshic ape, Stephanie has a plan.  Catman agrees to take a dive and allows Batgirl to knock him out.  Since Steph has won, all combatants are transported back to their respective cities.

The last third of the book spends its time (I would assume) attempting to appease Stephanie Brown fans, but giving her a proper send off.  Well, at the very least, hooking her back up with Tim Drake.

Before getting into the story, I just wanted to point out one of the greatest DC covers ever.  Look up at that thing.  Pure gold.

And as you can tell from that cover (or if you read issue 1) it’s Harley Quinn versus Captain Carrot.  Thanks to Poison Ivy and Catwoman last issue, Harley is once again Bat-shit crazy.  But like her pal Mr. J, she has the brains to go with it.  She keeps Captain Carrot on his toes and he is completely confused as to how to defeat her.

It’s a very fun issue with a (wait for it) earthquake to finish things up.  At the same time it is heartbreaking in a way as Harley leaves her “normal” life and love behind and heads back out to adventure with her Gotham Sirens compadres.

And with that, I’m one step closer to catching up.  Still a ways behind.  Look for part 2 (hopefully) early next week.

6 thoughts on “Jimmy Attempts To Read All Of Convergence: Week Five Part One”