There’s a lot of TV out there, and some it comes animated on Sundays.

No, not The Simpsons.  Can you believe it’s still on TV?  Harry Shearer can’t.  Not Family Guy either.  I think even Seth McFarlane probably questions why that show’s still on the air.  No, I want to discuss Bob’s Burgers this week. 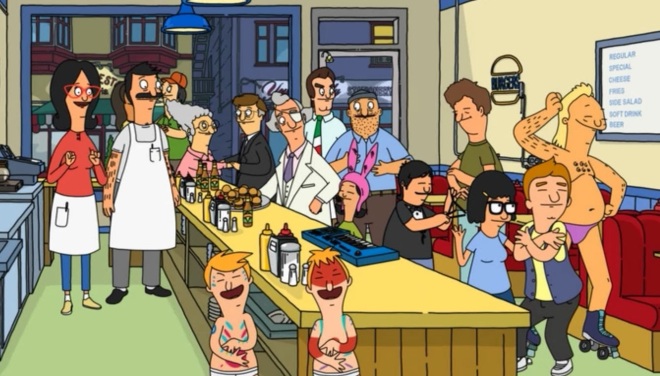 This animated comedy deals with the Belcher family, parents Bob and Linda, and their three kids Tina, Gene, and Louise, as they run a small burger joint in an unnamed seaside town.

The show is rather nuts in a good way.  Bob, though frequently exasperated, is probably the sane member of the family unless he’s dealing with his across-the-street rival Jimmy Pesto.  Wife Linda is a little too enthusiastic about odd things.  Oldest daughter Tina is an introvert with a thing for zombie sex and a budding libido who wants to break out of her own shell.  Son Gene is loudly enthusiastic about just about everything.   And youngest daughter Louise is something of a psychopath.  The supporting cast is filled with many additional oddballs, and the cast is made up of a number of very funny comedic actors, including Archer lead voice H. Jon Benjamin as Bob and rising comedy star Kristen Schaal as Louise, plus others in notable supporting roles including Kevin Kline as their one-eyed landlord and Sarah Silverman and her sister Laura as a pair of addle-brained twin boys Louise’s age.

The writing is sharp, and despite the fact that only one of the Belcher family is voiced by female actor, you wouldn’t know it to listen to Tina or Linda at times.  The show manages to show the slow escalation of whatever problem Bob is facing for the week and keep it character-oriented.

In fact, Dan Mintz’s Tina may be the break out character.  As weird as her family is, she may be the weirdest, but in a way that perhaps represents a teenage girl finding herself.  I have to say I personally find Louise, as the main instigator of the family, and someone who seems to know the worst thing to say in any given situation, to be a personal favorite.  She’s a borderline psychopath, and not on the good side of that borderline.

Quick-eyed viewers will note in the opening credits the business to Bob’s restaurant’s right side always changes, as does the name of the pest control company that shows up.

As an added bonus, season four of Archer opened with Archer in a fugue state believing he was Bob.  John Roberts had a couple lines as Linda, but the kids remained oddly silent.

Well, it may not be the show for people who prefer TV characters with chins.

3 thoughts on “Non-Geek TV From The Geek Perspective: Bob’s Burgers”