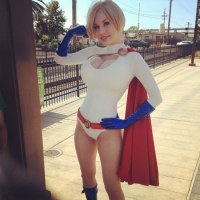 Convergence clues up five more pre-Zero Hour/Wildstorm/Kingdom Come crossovers that will likely have little significance to the event as a whole.  There are quite a number of deaths in these issues.  I’m starting to suspect that  Telos is going to end up sticking around the main DCU with all those cities intact, so maybe those deaths will have meaning in the near future.  (As I write this, Convergence #8 has not been released yet.  But once you’re reading this it will have been and you will know the fate of Telos and it’s inhabitants.)

It’s Aquaman versus Deathblow as the Wildstorm Universe continues to come off like a bunch of jerks.  Aquaman takes everything Deathblow can dish out, and retaliates with one mighty punch that breaks Deathblow’s neck and kills him.  Game over.

If you’re not familiar with Deathblow, he is basically the Punisher with Wolverine’s healing factor.  He’s quickly back on the attack.

Aquaman shoots at Deathblow with his harpoon hand and appears to miss.  But Deathblow was not his target, and he punctures a coolant pipe spraying water everywhere and instantly making Aquaman stronger.

Deathblow escapes and enacts his “insurance policy”.  When Deathblow was hacking computers last issue he came across a security measure that the scientists of Aquaman’s residence had come up with.  A dehydrator system was installed.  And as the heat soars and the sprinkler systems have been disengaged, Aquaman weakens quickly.

Deathblow moves in for the kill while the scientists, who are now Aquaman’s friends, send him cryptic messages about what to do.  Deathblow doesn’t understand, but Aquaman does.  He plunges his harpoon into Deathblow’s jugular and blood begins to spray everywhere.  Arthur regains his strength since “Blood.  It’s the chemical equivalent of sea water.”

Defeated, Deathblow disintegrates, as does San Diego.  (Azreal is gonna be pissed.)

Shortly afterwards the earthquake hits and we get one of the few “to be continued in Convergence” taglines. 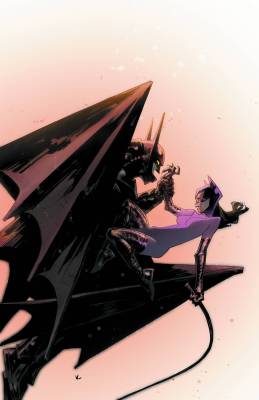 Kingdom Come Batman has arrived in Pre-Zero Hour Metropolis.  While he has heard Telos’ message he seems overly confused about where he is and what he is doing there. Things that should be obvious to the world’s greatest detective. Maybe his age is catching up with him.

Though Catwoman and Batman are supposed to do battle, they don’t get much of a chance as Intergang attacks them both.  Catwoman manages to get her doctor friend she rescued last issue to safety, while Bats takes out the thugs.

Batman then tracks down Catwoman, who just happens to have a mini EMP in her bag of tricks and disables Batman’s armor.  He crashes to the ground.  Catwoman follows and pounces on top of him.  To buy time for his suit to reboot, Batman engages Selina in a little small talk.  Getting to know her as a new found vigilante and not the criminal and thief that his version of Catwoman was in Kingdom come.

When Batman’s suit is fully recovered, he agrees to join Catwoman against Telos.  Intergang has other ideas.  They attack again, and their leader Mannheim is more than they bargained for.  He somehow has a jacket from Apokolips which makes him invulnerable.  He knocks out Catwoman and Batman doesn’t fare much better.  As he is about to kill Batman, Catwoman recovers and somehow knows that the power source for the jacket is conveniently exposed on Mannheim’s back.  She destroys it and Bats does the rest.

The pair still have a problem though.  The citizens of Gotham have taken up arms against Batman.  They know that if he wins, their city will be destroyed.  And really, what chance does Catwoman have?  Cooler heads prevail as Catwoman convinces them to let her and Batman try to save both cities.  There are good people in each that deserve to live.

Cue the standard issue two earthquakes.  The people panic, thinking Telos is destroying the city and one of the men fire on Batman.  (He claims it was an accident.  Sure, buddy.  Sure.)  But Batman is never hit as Catwoman jumps in front of him and takes the bullet in the chest.  With her dying breath she asks Batman to save both cities.  He’s not sure it works like that, but he promises to try. 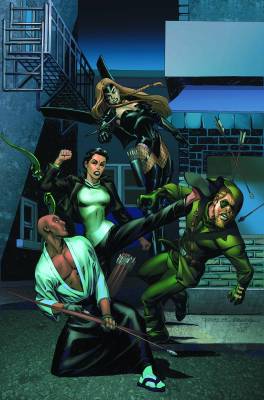 This issue starts a little back in time from the end of issue one.  In the Kingdom Come Metropolis, Dinah and Oliver Queen, their daughter Livy and Bruce Wayne monitor the goings on of the supervillians whose powers have also returned with the dome dropping.  A few strange things here.  One, it appears they are in the Batcave.  Now, it’s quite possible that Batman has multiple Batcaves around, but keep in mind this is Metroplis not Gotham.  Bats also says that there’s still no sign of Superman.  I think the writer has his universes mixed up as Kingdom Come Supes is around and over kicking Superboy’s ass in Pre-Zero Hour Metropolis.  The same Pre-Zero Hour Metropolis that is missing it’s Superman.  And one would assume that this is before Batman gets sent to ZH Metropolis to battle Catwoman.

It’s not long before Livy and Dinah are transported away and we’ve come full circle to the end of issue one as they run into ZH Green Arrow and his son Conner.  A good portion of the rest of the issue is like a family reunion for four people that have just met.

One interesting aspect here that is different from anywhere else during this event that I can remember, our four “champions” are not fighting within one of their cities.  They have all been transported to an empty replica of Metropolis and the city is floating in the sky.

The crew are enjoying getting to know each other until they realize that there is no one else there, it is each other they are supposed to fight.  They initially refuse.  But Telos shows up and tells them that if they refuse to fight they and their cities will cease to exist.

And that’s all it takes for the Kingdom Come crew to switch into kill or be killed mode.  The fight is on!  The Arrows do what they can, but they have neither the equipment nor the experience of the Kingdom Come family.  And when Livy unleashes her paralyzing whistle (yes, it’s a thing) it’s game over.  Both families are then teleported back to their respective cities.

When Oliver and Conner finally awaken, they are surprised that they still exist since they lost the challenge.  Then our old friend the earthquake hits and Oliver remarks that “Something’s changed…I can feel it…”  And whatever the future brings, Oliver is just glad he gets to spend it with his son.
Convergence Justice League International #2 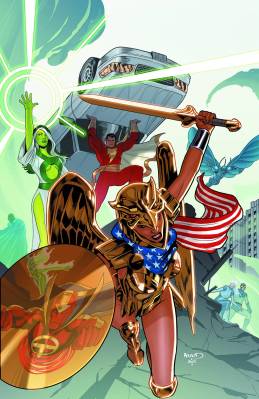 If you read Part One of my Week Six post you will know that I found it odd that Kingdom Come Superman and Wonder Woman have sided with Telos in Convergence #6. But the way Wonder Woman dives into battle here versus the JLI, refusing to comprise, maybe it makes sense for her.

In fairness she does meet with pre-Zero Hour Blue Beetle to discuss terms of surrender, but neither will stand down.  They do agree to take the fight outside the city to avoid wanton destruction.

During the battle the pre-Zero Hour and Kingdom Come Blue Beetles team up.  (We’ll ignore the fact that Blue Beetle should be dead in Kingdom Come.)  Neither wants to fight and are both determined to get the teams to work together against Telos.  The two have little time for talk as they are attacked by Telos’ drones for straying too far outside the city.

When the earthquake hits, Kingdom Come Blue Beetle is injured as he is pinned under some rubble.  ZH Blue Beetle rescues him and the pair return to the main battle…to find it over.  The JLI was just no match for the Kingdom Come heroes.

Wonder Woman informs ZH Blue Beetle that his friends are unconscious but otherwise unharmed.  They came for victory, not for death, and they have achieved it.  (Maybe she’s not so bad after all.  See, she’d never side with Deimos.)  With that, Captain Marvel whisks them back home.

The JLI return home and prepare themselves to battle Telos “until the end”.

The issue finishes with Blue Beetle returing to his room to find himself doused in a bucket of water as balloons and confetti spray everywhere.  It’s apparently Ted Kord’s birthday and his pal Booster Gold dropped in from the future to set up the whole thing.  (We’ll just pretend that makes sense with everything going on.) 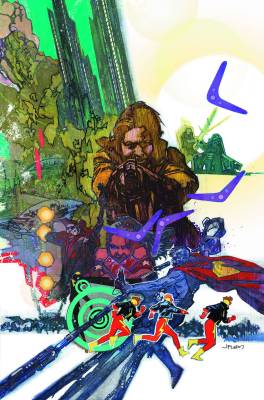 In what could be our last look at the pre-Zero Hour universe until Convergence 2, the Suicide Squad is preparing for their raid on the Kingdom Come Metropolis.  Or more specifically, Green Lantern’s low orbiting New Oa station.  (It might be the last we see of Kingdom Come for a while too, but I think a return to that universe in some way in the future is much more likely.)

Amanda Waller and her Suicide Squad have allied themselves with the Kingdom Come Lex Luthor, who says that he will help them betray his city.  As they arrive at New Oa they find that Green Lantern has some allies of his own.  The Kingdom Come Justice League.

As the battle ensues, Cyborg Superman manages to override his cranial implant that is supposed to keep him in line or he loses his head.  Now free, he sets out to kill everybody, including the Squad.  Star Sapphire confronts Cyborg Superman, and being unable to defeat him, blows herself up and takes him with her.  “This is for the people of Coast City, you bastard.”  While she does manage to kill the cyborg, she pretty much kills everyone else as well.  Good plan there.

Luthor and Green Lantern have survived.  Powered by a yellow ring, Luthor is getting the best of Green Lantern until Boomerang puts a bullet through his head.  It seems he and not Luthor is the real traitor that we saw last issue.  You see, Boomerang has terminal cancer, likely caused by one mission or another that the Squad had been on.  And if he was going to go out, he was taking everybody responsible out with him.  Which at this point only leaves a dying Amanda Waller to finish off.

The final bullet is shot, but stopped by Green Lantern.  “We’ve already won.  And enough people are dead.”  Cue the earthquake…on the floating city.  Ummm…

Whatever it is, it is a distraction long enough for Amanda Waller to trigger a suicide bomb, destroying New Oa and killing everyone on board.

And Week Six is in the books.  Next up, Week Seven.  (Yes I know Week Eight, the Week Finale has just been released…)

3 thoughts on “Jimmy Attempts To Read All Of Convergence: Week Six Part Two”