True confession time:  as much as I find Bone a delightful series, this stretch of issues are somewhat weak.

The problem is much of the volume deals with Thorn leading Gran’ma Ben, the Bone cousins, and Bartleby the baby rat creature through a devastated valley surrounded by “ghost circles”.  Ghost circles, we are told, are mystical patches that cause an instant death to anyone caught in one, as seen when a stampede of rat creatures follows the group into the valley and don’t know where to step to avoid the ghost circles.  This concept was name-dropped briefly in a previous volume, but that was about all. 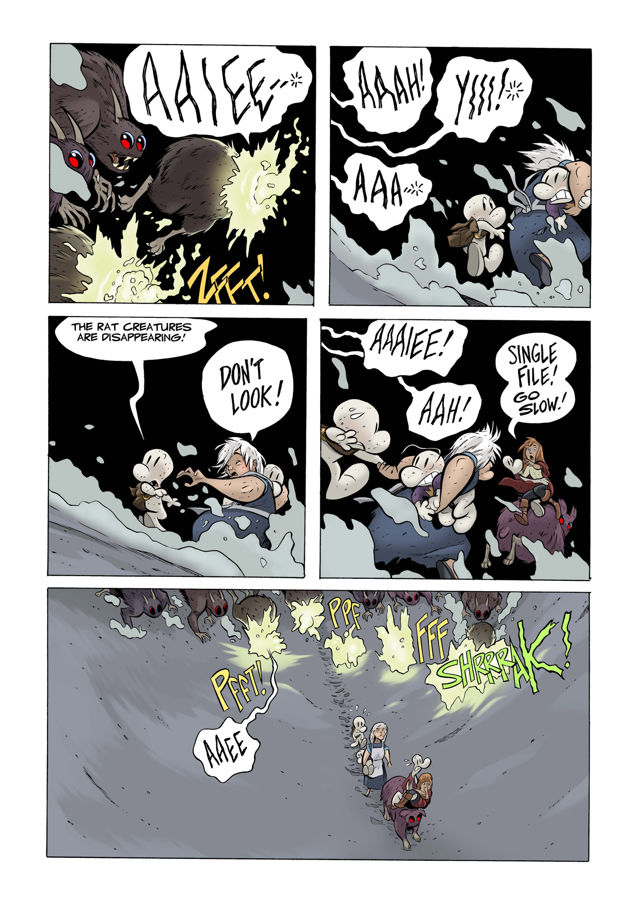 The reason I think this is a problem is that it is really hard for me to get worried about the threat of invisible stuff.  Thorn can lead the group through the ghost circles and they need to step exactly where she does to avoid the nasty fate of falling into one.  Now, Thorn can, with Fone’s help, see into a circle and even enter one and return so long as the two remain holding hands, but comics are among other things a visual medium, and even having fun characters like the Bones tromping through a flattened land of ash doesn’t really work if there isn’t much for the reader to see.

The same is true when the group comes to the dragon burial ground.  We’re told it is an instant death sentence to go through there, but its the only safe path past the ghost circles.  Does anything happen to the group on their way through this area?  Not in the slightest.  Once they cross a rock outcropping acting as a bridge, there isn’t so much of a hint of a dragon on patrol.  The only glimpse we get of a dragon is Fone seeing the Big Red Dragon in his dreams again, this time swallowing him as he’s stuck as Ismael from Moby-Dick again.

Now, that said, this is not to say the volume was a complete waste.  There is some good stuff here.  As mentioned, Thorn can enter a ghost circle if Fone goes with her.  Why?  Fone’s actions saving Thorn in the previous volume means both of them have a tiny piece of the Lord of Locusts in them.  The bad news there is the revived Briar actually can use a Bone for her ritual and keep her power and not lose it to the stronger Thorn, so Thorn is free to die.  Thorn has a bit more of the power, so when the pair enter a ghost circle and see it looks like a human-free version of the pre-destroyed valley, she can hear the victims asking for help while Fone can’t.

There are fine visual treats, like when Fone and Phoney find themselves dressed like the versions of them that appear in Fone’s Moby-Dick dream (and Phoney’s not even a fan).

Lucius gives his backstory to one of the surviving villagers (his poor friend Jonathan dies somewhere off-panel after having a last conversation with Ted the Bug).  Why Briar over Rose?  Briar was more…womanly, Lucius explains.  He was the captain of the royal guard in those days.  We also learn a bit more of Briar’s backstory, like why she uses a scythe (Thorn’s father had used it to cut her in half), and the whole handmaid thing (she felt she was treated like one by her sister Rose).

And Bartleby returns!  After spending enough time with his biological kind, Bartleby, now bigger and talking, decides he doesn’t like it and helps save the cousins.

On a more ominous note, the reader sees Kingdok still lives, without one arm and most of his tongue, trapped underground in the old temple.

At the end of the volume, as Lucius convinces the stick-eaters to leave their sanctuary and take the survivors to the kingdom of Atheia (the monks remove their hoods, a nice symbolic way of showing they have changed their minds about the current situation since that is the first we’ve seen of them without their hoods), and the others are finally free of both the ghost circles and the dragon burial ground, the story is being set for the final confrontation between good and evil.

But first, Phoney decides he’s done with being poor.  The next volume, as a result, is entitled Treasure Hunters.