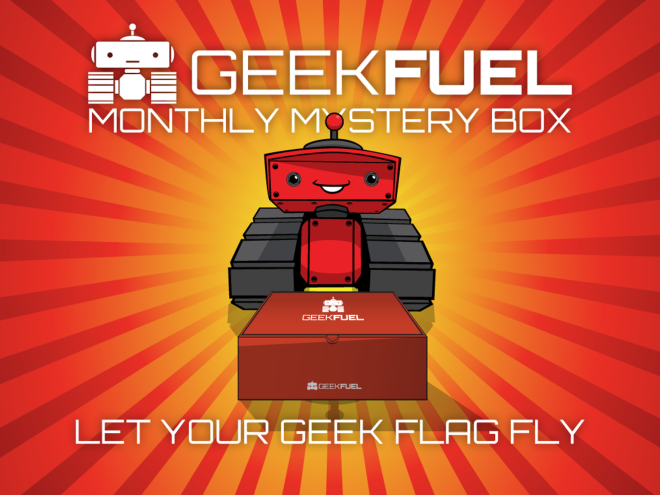 Hello faithful readers! Remember a while back when I posted about the ever growing popularity of Geek Mystery Subscription Boxes and ranked them in order of value? Well thanks to that post, Gabbing Geek was contacted by Geek Fuel and asked to do another review on just their subscription box service. Who says no to a free geek box!? Not this girl! As a disclaimer, I have to mention that I was NOT paid in any way to promote the box. The only thing they asked was if I would review the box given to me for free, and post the review online after I opened it. And folks – that’s exactly what I plan to do. Not only can you read through my thoughts – but there is a video as well! Thus let the review begin… 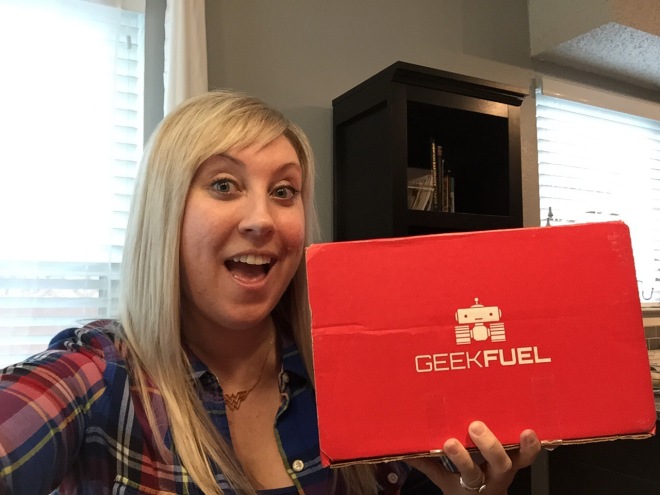 I’m a super excitable person. Truly – I am. So it doesn’t take much for me to think something is Tony The Tiger Grrrrrrrrreeeeeeeaaaaaaat! And by my expression above, you can see I’m already super stoked to open the box. And let me pause there for a moment.

Part of the success of these Geek Mystery Subscription Boxes is the element of surprise. Most of us (excluding my husband) love a good surprise. And most of us (including my husband) love getting packages in the mail. Combine the two experiences, and it  becomes addicting, if not self-prophecizing. You are excited because a surprise came in the mail. It’s not until reality hits you later on whether you really “enjoy” what’s in the box. More to come on that later.

Let me also make the disclaimer that I currently have a subscription to both Loot Crate and Marvel’s Collector Corps. Both of which I have had success with in the past. So because of the success with the other box companies, I’ll admit that the bar is set high for Geek Fuel. Past Geek Fuel boxes look like a lot of fun, and their perceived value over all got them a rank of #4 on my Mystery Geek Box Monthly Subscriptions: The Good, The Bad, and The Geeky post. So let’s take a closer look.

Geek Fuel states that they are a monthly mystery box filled with t-shirts (exclusive for every box), toys, digital games, limited edition collectibles, and all things epic. Monthly plans start at $23.90 (that’s including shipping & handling). And they usually ship out towards the end of the month. This month’s box theme was called “90’s Take Over.” While other past boxes included themes like: Summer Mayhem (May), Team (April), and War (March). 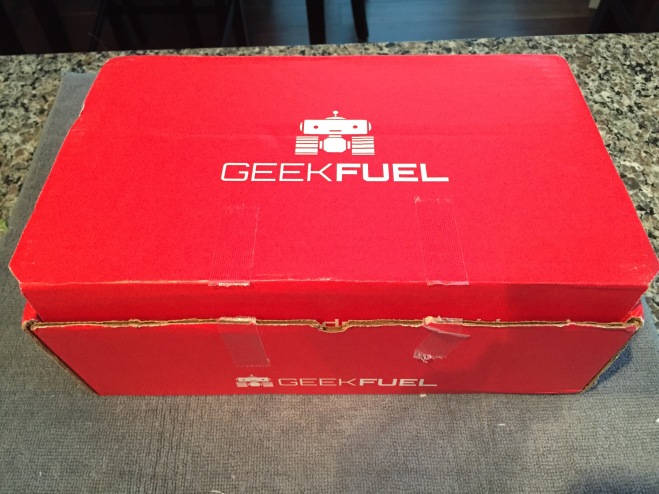 Remember when I said that part of the excitement of getting a Geek Mystery Box is the fact that it comes in the mail, and that everything in it is a surprise? Well this is something that Geek Fuel does really well. Their packaging is super sharp – and it adds to the overall experience and element of surprise. 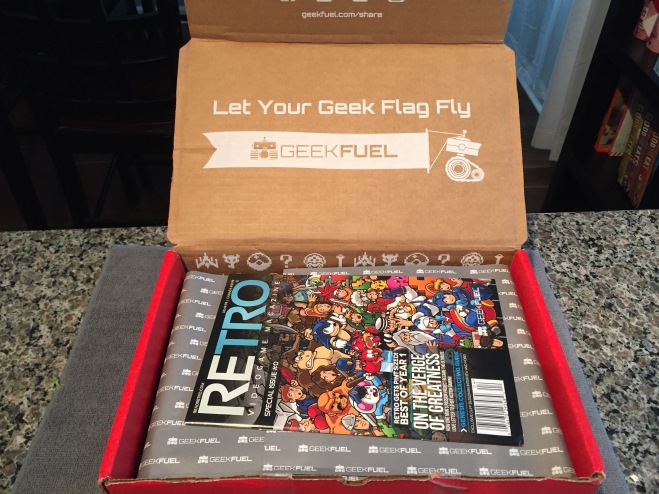 When you first open the box, you are not fully exposed to all the goodies that lie within. You are teased with their bonus material on top – which, this month, happened to be a Retro video game magazine. I had never heard of it before, but it looks like it’s a magazine based on all your favorite Retro mediums. Check out their website for all their back issues and other cool stuff. Value of said magazine: $5.00 per Retro’s website. 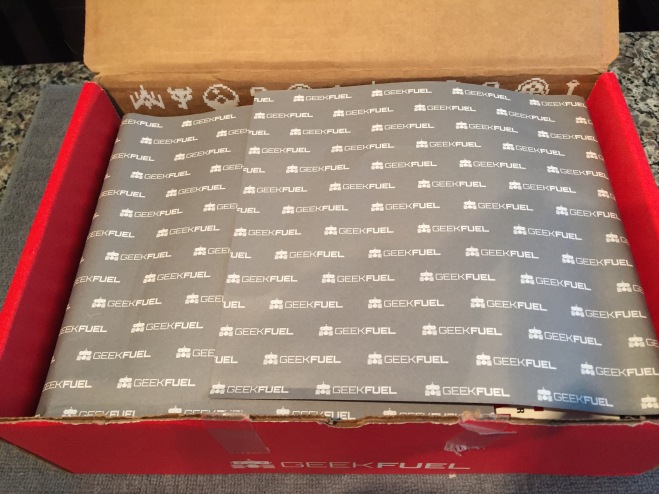 But as you can see – the element of surprise is still hanging on bated breath. And I love that Geek Fuel does this. I think it’s smart to keep the suspense going as long as possible. So now into the goodies. 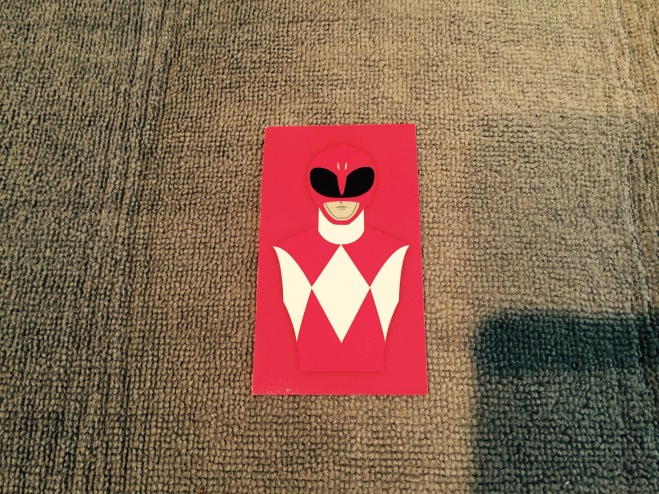 First up is the Pink Power Ranger magnet. Now – don’t get me wrong, I am sure there are plenty of people who love the Power Rangers, I’m just not one of them. But if I was going get any Power Ranger, I am glad it was the girl (even if she is pink). Apparently she has a name: Pterodactyl. Or maybe that’s her character? Who knows – I’m not going to spend hours looking her up. What I’m more interested in, is the value of the magnet. There isn’t anything exactly like it on the interwebs. I found similar items from $3.00 – $6.00. So let’s split the difference and call this a $4.00 magnet. 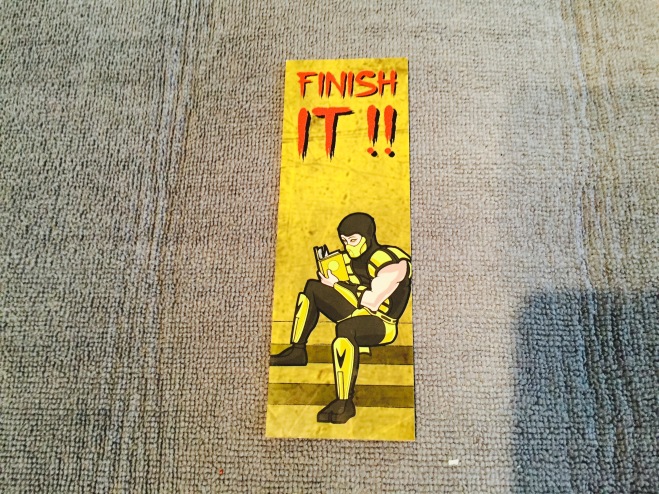 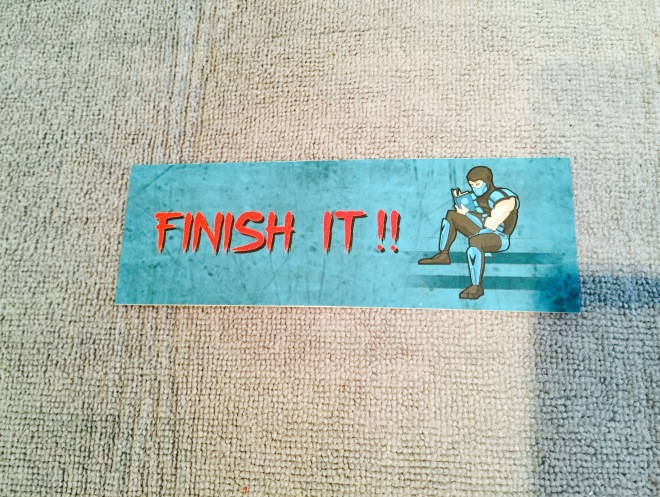 Next in line is a Mortal Kombat bookmark. Which is pretty cool. I love a good bookmark – especially because I read all the time. ALL THE TIME! Seriously, my comic book habit is something of a problem. But I digress. The clever play on words from MK’s famous “FINISH HIM” fatality move is noted by the “FINISH IT” headline. Both Subzero and Scorpion are featured on the bookmark, which is also pretty cool. Again, like the magnet, there is nothing that exactly matches this on the internet, but I did find a really cool vinyl version, and a listing on Ebay that makes me believe that this is worth something between $0.50 – $8.00. But who pays $8.00 for a laminated card stock bookmark? Not me! So let’s just say I’m being generous when I give this a $2.00 value. 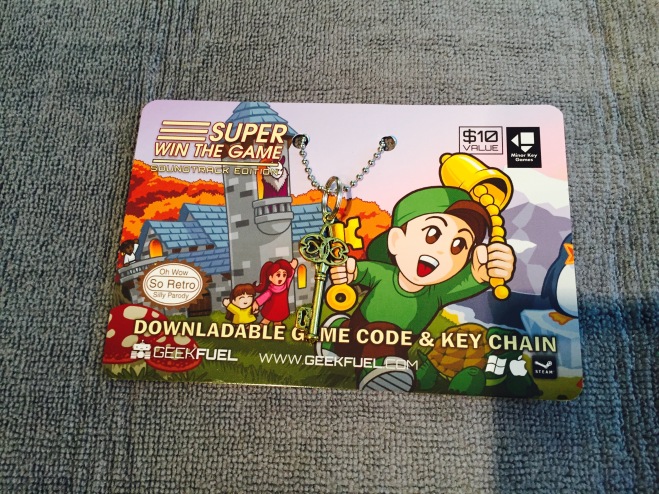 Next up is this cool downloadable game code & key chain. Per Steam, the value of the “Super Win The Game: Soundtrack Edition” is $10.00, so we’re right on the money with this one. And when I went to look the game, and it’s game play – it actually looks pretty adorable. Definitely something I will download (thanks to Geek Fuel) for free and play. 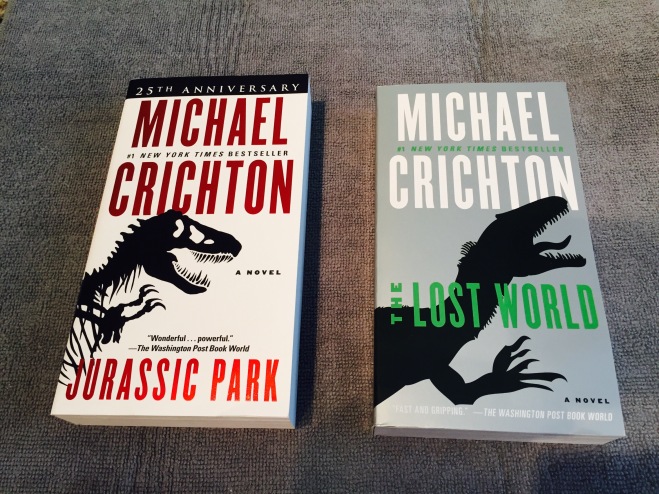 Past the free game we enter the land of the lost. Or in this case, the land of Isla Nebula. Now at first – I was really stoked about seeing these in the box. I mean – two full Michael Crichton novels is nothing to snub. But then I honestly asked myself if I would read them – and the answer is no. BUT JENNY – YOU JUST SAID YOU LOVE TO READ! Yes, you’re right, I do love to read. But because I have already read these books, specifically back in the 90’s, I don’t feel the need to revisit them. Well….maybe The Lost World, since I don’t think I read that. But either way that doesn’t mean it’s not cool. I love having a library in my house, and what Geek Fuel did, was help me add to my library – and for that, I say thank you. Because these books have been out for a while (I mean, this is a retro 90’s theme, right?) the going price on Amazon.com is roughly $5.00 – $7.00 per paperback book. Let’s split the difference and call this $6.00 per book. But, you can’t put a price on chaos theory – AMIRIGHT? 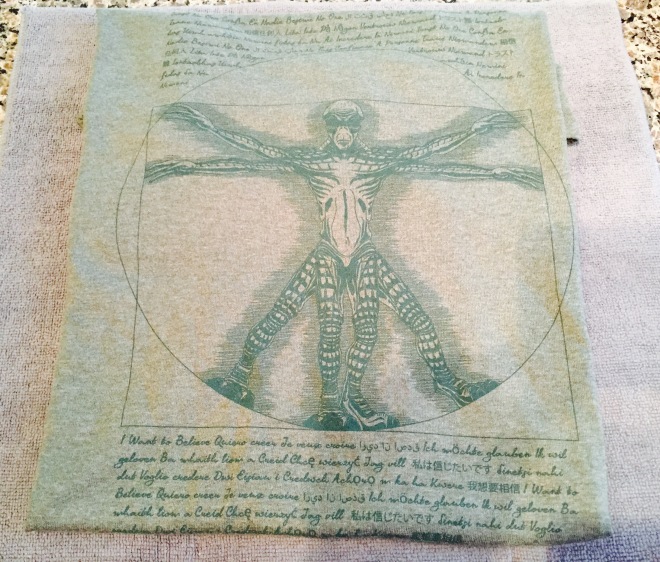 Moving right along, we come upon the exclusive T-Shirt as promised on Geek Fuel’s website. This month the shirt harkens back to the ol’ X-Files days with this Alien green humanoid. Since this shirt is exclusive to Geek Fuel, I had to do a little digging to find something comparable. Zazzle sells the Da Vinci Human Proportions (similar design) for somewhere between $20.00 – $30.00. So for this exclusive, I’ll guesstimate that it’s value is probably around $25.00. Not too shabby for a geeky tee! Now if only the truth was out there…. 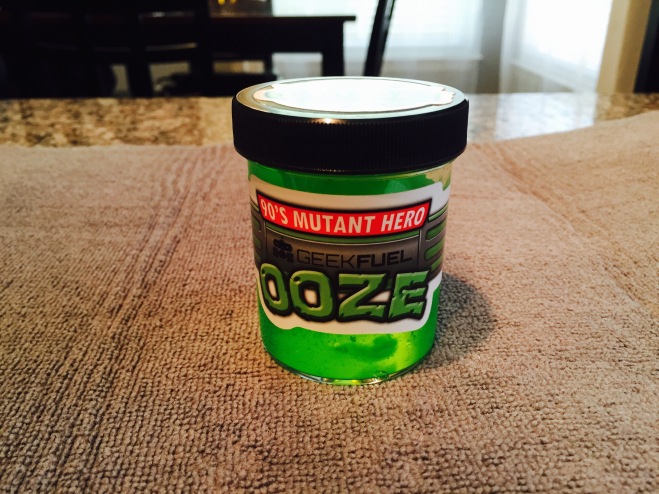 Last but not least, we have the Teenage Mutant Ninja Turtles 90’s style green ooze. Now mind you – they didn’t brand it as TMNT, I added that of my own free will. Because let’s be honest people, this is Turtle ooze and we all know it. I remember when the ooze first came out. Take a look: 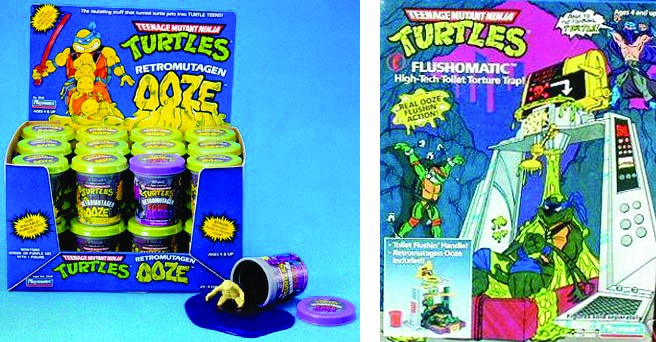 It was packaged in little canisters like the above, and came in different colors. The object was to totally cover your Turtles so they too could enjoy the soft flowing cooling effects of the green/purple slime. Now – whether mom thought that was a good idea, was totally up to you and your family. Let’s just say Jenny’s mom was not a fan. Imagine her surprise when I show her the ooze is back! So fun! Original 90’s ooze is going from $0.99 – $749.00 on Ebay. You read that right…. $749.00. But let’s all assume that there was a reason why Geek Fuel didn’t claim the branding rights to TMNT – and called this: “90’s Mutant Hero Geek Fuel Ooze” – and for that, I’ll give it a $5.00 value for something comparable on Amazon. 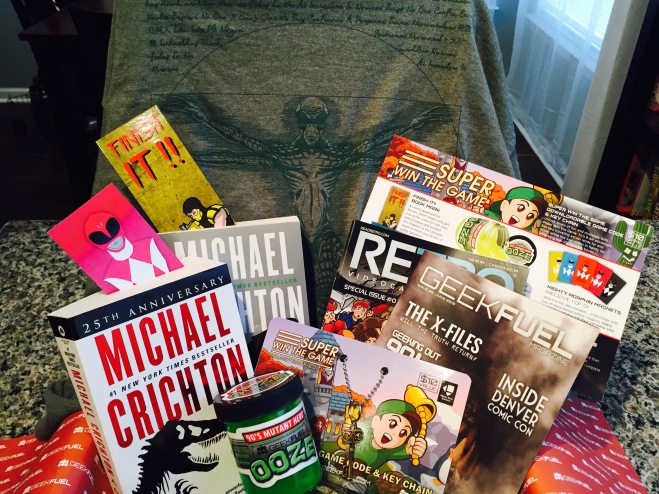 And that sums it up people! Let’s see how Geek Fuel did. Remember, their monthly subscription price is $23.90 (which includes shipping/handling). Adding up the value (perceived value at times) we come up with the below:

WAIT just a moment before we get to excited. Because a $63.00 value is not too shabby! But let’s assume for a moment that I didn’t do any research at all, and guesstimated on the value of what I thought the items were worth, or better yet, what I’d be willing to pay for them. Check out “Jenny’s Perceived Value” below:

Still not too shabby! That means either way you look at it, perceived value, or actual value, you’re still getting more inside the box than what you paid for the subscription. I’d call that a win-win! So nice job Geek Fuel! That was super fun to experience, and I thank you for your willingness to let us try you out!

For those of you that would like to also try Geek Fuel – use this awesome link, and tell them that we sent you! Anyone that signs up with this link will receive a free bonus item. Http://www.geekfuel.com/gabbinggeek

And just for shits and giggles, Geek Fuel also gives away a free box each month as well – there is always a contest live at www.geekfuel.com/contest.  You should totally check that out – but beware, I may beat you to it!

And for those of you that want to see the Unboxing live – check out our video below. Enjoy!