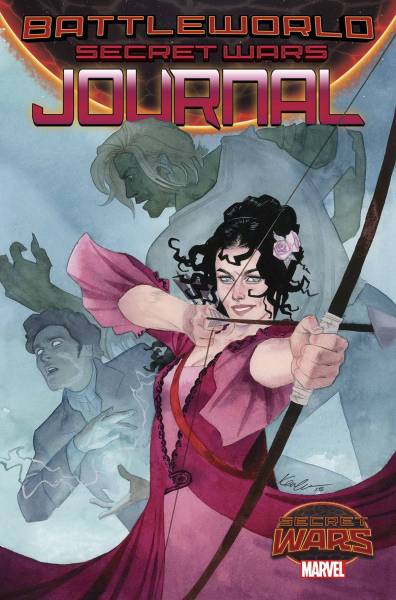 What.  The.  (Editor’s Note: “Don’t do it.”)  Fudge.  But I don’t want to say “Fudge.” I want to say THE word, the big one, the queen-mother of dirty words, the “F-dash-dash-dash” word!  The first story this issue is horrible.  I’m not even sure what is going on.  It’s the 1602 domain, there’s some female, archer Robin Hood type.  Punisher is the Sheriff.  And the whole thing just turns into a commercial for upcoming book Siege.

Story two is a bit better.  It’s the domain of Egyptia and some familiar looking X-Men types are planning to rise up and kill the ruler of their domain: Khonshu.

Another in a seemingly endless pile of Wolverine’s on Battleworld has found a man that can get them close to Khonshu.  Marc Spector, a former member of Khonshu’s guards known as the Moon Knights.

But as these stories tend to do (and quickly, we only got half a book to work with here) things go bad in a hurry.  You see, the mutants are out past curfew, which they see as oppression…but it is really to protect them from Spector and others of his ilk that turn at night into Man-Wolf’s.

After a bloody battle Khonshu herself arrives and turns the rebellious X-Men into Man-Wolf’s as well.  Sending them out on a new mission, to return to their homes and kill the rest of the rebel uprising.

One of the other opportunities these anthology books afford Marvel is the ability to have stories for characters that have difficulty holding their own with their own book.  For example, who’d be rushing out to buy a Misty Knight/Paladin book?  Easier to cram their short story here in issue two.

In the Killville domain, Misty and Paladin stop a thief in possession of “Kraven’s coin”.  Word on the street is that whoever brings the coin to Kraven will get a fortune.  Unfortunately when you have something this valuable, everyone is after it.  Including slightly odd versions of Rhino, Tarantula, Vulture and more of mostly Spider-Man’s rouges gallery.

When Misty finally gets the coin to an overweight Kraven who doesn’t look like he’s hunted anything besides Big Mac’s, she learns that the hunt was never about money.  It was all just a ploy by Kraven to keep the assassins busy.  If they were hunting for the coin they wouldn’t be hunting for him.  Kraven tries to hire Misty to run his “fake hunt”, but she decides to split and take his petty cash instead.

Story two is worth buying this issue for.  In the domain run by Mr. Sinister we find a couple of distorted versions of popular hero’s in a story called, “Hell’s Kitchen”.  You can guess the first hero is Matt Murdock.  He is blind and wears a mask like his Netflix version, but he is not a hero, he is Sinister’s cook.  (And the title joke pays off.)  He is supposedly the greatest cook in all the lands, known as the…Fare-Devil.

But like his love Collektra (a mute, twisted version of Elektra that hunts monsters to bring back for Matt to cook), they are slaves to Sinister.  Matt has a plan to poison Sinsister and free himself and Collektra.  But things don’t work out as expected.  I won’t spoil the ending as it features a nice twist and is definitely worth your time to read. 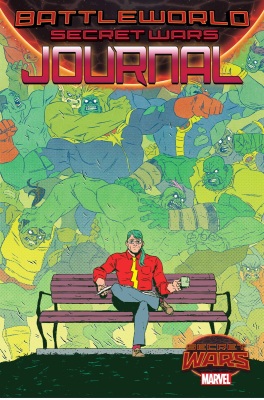 One of the problems with these short story anthology books is that sometimes when a story clicks, they can feel rushed since there is only 10 pages dedicated to them.  Case in point is the story “Who Killed Tony Stark?”

Taking place in Old Town (which I’m having trouble finding on the Battleworld map) this short “Whodunnit?” mostly features another Wolverine as a noir cop/private investigator.  He is eventually joined by The Punisher, who in this case is Frank Castle Jr and wears a mask painted with the famous skull, not emblazoned on his chest.

I won’t spoil the mystery here, but I was disappointed that it all wrapped very quickly and in a nice little bow on page ten since they ran out of space.  This was definitely a story that could have been flushed out, at minimum to a full issue.

Story two is a more lighthearted and fun.  Doc Samson plays an anger management therapist near Greenland…the domain made up entirely of Hulks.  Needless to say, business is booming.  Unfortunately, with Hulks everywhere, the domain is destroying it’s people and itself when the smallest of things set someone off into a Hulk rampage.

Doc has lost faith that there are any hope for the Hulks until he meets a new client.  A young boy named Peter Parker.  As per the familiar Parker origin, Uncle Ben has been killed, but Peter has not been turned into Spider-Man, instead he is a Hulk like everyone else.

As per normal in these sessions, Peter “Hulk’s out” over Doc Samson’s insistence on Peter revealing his last words to his Uncle before his death.  Samson manages to calm Peter down and when he returns to human form, they have a conversation about (can you guess what?) power and responsibility.

The once reluctant Peter appears to buy into Samson’s advice and agrees to continue the therapy sessions.  This makes Samson more optimistic that maybe the Hulks are savable after all.