The growth of the direct market, where comics publishers could send their wares to specialty comic book stores as opposed to newsstands, meant that new publishers could have a shot at becoming something.  One such publisher was First Comics, which originally published comics from 1983-1991.  First revived Classics Illustrated and reprinted some Japanese manga comics in English, but they also did some original work with creator-owned characters that were free of the Comics Code, and as a result, were free to offer more mature content to their readers.

One of those was original, creator-owned characters was John Ostrander and Tim Truman’s John Gaunt, also known as the mercenary Grimjack.

John “Grimjack” Gaunt worked out of Munden’s Bar in the pan-dimensional city of Cynosure.  Cynosure was a giant city that was a nexus point for many different realities.  This was a city where the laws of physics could change just be crossing a street, where magic would work in some places and technology in others, and sometimes really, really weird stuff would happen.  Outside the city appeared to be mostly desert wasteland, but inside the city anything could happen.  The city government, such as it was, was mostly concerned with keeping trade going between dimensions and districts and left everyone to fend for themselves.

The result of that was that many people would turn to John Gaunt for help if they could find and afford him.

Gaunt was a typical loner hero in many ways.  He was born a middle child to a father who had children by two different women, and the handful of relatives John cared for tended to die or disappear in mysterious circumstances.  Before he was even grown, John’s drunken father had killed John’s uncle, maybe killed his stepmother, and died himself after giving John a facial scar that became a Grimjack trademark.  Now homeless with his three brothers, only one of whom he actually liked, John eventually was thrown into a gladiatorial pit and made to fight for his life.  He made one lifelong friend there, another kid fighter named Blackjacmac, and became the second most popular fighter in the pit, after only the flashier killer known as The Dancer.

Eventually escaping the Pit, John became a mercenary, a cop, and finally private gun for hire.  He settled in Munden’s Bar, about as far down as you can get in Cynosure, and took cases.  He knew some magic, fought in the Demon Wars, and lived a hard, lonely life.

In many ways, Grimjack doesn’t sound too different from a lot of other anti-heroes, and indeed he does hit many of the cliches of that sort of character, like accusations that he only cares for himself, often untrue but coming from people who expect more from him than he is able to do.  What really makes Grimjack stand out is the setting.  Since anything can and will happen in Cynosure, Grimjack often finds himself dealing with all kinds of issues and genre conventions, where his own skills and knowledge of just how to survive have a great advantage.

It helped that Grimjack’s adventures were written by John Ostrander, working with future Hawkworld collaborator Tim Truman at first, and then future Spectre collaborator Tom Mandrake down the road, among others.  Ostrander has a good mind for continuity in many ways, and can grow a character well when given the opportunity.  The setting alone for Grimjack allowed Ostrander to experiment with a wide variety of settings.  The first storyarc had John hired by a newly created vampire who wanted to eliminate the person who bit him before he took his own life.  The next had John and Blackjacmac assisting a cartoon world of talking cartoon animals fending off another, more hostile world of talking cartoon animals.  John faced robots that wore the skins of human victims, demons, and wild west outlaws.  The outskirts of the city led to Mad Max style adventures.  He fought off rebellions and a man he didn’t know was his own son.  He even went to Hell at one point, and bowling against some gods ar another.  The closest he had to a love interest was a ghost and Blackjac’s girlfriend was a literal goddess named Goddess. 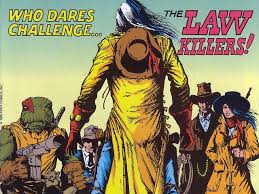 I was lucky enough to get the original Grimjack series in trade form, though apparently my reading is incomplete.  John eventually died and was reincarnated as a rich teenager (!) who eventually went back to Munden’s when he regained his memories.  A back-up feature, “Munden’s Bar,” had all manner of characters, including a certain bunch of Ninja Turtles, make guest shots before they were replaced by a feature detailing Gaunt’s awful childhood.

Even with that in mind, I actually felt upon finishing the last of the John Gaunt issues that I had a complete reading of Grimjack’s life.  I didn’t need more and never sought it out.  Sometimes a Misplaced Hero is misplaced due to bad editorial decisions or poor sales, but sometimes the character has a complete story and revisiting is rarely an option.  Fans were fortunate that IDW worked with Ostrander and Truman, after the pair had resecured the rights to the character, to produce a fun prequel series.  The biggest problem for Grimjack wasn’t the character itself but the setting.  While Ostrander owned Grimjack, he didn’t own Cynosure.  That was the intellectual property of First Comics, and when they went under, Grimjack’s setting went with it.  Now that those rights have been sorted out, perhaps more Grimjack will appear someday.  Only time will tell.