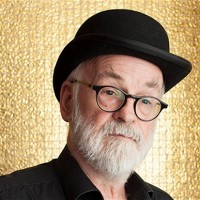 Tom is on vacation this week, so we are taking a break from our DC Animated Universe rewatch.

If you’ve been following along on our rewatch (and really, why wouldn’t you be?) you’ve noticed that one of the things I constantly bring up is the lack of origin story appearing in Batman: The Animated Series.  According to the writer’s bible for the show, this was intentional.

The bible is an interesting read, particularly the one of the first passages about Batman’s origin: 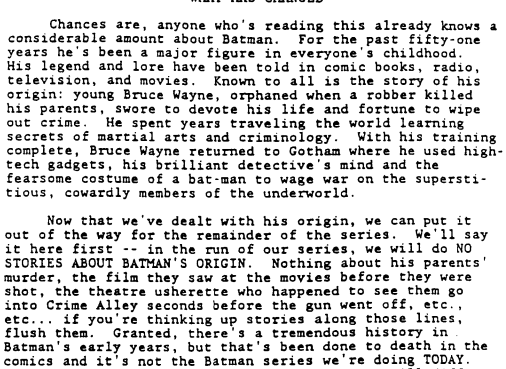 It makes sense.  How many people watching an animated Batman series are not familiar with his origin?  They took the same approach with the show’s opening.  Have you ever noticed that the show never has a title or anything that says it is “Batman: The Animated Series”?  There’s just Batman, doing Batman things and you know instantly what the show is.

Do we need another scene that has been done to (excuse the pun) death, as evidenced by this video supercut of the numerous times we’ve seen poor old Martha and Thomas Wayne get murdered.

They do deviate from the bible at times.  For example, there is a passage that says: “Batman does not work directly with the police.  There is no Bat-Signal or hotline.”  In one of the last episodes Tom and I watched, the Bat-Signal made it’s first appearance.

So come back (mostly) each week as Tom and I will continue to watch cartoons and give insightful and thought provoking analysis.