First Impressions is a column where we review comic books that meet two criteria: they must be Comixology Submit titles (self-published digital books) and they must be a first issue.  The comic book genre is a treasure trove of creativity even outside established publishers–you owe it to yourself to check out some of these gems.  This time we’re reviewing Gears & Bones. 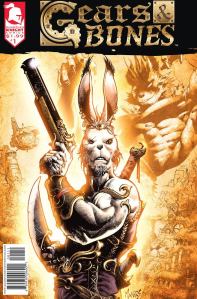 If I had a nickel for every time I reviewed a swashbuckling tale of a pirate bunny kicking high fantasy creature tail as a test for a greater mission to kill his father the king, I would now have one nickel.  That’s the concept of Gears & Bones and it delivers on exactly that.  Written by Andrew Anderson and William Thomas, this first issue is brought to spectacular life by Osvaldo Montpeller.  The art is what truly shines in this first issue with stunning inks by Montpeller and gorgeous colors by the team of Tony Galvan and Wes Hartman (and great letters by Joshua Cozine, whose work I actually recognized as I read because he lettered my own book Fallen).

I’m more of a science fiction fan than fantasy and I find it particularly difficult to get into high fantasy.  This book made that a bit more complicated with all the different species and I felt like I was missing something throughout, but the art kept me going with its stunning details and tone.

Montpeller’s artwork makes the book worth picking up.  The story can be a bit hard to follow as to which creature is on which side, but I can’t tell if that’s the fantasy part making it difficult or the animal part.  But there’s something oddly intriguing about an angry, swashbuckling bunny.

If you are a fan of revenge tales (or tails) filled with fantasy political intrigue and a fair amount of action with artwork seen above, then pick up this title and brace yourself for a wild ride.  Let’s find out just how angry this fluffy little cottontail can get.