As I’ve made my way through reading all the Secret Wars tie-ins, some titles naturally gravitated to the bottom of my “to read” pile for some reason or another.  Upon agreeing to work on the Power Rankings, I had to catch up on those “bottom of the pile” reads, and quick.  Some turned out to be true gems (Mrs. Deadpool and the Howling Commandos, Inhumans: Attilan Rising) while others turned out to be better than expected (M.O.D.O.K. Assassin, Master Of Kung-Fu).  (Where Monsters Dwell was in that list too.  While not a true gem, it is definitely better than expected and in the second tier of titles in the rankings.)

One of those titles has come to completion, and after the break we will look at the drunken adventures of Shang-Chi, the Master Of Kung-Fu.

In the domain of K’un-Lun, the only thing Shang-Chi is a master of these days is avoiding being sober.  But when the Emperor’s guards attempt to get him to move along as they clear the park of vagrants and drunks, Shang-Chi shows that he can still fight and disposes of the three guards with relative ease.  All while still incredibly drunk.

Someone, anyone, standing up to the rule of Emperor Zu causes quite a stir in the crowd that has gathered to watch.  Among them, a very bald and unrecognizable Kitty Pryde who is trapped in her “phased” form and cannot make contact with anyone or anything.  But her eyes work perfectly fine, as do her legs and mouth as she runs to tell fellow outcast Callisto about the rebel.

The guards did not recognize Shang-Chi at first, but as he wiped the floor with them, he revealed his identity and we learn that he is wanted for murdering Lord Tuan, great master of the Iron Fist clan.

Shang-Chi goes into hiding once again with the help of Callisto and her crew of outcasts.  But word of his return quickly gets out and Emperor Zu does exactly what you’d expect any father to do…order his highest ranked assassins to kill his son. 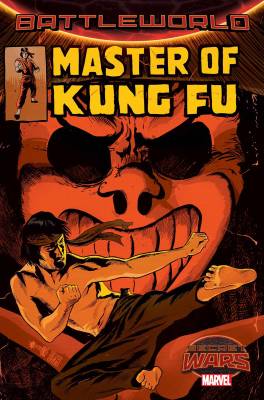 In the tunnels below K’un-Lun, Shang-Chi spares with Callisto’s outcasts.  He doesn’t break a sweat, nor spill a drop of his alcohol that he routinely sips on while dispatching them.  When the lopsided fighting concludes, Callisto asks Shang-Chi to teach them the secrets of the Ten Rings, Zheng Zu’s ten legendary techniques.  Shang-Chi refuses and tells them that they are all better off staying in the tunnels and staying away from his father.

Shang-Chi then goes to find somewhere to sleep one off.  While he is passed out, Callisto sells him out to his father, revealing his location in exchange for acceptance into his clan.

Zu’s assassins, including Iron Fist are dispatched to the tunnels to retrieve Shang-Chi.  After one of the outcasts are murdered Shang-Chi helps the others escape by using one of the Ten Rings techniques and shrouding them in darkness.

Shang-Chi comes to the realization that he must stop running and confront his father.  The only way to do this would be to enter the Thirteen Chambers tournament and defeat his father for rule of K’un-Lun.  But to enter, he must be a master.  To be a master, he must have a school.  And the school must have students.  At long last (about 12 pages) he agrees to teach the outcasts.

Each of these books open with a history lesson of the domain of K’un-Lun.  Stories of the different clans, their masters, and the tournament of the Thirteen Chambers which decides their ruler.  In this installment we learn that Lord Tuan of the Iron Fist clan, though he could never defeat Zheng Zu in the tournament, always pushed him to the brink and showed he was vulnerable.  We also learn that Zheng Zu, tired of feeling humiliated by Lord Tuan, ordered his son Shang-Chi to kill Lord Tuan…and Shang-chi complied.

It is time once again for the Thirteen Chambers to open and the masters of clans from across the land have gathered to compete to become Emperor.  Including Shang-Chi.  Now master of a school called The Lower Caste.  Iron Fist protests that a murderer such as Shang-Chi should not be allowed to enter, but Zheng Zu must allow it as per tradition.

The tournament begins.  Zheng Zu is no fool.  As he must only face whoever makes it to the Thirteenth Chamber, he pits all of the toughest opponents against each other to wear them down.  Up first, Shang-Chi must fight Namor in a room filling with water.  Namor seems to have an advantage as he has taught himself to breath underwater.  But even he can’t breath when Shang-Chi uses the technique known as The Mortal Blade to puncture both of Namor’s lungs.

Shang-Chi then fights his way through the remaining chambers against variations of popular Marvel heroes that include Psylocke, Moon Knight and Black Panther.  Shang-Chi emerges victorious against each, but he takes a beating in the process.  Severely injured and unable to focus he reaches a chamber to face the Iron Fist.

In most domains, Shang-Chi and Iron Fist would be allies and great friends.  But in this domain their paths have diverged and Iron Fist wants revenge against Shang-Chi for murdering his master Lord Tuan.

But Iron Fist does not fight alone.  His partner Red Sai fights against  Shang-Chi as well, and manages to cut Shang-Chi with her sai.  A poison tipped sai.  As Shang-Chi lies dying, Red Sai (this domain’s version of Elektra) confesses that Zheng Zu actually sent her to kill Lord Tuan, but he defeated her.  Zheng Zu then promised to kill her and her students and burn her school to the ground if Shang-Chi didn’t do what she could not.  Which Shang-Chi did, sacrificing his honor to save her.

While Iron Fist is still upset at Shang-Chi, he knows now that the real blame lies with Zheng Zu.  Using the power of the Iron Fist, he burns the poison out of Shang-Chi’s system.  Shang Chi then moves on to face his father in the final chamber.

It’s difficult to defeat someone that has taught you everything you know.  And when that someone has only taught you nine of the ten rings techniques, you would appear to be at a disadvantage.  Until you reveal that you have learned a few moves of your own.  Like the ability to become a ghost like your prize student Kitty Pryde.  It also helps when during your exile you discover that there are actually Eleven Rings and you can now turn your father to stone and become emperor.