In every generation there is a Chosen One. I alone will stand against the vampires, the demons, and the forces of  Netflix.  I am the slayer! And these are my chronicles while watching Buffy The Vampire Slayer for the first time…. as a 35 year old woman. That’s right – I am a Buffy virgin.

Today we will be talking about Season 3, Episode 10. If you’re (re)watching with me, or even if you’re not, tell me what you thought about this episode in the comments!

For past posts, please reference my Handy-Dandy-Xandy-Guide.

I’m not going to lie Buffy fans. I watched this episode a long time ago and have been sitting on it, waiting to figure out how I wanted to digest it’s meaning. It’s like that old turkey in my fridge. I love it – I want to eat it, but I just can’t bring myself to make a sandwich with it because – it’s a little stale. Not that it wasn’t perfectly good turkey when I bought it, but now, it’s just been sitting there for weeks, getting more and more stale. And I’m sure I’d be fine if I’d just eat it, but who wants to take the chances with old stale turkey?

So I’m not eating it.

Wait – what are we talking about? Turkey or Buffy?

Seriously – Amends has been one of those episodes I just sat on forever because I didn’t know if I loved it – or hated it.

I had a very long post written out about Angel this, and Buffy that – and ultimately none of it mattered. You know why? Because this episode ends with snow fixing everything.

That’s right – I said snow. That cold wet stuff that apparently comes to the North East and Canada. To me, snow is a myth, like an ice sculpted Griffon. Living in the south my whole life, snow is something we see on TV and think “Oh wouldn’t that be nice?”

But in this episode of Buffy, snow is the main plot point that takes Angel from wanting to die, to everything is perfectly fine. I love fine. Fine is good. It’s just weird. I also love snow (or the idea of snow). I actually DO think it’s magical.  But common sense tells me that it doesn’t fix wanting to die. Or maybe it does. I don’t know – again… I live in the South. Everything is hot as hell in the South. We’re already dying down here.

So to bring you up to speed, here is how the episode went. This will be my shortest synopsis to date:

Deck the halls with bows of holly – fa la la la la, la..la..la..la! Oh look – snow. Now everything in the world can be at peace.

Peace. PEACE. Bah….don’t people in the North actually hate snow? Maybe not a first, I’ve heard that at the beginning of the season it’s wonderful and beautiful and magical. But then when it keeps coming, and piling up on the streets, and eventually takes over the lives of every Northern state in America – people get pissed. And eventually you get a black ball of death living in the middle of your city.

Right Boston? Can I get an amen ?

That looks like trash – but nope. It’s snow. 75 feet of piled up snow.

Cut to Buffy and Angel walking down town in the middle of the street in a storm – and everything is covered in what looks to be a foot of snow. I cannot see their feet. That is my logic.

Yeah – yeah – snow is magical, even if it’s fake cotton snow. But let’s get back to Angel, because truly, this whole episode is about him and how he is a glass case of emotions!

The truth of the matter is that Angel comes to grips (with the help of some demons) with the fact that his life was (and never will be) normal. He’s a vampire for crying out loud! The horrible fact about his life is that he is in danger of blowing up the planet if he ever has a moment of ecstasy. He knows that there is no chance to ever get married or have a family again (that ship sailed a long time ago, Bub). And he is tired of hiding from the world at large.

When you look at it from Angel’s point of view – it’s actually a very sad story. Vampire or not, I’m sure all of us have felt like this before. Who are my reals friends? Is my family sane? Do I like my life? The questions are normal, but if the answers we give ourselves don’t match our perceived expectations, then…. then….. well – we get sad.

We lie awake in bed wondering, what the hell happened to me?

And in a world where problems, heartache, and pain are very real; I think it’s very important to talk through ways of figuring out how to cope. This is not to say that life issues wash away with a small chat, but at least we can be real and say it’s okay, we’re not alone, we all feel this way, and we’ll get through it together.

But instead Joss Whedon gave us magical snow.

I’ll say it again, it was a cheap ending. As much as Buffy and Angel at the end of the episode were trying to talk it out – ultimately they never got a chance to discuss the meat of Angel’s issues. Actually, Angel ended up pushing Buffy to the ground in a fit of rage….and then – BOOM! Snow.

And without a word, they look at the snow, look at each other, and then walk away hand in hand. And that is how the episode ends. 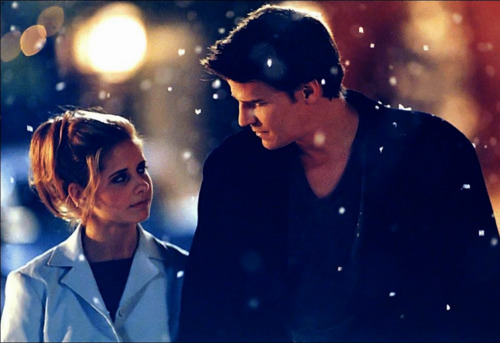 Maybe it’s just me – maybe it’s because I see friends and family deal with depression and a sense of helplessness all the time, that when someone (like Joss Whedon) is telling a story and has a platform for helping people in a positive way, and then takes the easy way out – I get a little mad. Actually – I’m more disappointed.

Maybe the 90’s weren’t like today, where we were openly talking about getting help. Were we talking about how we’re all a little screwed up? Did TV at the time tackle big issues? I honestly cannot remember. I was too busy being a kid. And I don’t mean that to sound insensitive, I meant that to sound like I was completely oblivious. Because I was.

So, what did you think of this episode? Should we have expected a different ending? Or did you like the silent meaning of soft falling snow? Let me know in the comments!

Until next time – keep on slaying Buffy fans!