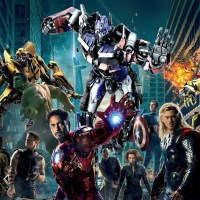 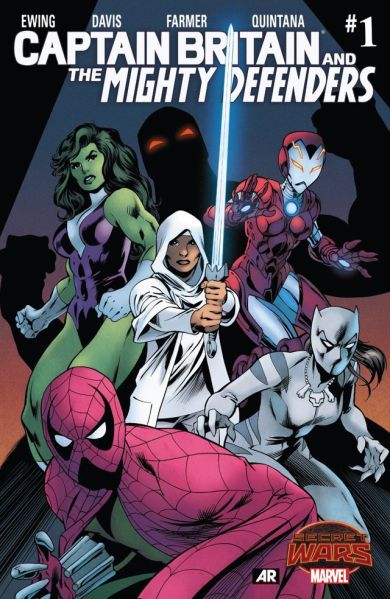 I’ve gotten into the habit of grouping what issues I review in themes or complete series.  But sometimes you just have to get stuff off your plate.

After the break I will take a spoiler filled look at X-Tinction Agenda #2, X-Tinction Agenda #3, Squadron Sinister #2, Squadron Sinister #3, Captain Britain And The Mighty Defenders #1 and Captain Britain And The Mighty Defenders #2.  Those last two actually constitute a complete series.  One of the most polarizing series of the Secret Wars event.

Captain Britain And The Mighty Defenders #1

Most of us are pretty familiar with Iron Man’s origin.  Tony Stark, taken prisoner and trapped in a cave, builds a suit of armor to escape and keep shrapnel from entering his heart.  He is helped by fellow prisoner Dr. Ho Yinsen, who eventually sacrifices himself so that Tony can escape.  But what if roles were reversed and it was Dr. Yinsen that escaped with the armor after Tony sacrificed himself?  That is the underlying tangent from the core Marvel universe that defines the Yinsen City zone of Battleworld.

I believe this was the first book that introduced something of a common theme of people remembering a pre-Battleworld existence.  In this case, the citizens of Yinsen City are seeing it in their dreams.

Meanwhile at the border between Yinsen City and The Warzone (where Civil War takes place), Dr. Fazia Hussain has strolled up to the wall.  With one blow of her mighty sword Excalibur she manages to blast a hole in the wall and walks on in.  She introduces herself as Captain Britain, though noone knows where “Britain” is (including Fazia).  She too is having dreams of a world before Battleworld.  She also informs them that Doom is not God, just a man with power.  Which is like one of the biggest no-no’s on Battleworld.

The heroes of Yinsen City, including Dr. Yinsen in a version of the Iron Man armor and She-Hulk, who is the Thor of this domain are having their own doubts about Doom because of their dreams, so they decide to allow Fazia to stay instead of reporting her to Doom and seeing her exiled to The Shield.

However, Doom has different ideas.  He’s been listening in through Dr. Yinsen’s armor and has heard what they are planning.  (This doesn’t exactly speak to Doom’s Godliness…why would God need some means to eavesdrop on anyone?)  As punishment for their defiance of his laws, he allows the neighboring Mondo City to attack.  In the ensuing melee, Yinsen is killed and Captain Britain is taken prisoner.

Captain Britain And The Mighty Defenders #2 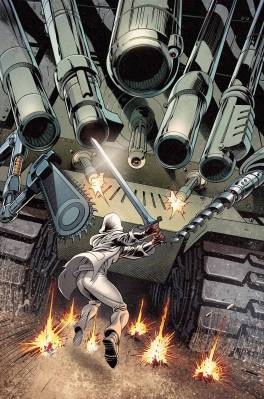 I mentioned off the hop that this series (all two issues of it) were polarizing.  The problem being that issue one was quite excellent.  One of the best single issues up to that point in time.  However the second, was one of the worst issues of the event.  We’ll get into what happens below, but let’s just say it was a major disappointment after what could have been a fantastic series.

Tom tells me that Mondo City is an homage to Mega-City One from Judge Dredd.  Having never read any Judge Dredd I will have to take his word for it.  It is a domain that is very strict on Doom’s rules and whose Baron and Thor is Maria Hill.

Here’s something disappointing, the battle between Mondo and Yinsen Cities occurs off panel.  Mondo City has won and are rounding up everyone into prison camps.  She-Hulk says they surrendered to stop a war that would have killed innocents, but she has a plan.  And that plan is to attack the guards and then bring down the protective walls that are actually keeping all the prisoners safe.  Um hmm.  And for a group of heroes that surrendered 2 minutes into the invasion, they make ultra short work of their captures and are free after another 2 minutes.  No wonder this series is only 2 issues.

Over in Mondo City, Captain Britain is being held captive and tortured…for about 2 minutes before she manages to escape.  One obstacle remains, Baron Thor Hill.  After about 2 minutes of talking and one swing of Excalibur and Thor’s hammer the two decide, “Let’s just be friends and merge our cities together!”

And as it turns out, this was all just an experiment from Doom.  He wanted them to come together…and will allow them to remain rebels, hoping that other rebels will flock to this new city for “something to do” instead of challenging Doom.

And in the end, the whole “we remember pre-Battleworld” angle is mostly irrelevant accept for the heroes using their memories to sew a new British flag in like 2 minutes for Fazia to wave around for some reason. 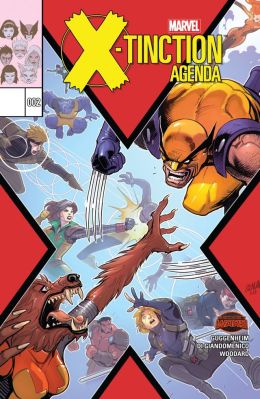 The Genosha attack on X-City continues.  It’s X-Man vs X-Man as Havok and his team take it to Rachel Summers and her team.  While Rachel thinks they are attacking as some retribution for X-City not helping them fight the epidemic back in Genosha, Havok has other plans.  Namely to kidnap the mutant healer Triage and bring him back to Genosha.

Havok’s team is successful in retrieving Triage (as well as taking a few other prisoners including Logan).  When they are back in Genosha, Dr. Alous Kluge has Triage taken to his lab.  While the others believe Kluge is using Triage to create a cure for the mutant virus, he is actually using him to resurrect original recipe X-Tinction Agenda‘s fallen villain Cameron Hodge.

Back in X-City, Rachel is recruiting a team willing to allow themselves to be exposed to the virus in Genosha and rescue their comrades. 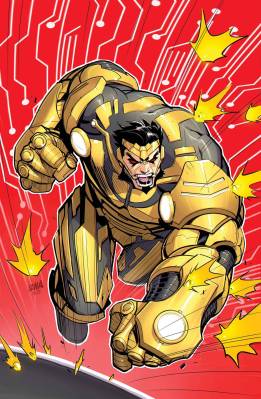 Well…thanks to the regenerative powers of the mutant Triage, his disembodied head is back anyway.  The issue is mostly an X-Man on X-Man brawl again as Rachel Summers and her team have come gently a-knocking, looking for their captured friends.

During the course of the battle they discover that it was Alous Kluge who created the virus that ravages the domain in an attempt to rid it of mutants.  By the end of the issue he also has a new weapon to eradicate mutants…a completely rebuilt Hodge. 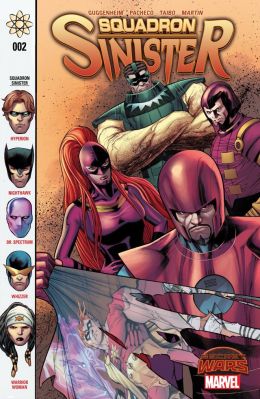 During a night patroling the domiain of Utopolis, Batman tells Flash…I mean…Nighthawk tells Whizzer of his plan to overthrow Hyperion.  Whizzer ask why he should get involved, he’s got it good with Hyperion.  Nighthawk says that Whizzer will do as he asks since they may be afraid of Hyperion but Whizzer is more afraid of Nighthawk.

Later the Squadron reassembles to have a conversation with the Frightful Four.  Hyperion’s sources say the Four are looking to make a move to annex the neighboring province of Europix.  The message from the Squad to the Four is clear, leave Europix alone or the Squad will kill you and all your families.

That night Warrior Woman gets sloppy when she meets with her contact from Nutopia and Nighthawk adds another piece to his puzzle, discovering that she is working to take Hyperion down from the inside.

The following day Nighthawk continues to try to convince Hyperion to give him the potential Thor killing Argonite Weapon for analysis.  Their negotiations are broken up by news of the failure of their last “negotiations”: the Frightful Four have gone ahead and attacked Europix.

The Squad arrive in Europix and make short work of the FF and annex the province for themselves.  They also capture FF member Paste Pot Pete.

While the SS were dealing with the FF, someone broke into their headquarters and stole the Argonite Weapon.  All signs point to FF member Sandman.  Nighthawk says he will torture PPP to get the information about where they took the weapon.  As usual with Nighthawk, nothing is as it seems.  He informs Pete that he already knows who took the weapon, but he will torture Pete so that he tell the Squad what Nighthawk wants him to tell them.  That and that he enjoys torturing people.

When he’s done with PPP, Nighthawk corners Warrior Woman and informs her that he knows she is working with the Nutopians and that he has plans for her. 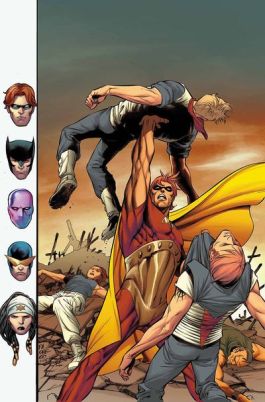 As it turns out, it was Sandman that stole the Argonite Weapon, but it was to score a multi-million dollar payday from Nighthawk.  But unfortunately for Whizzer, Nighthawk has set him up and tortured Paste Pot Pete into pointing the finger at a Whizzer-Wizard (say that five times fast) conspiracy to take out Hyperion and take control of Utopolis.  With the case now “closed” and the traitor revealed, Hyperion kills Whizzer and Nighthawk puts PPP out of his misery.

Next on Nighthawk’s to do list, inform Dr. Specturm of Warrior Woman’s betrayal and that she is preparing to lead an army of Starbrands from Nutopia against them.  He also blames her for killing the Iron Thor from issue one and that she plans to frame Dr. Spectrum for it.  And though it will be his word against hers, who will Hyperion likely believe?  Spectrum decides that he must run away, he doesn’t want Hyperion to kill him like he did Whizzer.  But Nighthawk doing Nighthawk things convinces him to leave his Power Prism behind so that Doom cannot track him.

Most of the rest of the issue focuses on the Nutopians and their army of Starbrands attacking Utopolis.  Even with just Hyperion, Warrior Woman and Nighthawk remaining of the splintering Squadron they force the Starbrands to retreat to fight another day.  Hyperion questions where Dr. Spectrum was during all this and WW informs him that it was Spectrum that killed the Iron Thor.

When the Squad gets back to headquarters, Nighthawk tells WW that her role in this little drama is done and that she should leave Utopolis and never return.  With Dr. Spectrum’s Power Prism in hand, Nighthawk prepares for his final confrontation with Hyperion.