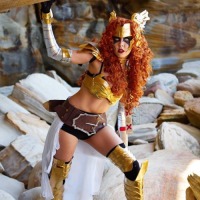 The Martian hit theaters this week, and we couldn’t be more excited here at Gabbing Geek. For those of you that didn’t listen to our book review of Andy Weir’s  New York Time’s best seller, here is a quick synopsis:

During a manned mission to Mars, Astronaut Mark Watney (Matt Damon) is presumed dead after a fierce storm and left behind by his crew (Jessica Chastain, Michael Pena, Kate Mara, Sebastian Stan, & Aksel Hennie). But Watney has survived and finds himself stranded and alone on the hostile planet with only the NASA crew (Chiwetel Ejiofor, Jeff Daniels, Sean Bean & Donald Glover) as his source of communication.

Does director Ridley Scott do The Martian justice? Or is this just another failed mission to Mars? Find out what the geeks think after the break:

The Martian is by far one of my favorite books of the year. Andy Weir’s ability to take science and make it fun and inviting, yet scary and daunting truly captivated me. So when they announced the first trailer for Ridley Scott’s movie version – I was more than a little excited, I was ecstatic. Finally I would get to see the science come to life!

I’m a science geek. I love experiments. And I’ll be the first to admit that I don’t know how everything works – I’m pretty sure I got a “C” in chemistry, but alas…I have remained curious. I love solving puzzles and ultimately that’s what science is all about, a series of puzzles that you have to solve. 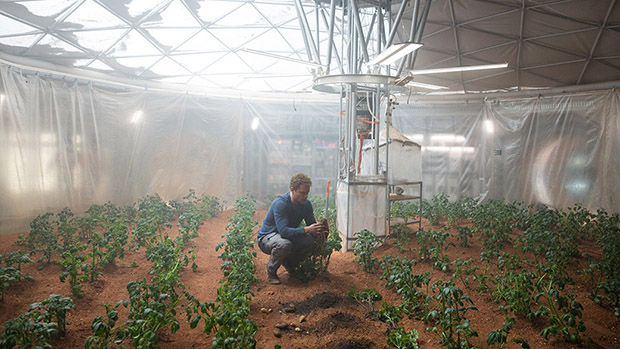 So the puzzle set before Ridley Scott was how do you take a very science heavy story and recreate the same feeling Andy Weir gave to his readers. Simple – you don’t mess with the recipe. Weir created a very interactive and engaging story, all Ridley had to do was follow the instructions. And he did – almost to the T.

I was impressed with the overall pace of the movie as it unfolded. I could see how quickly we were moving along through the dialog, the trials of Mark Watney, and the bamboozling of NASA. It felt fast – yet it was exactly how it should have played out via the book. Ridley was able to transform the words of Andy Weir into a live dramatic, fun, scary reenactment of Mars vs. everyone else.

Were there things left out of the movie that were in the book? Of course there were. And parts of the science that I loved so much in the book was skimmed over in the movie. And that is probably my one and only complaint. But remember, I’m a science geek, I like to see the problem solving – and believe me, if you haven’t read the book, you should….there are many other problems and solutions Mark encounters that were never touched upon in Ridley’s movie. Alas – despite that minor shortcoming, I still loved it.

The cast and crew were exactly as I imagined them:  fierce, funny, smart, quirky – you name it, they captured it. The moments of solitude with Damon alone are worth it. But it’s the entire cast that really makes this shine. They knew their characters, and represented them well. I think Andy Weir should be proud.

All in all – this was an awesome way to see a book come to life – hats off to Andy Wier for fantastic source material, and a double high-five to Ridley Scott for sticking to the packaging instructions. This is one movie that definitely found life on Mars despite the atmosphere for destruction.

I give this movie 9 Vicodin spiked potatoes out of 10.

It is both weird and necessary to only talk about this movie without revealing spoilers.  Weird because the movie is based on an incredibly popular book that is one of the top page turning science fiction novels you’ll ever read.  Necessary because while the movie stays true to the book everywhere that matters, it also deviates in some meaningful ways.

The best part of this movie is that it works with the book hand in hand.  The movie absolutely nails parts of the book but it actually does better than the book in a couple of things.  And the book certainly has more details (and adventures/puzzles) than the movie but the book also has some weaknesses the movie lacks.

If you’re thinking of seeing the movie–do so immediately.  And if you like it, read the book.  If you already read the book–go see the movie immediately so you can be surprised and delighted by the differences.

As a film itself…there’s no point talking anymore.  Because–