I’ve never read the 2009/2010 Siege from Marvel.  Which really doesn’t matter since that Norman Osborn/Loki/Asgard story has nothing to do with the current Secret Wars mini-series of the same name.  While many other series have only “borrowed” the name of a previous event, they are at least usually related in some way.  Infinity Gauntlet for example.  But in this case, Siege is the story about the men and women who defend Battleworld from the horrors on the other side of The Shield.

After the cut I will look at the excellent series containing Siege #1, Siege #2, Siege #3 and Siege #4.  If you are only reading the main series or are picky about the tie-ins you are reading because only an insane person would read them all, I’d recommend moving Siege onto your buy list.  It is one of the few that is heavily integrated into the main story, and you will get a lot more out of Secret Wars #6 in particular after reading this series.  (Note, I kinda spoil the end of Inferno, so if you care, make sure you are finished that as well.)

So the  first question is, if it is not related to that original event, why is it called Siege?

In the former 616 Marvel Universe, Abigail Brand was the green haired ass-kicking head of S.W.O.R.D., a subdivision of S.H.I.E.L.D., charged with defending the Earth from extra-terrestrial threats.  (No Ryan, I did not make that up.)  However, on Battleworld she has become the head commander of The Shield, and the outlaws that have been sentenced there to protect the other domains from the likes of Annihilus, Ultron and the Marvel Zombies.

I mentioned in the intro that this series ties in to the main book.  We’ll see that more so near the end.  But right out of the gate we see Ms. America Chavez and Lady Kathrine of Bishop as part of Brand’s squad.  In some of the few nice displays of cross book continuity, Chavez was sentenced to service on The Shield in A-Force #1 and Lady Kathrine in Secret Wars Journal #1.

Also of note is that Ben Grimm appears.  He seems to have enhanced abilities that almost make him more Sandman than our ever loving 616 Thing, as he manipulates the landscape around the Shield to allow Brand and her people the best line of defense.  This is all very interesting because this is the first Ben Grimm (besides a Future Imperfect headfake) that we have seen on Battleworld.

The bulk of the issue explores the relationships between Brand and her crew and recaps some previous battles at The Shield.  All seems normal until new recruit Kang appears.  Or to be more specific, when a version of new recruit Kang from 20 days in the future appears and warns that The Shield will fall and that “Thanos dooms us all.”

So remember all my talk about this series tieing in nicely with the core of Secret Wars?  Well, this issue starts with what looks like another potential tie-in as it recaps Illyana Rasputin’s arrival at The Shield.  It specifically says she has come from the Limbo domain and is quite adept at killing zombies.  There’s only one problem.  Here’s Ilyana’s last scene in Inferno:

I know on Battleworld we have the whole “dup effect” where there are multiple versions of the same character around, but in this case, both of these Illyana’s are supposedly from Limbo.

Moving on from my whining about continuity, Hel-Ranger Leah leaves her post as Brand’s second in command to head out into the Deadlands to find Illyana, her missing love.

Time jumps ahead after Leah’s departure.  First to five days before the supposed fall of The Shield and then to two.  The defenders of The Shield are not sure who Thanos is that future Kang warned them about.  After some research they discover that there are other Thanos’ on Battleworld, but the only one to be concerned about is currently starring in Infinity Gauntlet.  Brand says that they don’t need to worry about him because that story doesn’t tie into the main book.

So Brand goes to ask two captured Ultron defectors.  They claim to have turned against Ultron, but no one is buying it.  They are useful at gathering information however and can still connect to the Perfection hive mind.  When they do, they do not bring news of Thanos, but of a massive army that is on the verge of attack.  An army led by a mutated monster that was formally Brand’s mentor Nick Fury.

Things are not going well at The Shield.  the corrupted, distorted Nick Fury is leading his Ultron troops to victory.  Time is running out.  The Endless Summers (a slew of Cyclops clones) are failing to keep Fury’s forces back.  Kang isn’t of much help as the timestream is full of chronomines, until the lovebird Ultron defectors agree to join the cause.  At great sacrifice, Kang is able to pull Ultron-Fury into the timestream and use him to detonate the mines.

Leah returns with Illyana and a version of Colossus (who makes no sense if he is from Limbo as well, so I will ignore and move on) and finish off the last of the Ultron forces.

Brand and her heroes have won.  All in all a good day…until Thanos shows up and…surrenders? 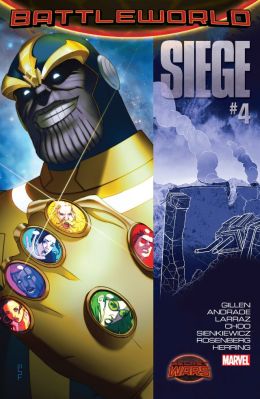 Upon presenting himself at The Shield to Brand and Kang, the duo immediately open fire on him.  Thanos does not fight back.  He says he is there to talk and if they don’t stand down and take him to a holding cell, he will reactivate The Fury.  Nobody wants that, so they grant his request.

When alone in his cell, Thanos’ plan comes to light.  He calls out and asks if Ben Grimm can hear him.  While Grimm is not familiar with the surname “Ben” he does answer.  Thanos has a story to tell him.

Sometime later, Brand and company visit Thanos to interrogate him.  He has no qualms speaking his mind.  He tells them that he is going to make a stand against the false God Doom.  Partly for his own amusement, but also to create a distraction he has put into doubt the continuity of several south of The Shield titles like Age of Ultron vs Marvel Zombies by uniting all the zones into a singular army.  An army that arrives immediately.

While Brand and her comrades are thrown into chaos attempting to defend The Sheild against the combined forces of the Marvel Zombies, Ultrons and the Annihilation Wave, Thanos continues his little chat with Ben Grimm.  He tells Ben the truth about Doom and Battleworld and the pre-Secret Wars 616 universe.  How Doom is punishing him for being the friend of Reed Richards.  That Thanos will not allow himself to die and see Doom’s face and not that of his beloved Death from a “normal” universe.

Ben says that he has a responsibility, that The Shield protects a lot of people.  Thanos tells him that he is fighting to save a hellish world that should not exist and the fight will go on forever.  That there is a better world, if he chooses to fight for it.

In a scene that echos the conclusion of Secret Wars #6, Ben is convinced and decides to head off to fight Doom.  As it turns out, the majority of The Shield is made up of Ben Grimm himself, so when he leaves, he takes the core of The Shield with him.  What is left will fall shortly after as Thanos and his amassed army continue North to confront Doom.