If you had told me six months ago that a story about a killer organism that was essentially a giant head with arms and legs would be one of the best Secret Wars books, I would have laughed at you.  Especially after I read and hated the first M.O.D.O.K. short story in Secret Wars Battleworld #1.  (Though, in fairness, that was a different M.O.D.O.K..)

But here we are, and M.O.D.O.K. Assassin has really risen near the top of the heap.  Especially impressive given my low expectations.  I currently have it ranked 18th on the Secret Wars Power Rankings.  M.O.D.O.K. Assassin got better with every issue and is one of the few books that successfully landed the ending.

The domain of Killville is ruled by Baron Mondo and overrun with assassins.  The greatest of those assassins is M.O.D.O.K., the mental organism designed only for killing.  And kill he does.  So long Bullseye.  Sayonara Doc Ock.  Sentinels?  Well…I guess that is not really killing, but please, piece of cake.  M.O.D.O.K. lives to kill and the only thing he loves is killing…until the Thor Angela drops unconscious from the sky.  The most beautiful thing he has every seen.

(BTW, at one point M.O.D.O.K. gives a description of the three domains and the ocean that border Killville…and they all match the Battleworld map!  Huzzah for continuity!)

The problem with falling head over little t-rex arms and legs for a beautiful Thor is that your appearance doesn’t lend itself to love at first site.  When Angela awakens she immediately attacks M.O.D.O.K..  He just wants to talk, maybe snuggle, but she continues to fight, even when her hammer is trapped in a forcefield of some kind and refuses to come to her when commanded.

As the battle rages, the Triad of the Assassins Guild: Viper, Kingpin and Shroud are not impressed that M.O.D.O.K. killed Bullseye last issue.  But they must bid their time for now so as not to incur the wraith of Mordo or Doom.

During the fight, Angela knocks loose a bomb that M.O.D.O.K. created that would have enough power to kill a Thor.  When it detonates, M.O.D.O.K. wraps himself and Angela in a protective field.  Saving both their lives and finally convincing Angela that he is on her side.  And M.O.D.O.K. is going to need a friend.  Remember that Assassians Guild being patient…well, so much for that.  Someone has hired them to kill M.O.D.O.K. once and for all. 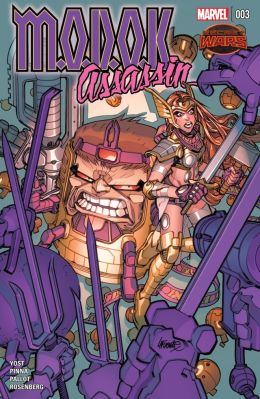 It’s M.O.D.O.K. and Angela versus…well…everybody.  Kaine, Punisher, Elektra, Jack O’Lantern, Boomerang, Black Widow, Wolverine, etc.  As is the theme with this book, they all meet a gruesome death as they are no match for M.O.D.O.K. especially with a Thor at his side.  But everything changes when a horde of Mindless Ones make an appearance.

Meanwhile, (spoilers for Secret Wars and Thors if necessary…) a still alive Stephen Strange has been informed by a still alive Beta Ray Thor about Angela’s disappearance and that neither science nor “Thorsense” has been able to find her. 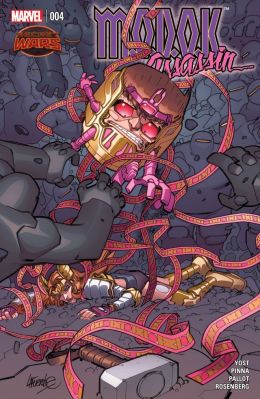 The Mindless Ones take no sides.  They kill everything in their path which includes the Kingpin.  Shroud protects the crowd for a short time until M.O.D.O.K. kills him by accident out of habit.  As the assassins continue to fall, the bond between M.O.D.O.K. and Angela seems to grow stronger and they escape, hand in hand, thanks to M.O.D.O.K.’s jet pack.

They don’t get far and are attacked by Taskmaster, who in turn is killed by the Mindless Ones.  During this time, M.O.D.O.K. has a revelation…everything that has happened to Angela, from the blast that knocked her from the sky to her inability to summon her hammer; and now these Mindless Ones attacking…it is all magic.  Which all points to Baron Mordo as the ringmaster.  Angela finds that hard to believe.  No one that knows the consequences of attacking a Thor and disrespecting Doom would do such a thing.

There isn’t much time to discuss though as the Mindless Ones continue to overrun everything and everyone.  Angela makes another attempt to retrieve her hammer.  This time forcing her hand through the force field that keeps it from her…which causes her skin and all down to the bone to be removed from her left hand.  She does manage to touch the hammer which causes a small explosion that knocks her out and temporarily disrupts the Mindless Ones attack.

In an effort to save Thor, M.O.D.O.K. attempts to lift her no longer under an evil spell hammer.  But alas, he is not worthy.  Which is too bad as the hammer would come in handy when Baron Mordo shows up to finish him off. 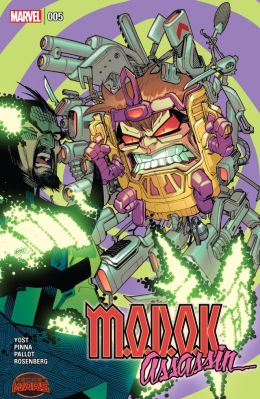 As Angela lies unconscious, Baron Mordo and his partner in magic Clea try their best to kill M.O.D.O.K..  And as has been known to happen, decide it is the perfect time to tell the good guy the entirety of their evil plan.  It was Mordo who grounded Angethor in an effort to draw in Stephen Strange in hopes that M.O.D.O.K. would kill him and then Mordo would kill M.O.D.O.K. and Doom would appoint him his new sheriff.  Seems straight forward enough.

The Thor Corps arrive to rescue Angela and assume that M.O.D.O.K. had something to do with all this.  Angela sets them straight explaining that he has saved her life and done a great service to Doom.  She will also recommend that M.O.D.O.K. become the new Baron of Killville.

After all they’ve been through, M.O.D.O.K. then attempts to kiss Angela…and is horribly shot down.  She does smile at him as she flies away and that is enough for M.O.D.O.K..  He goes back to killing, but now with love in his heart as well.

For in the end, what else is there?  Killing…and love.  Just those things.

6 thoughts on “Jimmy Attempts To Read All Of Secret Wars XXXI (M.O.D.O.K. Edition)”