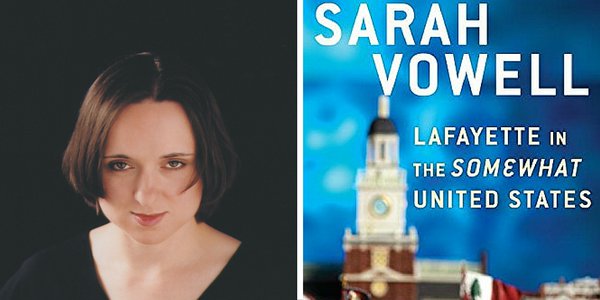 Author Sarah Vowell has a unique voice both in reality and in her reality.  The former is pretty easy to prove:  she’s not only an NPR regular contributor, but she voiced the teenage daughter in The Incredibles.

However, her passion is American history.  Vowell’s books detail some facet of history, and does so as she travels around, getting material, and recounting not only the history person or event, but also how she researched the topic, making it as much a travelogue as a history book.  Her latest is Lafayette in the Somewhat United States.  After the cut is my review and, well, SPOILERS?  It’s history.  Two hundred year old history.  We won the Revolutionary War.  Let’s move on.

So, Sarah Vowell’s focus this time was the Marquis de Lafayette, French-born aristocrat who came to America to pal around with the Founding Fathers and fight the British in our War for Independence.  Vowell takes a rather wry look at history under any circumstance, applying her modern and political perspectives to her topics.  For Layfayette, she seems to find him fascinating, while also pointing out he was basically an impetuous teenager who ran to America, abandoning a pregnant wife in the act, while also defying his own government’s official stand.

Meanwhile, Vowell is pretty quick to point out that the United States is rarely all that united.  At the time of her writing, she was witnessing a government shut down caused by disunity in the American Congress, and had more than enough evidence, both current and in the past, to point out that partisan squabbling has always been an issue.

In fact, Vowell takes the old Continental Congress more to task for this disunity than she did anyone working in the current American government.  She frequently points out that the American army often lacked equipment and pay, particularly clothes.

Vowell doesn’t really let anyone off the hook for bad behavior.  Lafayette, her subject, is often treated as a dumb teenager more interested in military glory than anything else.  Thing is, that may be a fairly accurate interpretation.  Lafayette was very young, not even 20 when he first flew to America, and he did leave behind his pregnant wife.  He grew up an orphan and held George Washington as a substitute father figure.

Vowell also makes a great deal out of how weird an alliance between the small-r republican Americans fighting a constitutional monarchy in Britain, while allying themselves with the absolute monarchy of France.

If the book has a flaw, it’s that Vowell opted to include very little of what Lafayette did after he returned to France at war’s end.  She mentions a few things, mostly Lafayette’s triumphant return to the country he fought for.  She gives us a bit here and there what Lafayette did during the French Revolution, but really, I would have loved to have found out more about this idealistic young man as he grew older.

By the by, why am I writing this up for a geek site?  Well, Vowell’s style is hardly standard for a history book, and makes the topic perhaps more interesting for her readers.  Her touches to current events and pop culture should certainly make a connection for modern readers, and she may best be described as a “history geek”.

So, since we only got a few years on Lafayette and his role in the War for Independence, let’s give this one nine out of ten aristocratic French teenagers.