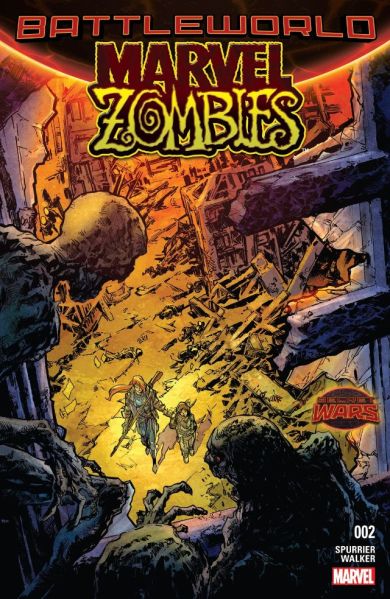 I guess I missed an opportunity here by not getting this pushed out for Halloween as it features everyone’s current favorite undead, the Marvel Zombies.

After their adventures in Marvel Zombies #1, Elsa Bloodstone and her mysterious child companion are making their way across the Deadlands.  Aware they are being followed, Elsa rigs a zombified M.O.D.O.K. with explosives and rolls him down a cavern towards their follower.  The zombie explodes and causes an avalanche that seems to bury whoever was watching them.

Trudging on, the duo find themselves caught in the web of a zombified Carnage.  Man, you just can’t catch a break in the Deadlands.  They are saved by a gun-toting Warren “Angel” Worthington.  That’s the good new.  The bad?  He can only carry one of them out of there.  Against the child’s wishes, Elsa decides to stay behind and wait.  Angel flies off with the child to supposed safety.

On her own now, Elsa continues forward and realizes that her follower is back.  She also finds the child’s baseball and realizes that she’s been tricked.  That wasn’t Angel, but shape-shifting zombie Mystique.  Elsa tracks Mystique to a nearby cave where her and her fellow zombies are…thinking quite clearly and making plans.

Elsa is confused since the zombies are usually so driven by foodlust that they can no longer reason.  But these zombies have found an unlimited food source.  A captured Deadpool and his gift of a healing factor.

The zombies have been snacking a little on Deadpool every day and staying smart.  Smart enough to rig Deadpool up in such a way that any attempt to free him will bring a horde of zombies running.  Elsa knows she can’t take them all on, so she has to leave him.

But the zombies still have the child and after apparently taking a small bite, the young one hasn’t turned.  They figure the meat must be special (perhaps a cure) and they prepare to feast.  But not before Elsa, glowing from the power of the Bloodstone, snatches the child up and makes a run for it.

As they escape the child pleads for them to stop.  They have to help Deadpool.  Elsa says they can’t go back, they’d never survive.  But they can put Deadpool out of his misery by shooting some nearby oil tanks and blowing him sky high.  (But doesn’t he have a healing factor?  Um…)  Mystique sends her horde after Elsa and the “Girl-Meat”.

Elsa and the young girl don’t have to worry long about Mystique as their mysterious follower shows up and destroys the horde.  “They’re mine!”  The two escape and hold up in a cave for the night and Elsa shares the account of her father’s death.

The next morning the duo head out once again and stumble on a “graveyard” filled with “dupes” (thanks Battleworld) that include other versions of Elsa.  Their follower has also caught up to them and reveals himself as a twisted, distorted, zombified version of Elsa’s father Ulysses Bloodstone. 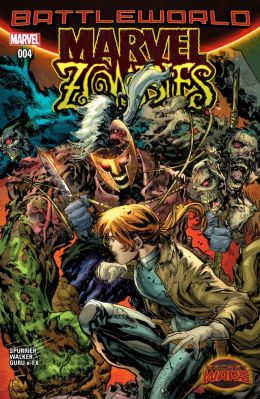 Shortly after the scene above, Elsa detaches her Dad’s head from his body with a ridiculously large blade.  But it doesn’t take.  To the awe of the nearby zombies, Ulysess reattaches his own head.  Healing without feasting thanks again to the dupe effect.  This time, the duplication of all the Bloodstones which he has collected from unwitting “relatives” that have ended up in the Deadlands.  And now he has one more stone to collect and it sits around Elsa’s neck.

When she refuses to give it to him and threatens to destroy it, he calls her a fool and says “You think the power is stuck inside the stone?”  He grabs the young girl and in another Marvel tribute to Empire Strikes Back moment he then bites off Elsa’s hand.

As Elsa begins to turn into a zombie she comes to the realization of who the child is.  She’s the childhood he stole from her.  Ulysses scoffs at her and casts the child aside.  Inviting Elsa to take her best shot.  But it’s the child that picks up Elsa’s gun and uses the final bullet to shatter all the stones Ulysses has collected.  Those that survive, Elsa eats and absorbs their power.  Using it to destroy her “father” once and for all.  Also absorbed is the young girl, as Elsa is finally whole and at peace.

For about five seconds until Mystique and friends attack.  Now with the power of the stones, Elsa has no problem defeating them.  But she realizes no one should have so much power, so she shares it with her father’s corpse…resurrecting him and curing him of his zombie-ism.  On a probational basis at least.  And father and daughter head off back towards The Shield, likely never to be heard from again, though if Marvel was doing this right, they would be.

Age of Ultron Vs Marvel Zombies #3

(I also hate the fact that the alliance “twist” in this series is never made use of elsewhere.  Though 616 Thanos does similarly unite all the zones below The Shield in the main event book, it seems to be completely unrelated to anything here.)

Once again the story here is split into three factions.  In thread number one we have the story of the people of Salvation.  Their daily lives and loves and the struggles of Hank Pym to come up with some way to beat Ultron.  Which is a tall order since he is behind the technological times by about 150 years.

Second, a mostly uninteresting origin story of Janet Van Dyne.  How she went from local “dancer” to Hank’s lover to being sentenced to The Shield.

And finally third, in what should be a significant event on Battleworld, but will be forgotten and ignored, Ultron and Magento bring their alliance to the next level as Ultron merges the zombies with Ultron tec making an unstoppable, uncountable number of undead cyborgs.

Age of Ultron Vs Marvel Zombies #4

The Zombie/Ultron Alliance (Zomtrons?  Ultbies?) have arrived on the doorstep of Salvation.  It’s taken him months, but Hank Pym aparently has an idea to defeat them.  A Hank Pym that knows what a Hive Mind is but not what the words “organic” and “inorganic” mean.  Through a process called Mumbo Jumbo, Hank will connect the minds of Wonder Man, Torch and Vision into a more powerful mind that will take over the Ultron hive and control them.  Um hmm.

We have way too many goodbyes and more unnecessary Hank Pym origin story and the Zomtrons (I like that one) breaking through the protective shield around Salvation and Janet Van Dyne showing up for reasons.

As Vision and Wonder Man are preparing to become the new hive mind, Wonder Man’s girlfriend comes along and blasts Torch out of the sky and takes his place because somewhere along the way during all this, the guy that couldn’t understand how an iPhone worked has reprogrammed her cyborg parts so that she could take Torch’s place and “live forever” with her Wonder Man.  Ugh.

Queue happy ending.  Hank and Janet back together.  Torch and his wife and their expected baby back together.  (I hated how this tried to play like a happy ending for Torch but was really a big coincidence based on the selfishness of Wonder Man’s girlfriend.  She never did what she did to help Torch.)  And all the Zomtrons and Ultron himself under the control  of the new hive mind and standing guard for Salvation.  None of which makes any sense with regards to the rest of Battleworld and Secret Wars, but I guess we don’t care.