Thanksgiving is the official start of the holiday season for you folks in the US isn’t it?  So it’s only fitting that we start this collection of Spider-Man cameos with a Marvel holiday special.  After the break, more from this issue and other cameos that don’t quite make the cut to be included in the  Spider-Man Complete Chronology.

Marvel Treasury Edition 13 (1976) – This “Giant Superhero Holiday Grab-Bag” is 90% reprints.  But also features new framing sequences throughtout that basically amount to a giant superhero snowball fight.  For example, this Ben Grimm/Spidey exchange before a reprinting of an old Marvel Team-up:

Marvel Treasury Edition 12  (1976) – The Marvel Treasury Editions were generally oversized reprints.  Focusing on Spidey or the Fantastic Four…and quite often Conan.  Conan was big in the 70’s.  But they did occasinally feature new material.  Like the final issue featured a somewhat iconic story featuring Superman and Spider-Man.  Another original story occurred the issue before the above Holiday Grab-Bag, and featured Howard The Duck moving to NYC.  Howard The Duck was big in the 70’s.

Fantastic Four 242 (May 1982) –  It’s the FF vs Terrax in some typical end of the world battle type stuff.  Also typical for a Spider-Man/Peter Parker guest appearance, he is on the sidelines drinking cocoa and just used to give the audeince a sense of the potential dangers that are unfolding.

Fantastic Four 243 (June 1982) – With Terrax dealt with, the big guy shows up.  That being Galactus.  And what is a Spider-Man to do against someone like Galactus?  Well, nothing… 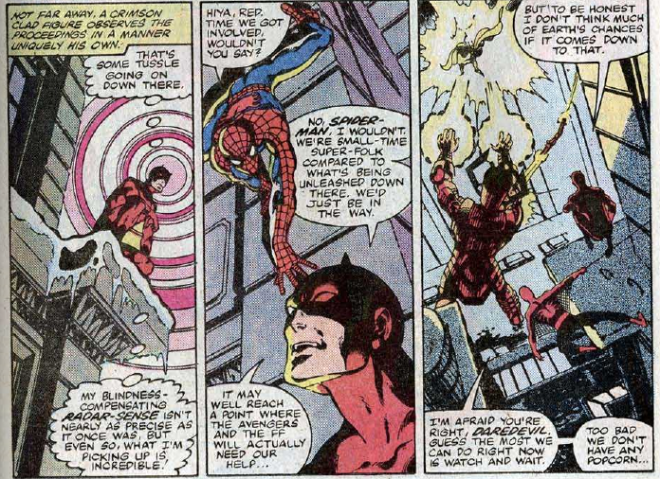 Avengers 168  (February 1978) – It’s the original “Korvac Saga”.  I’ve only read the recent Secret Wars version, so I have no idea what is going on here besides it being very windy and just another excuse to use Peter’s Spider-Sense to convey something dangerous happening.