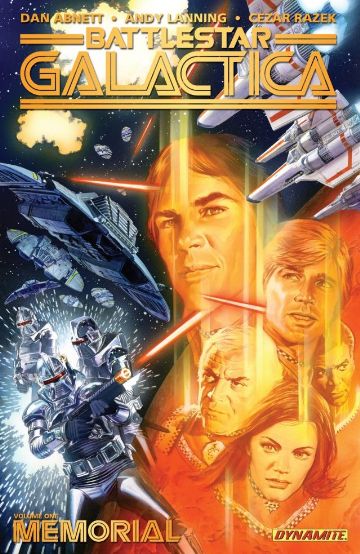 Normally, I’d avoid a comic based on a licensed property like the proverbial plague, but Comics Bento just ships stuff, so I end up with stuff I normally wouldn’t, like that Youngblood volume, or this trade from Dynamite based off the original Battlestar Galactica.

How was it?  See after the cut.

The problem with most licensed comics is that the stories and such are greatly restrained by the original source material.  Take this volume, for example.  Now, this version of Battlestar Galactica has been off the air for decades, there’s not going to be more added to this series, and some of the original cast is rather dead.  That doesn’t really change much.  The characters are still drawn to look like the actors who played them, and it’s not as if they can suddenly kill off half the cast of characters.  A comic based on a licensed property still has to fit into the narrative it’s based off.

That said, this volume did catch my eye for two reasons.

That said…the volume wasn’t that good, all told.  Decent artwork, but the story itself seems rather dull.

The volume picks up with a Cylon attack on the Galactica.  Child scientist Zee has some temporal weapons he claims are the only path to victory, so he sends out Apollo and Starbuck on the only two vipers equipped with the weapons in question.  Something goes wrong and Apollo and Starbuck are blasted to an alternate time line where Adama was a diplomat instead of a battlestar commander, and the Cylons have more or less won.

Now, this could have been cool.  We could have seen more alternate versions of the original characters, but aside from Baltar being a cyborg with the brain of a Cylon Imperious Leader drone, and Zee being evil, there isn’t much here.  Apollo and Starbuck are separated.  Starbuck gets captured and winds up in a cell with…himself.  But this Starbuck is fatter, hairier, and only out for himself.  He’s been using the Galactica as a pirate ship, and it takes the clean-shaven version of himself to rouse his conscience enough to rescue the other prisoners and then go to the defense of the resistance that Adama is commanding.

Apollo, meanwhile, finds said resistance and rallies them to be braver.  In this time line, Apollo and Boxey are dead, and his wife survived.  Adama is a beaten man.

What do you want to bet that by the time this story is over, Starbuck and Apollo have rallied both the separate groups to work together and really hit the Cylons hard?  Come on, you know that’s coming.

Maybe the problem is that the original BSG wasn’t the sort of series that loans itself well to a serious look at modern science fiction.  I like the old show, but there’s a reason the recent revamp is so much better.

Granted, anything in corporate comics limits creativity for creators, but I just felt mildly disappointed by this volume all told.  Let’s give it five out of ten temporal vipers.