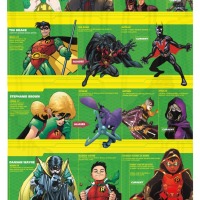 Looking over the original X-Force team line up, the group consisted of Cable, Cannonball, Domino, Boom-Boom, Shatterstar, Warpath, and Feral.  Siryn joined pretty early on as well.  If we were to hazard a guess and suggest that the characters weren’t very well developed or were somewhat unpleasant and unlikable, there may be something to that.  Of that group, most were relatively new characters.  Cannonball and Boom-Boom had been around for a while as members of the New Mutants team that X-Force had spun off from, but the rest were largely a series of question marks or attitudes that probably seemed cool in the early 90s but wouldn’t fly so well today.

Consider Cable.  Supposedly, Liefeld’s only idea for Cable was that he would be a cool-looking cyborg with a big gun.  The idea that he was an older version of Cyclops and Madelyne Pryor’s son Nathan, taken into the future to cure an awful disease that would kill him in the present, hadn’t occurred to anyone yet.  Most of the newer characters were brought in by Cable, and that was after he probably  chased off other long-standing New Mutants like Sunspot and Rictor (both of whom would rejoin the team not long after Liefeld left).  The original concept for the New Mutants was a team of mutants that were taken in by Professor X to be trained to use their powers but not to fight villains like the X-Men.  Granted, they fought villains anyway, but making that team into a group of militant first-strike types seems to be a mighty big leap.

And aside from Boom-Boom and Cannonball, the original line-up wasn’t made up of pleasant people.  Domino didn’t give a real name and mostly seemed grumpy to be there…though, to be fair, that may have just been a result of Liefeld’s limited facial expressions.  Shatterstar was a gladiator from the Mojoverse and didn’t have much to start with since he lived only to fight.  Warpath said he only joined the team to get revenge against whoever was responsible for the death of his brother Thunderbird.  And then there was Feral…

But here’s the thing.  All the other characters got better.  Bringing back a few other former New Mutants (plus perennial background character Siryn), made the team a bit less rough around the edges.  As for what happened to them…

So, what happened to Feral?  Was the Bride of Frankenstein haircut too much for some people?

Here’s an idea…maybe she was too unpleasant even by the standards of the original team.

Let’s stop to take a look at the character that may have just been a rip-off of a similarly unpleasant “half cat” woman, the Teen Titan Pantha.  Feral, as her name implies, was mostly interested in ripping things to shreds.  She didn’t seem to like, oh, anybody.  It was known she’d briefly hung with the Morlocks, and when the Toad revived the Brotherhood of Evil Mutants, he’d stopped by the Morlock tunnels to find some help and gotten it from Feral’s sister Thornn.

But, then it came out that Thornn was the good sister.

Yes, it seems that while growing up, the two sisters, born Maria and Lucia Callasantos, had an abusive, drug-addicted stepfather who may have molested the two girls before their mutants powers kicked in.  Maria (Feral) didn’t take too kindly to that and killed the man.  Then when her drug-addicted mother got upset, Feral may have also killed her mom.  Oh, and two younger siblings.  Those two at least were innocent.

In fact, Thornn got help bringing Feral to justice…from X-Force.  Yeah, it seems killing off your own family was one of Cannonball’s buttons.

Feral would pop up here and there, many times with Thornn, before ultimately being killed by Sabertooth.  But really, she was the one member of the original X-Force line-up that apparently couldn’t be dealt with.  And I’d say for good reason.  The go-to explanation of “bestial” characters like Feral is that they are more animal than human and have lower moral standards or are more likely to go nuts and start violently killing people.  As anyone who’s ever watched a nature documentary will tell you, most animals don’t go around killing things.  They attack others if they are hungry, or to protect their young or their territory.  While some characters like that, like Wolverine, have become more balanced, someone like Feral who just snarls at anyone and everyone and seems about ready to rip even a teammate’s guts out at the drop of a hat is better off being left behind.  There’s not much room for unique growth there.