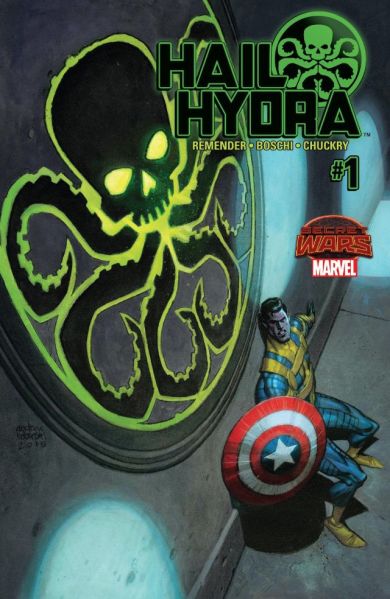 I haven’t read Rick Remender’s Captain America run, so I felt a little lost to begin this series.  I knew that Ian Rogers was the son of Arnim Zola who was raised by Cap while he was stuck in Dimension Z for over a decade (while little time passed in the “real world”).  Beyond that, the issues summary page tells me that Ian aka Nomad was now the partner of new Cap Sam Wilson and was believed dead when he was trapped in Baron Zemo’s exploding base.

But did Ian take something called the Infinite Elevator all the way to Battleworld?  Find out after the cut as I look at Hail Hydra #1-4.

I’m not familiar with Hyrda’s Interdimensional Infinite Elevator but it appears to be pretty powerful as it allows 616 Ian Rogers to escape the end of everything and find himself on Battleworld.  Which makes Ian one of the very few 616 characters that survived the incursions while not being on one of the life rafts.  This doesn’t really become much of a factor in the series but is an interesting note that we are dealing with the “real” Ian Rogers and not some Battleworld dup.  This might end up being more of a factor in the All-New All-Different Marvel Universe if Nomad appears and remembers Battleworld.  (If he even knows the significance of where he was besides it being another dimension as I don’t think anyone gives him a Doom For Dummies book or anything to let him know exactly what is going on.)

As it is, Rogers finds himself in New York, but in a domain run by Hydra.  Ian spends the majority of the issue on the run from Hydra forces…while also breaking into the Hydra base to help free Hydra captors. Nomad tries to get everyone to safety but may have met his match with the arrival of Leopold Zola.  The man that Ian would have grown up to be had he been raised by his biological father Armin Zola. 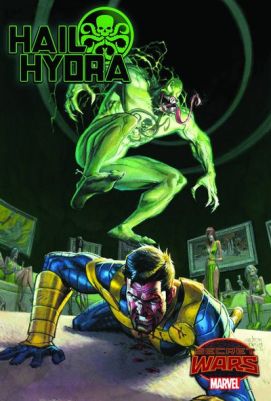 Leopold Zola thrashes his 616 counterpart Ian Rogers.  While Leopold is distracted as he gloats to his father about how easily he broke Rogers, Nomad manages to sneak off into the sewers.  Not long after, he is discovered by a band of rebels including dups of Ian’s adopted parents Captain America and Sharon Carter.

There is much distrust of Ian but Cap sees this as an opportunity to get close to Zola and to finally capture him if Ian can masquerade as Leopold.  Ian’s gaining of Cap’s trust is not helped by the fact that Venom and an army of female symbiotes known as Vipers appear in the rebel base.  Many rebels are killed or captured, but Ian manages to escape with Cap’s shield and his and Sharon’s daughter Ellie.  Unbeknownst to either of them, Ellie has been infected by a symbiote. 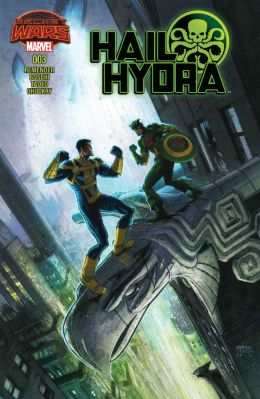 Ellie and Ian are on the run.  But also looking for revenge on Zola for the attack on the rebel base.  Ian puts a version of Cap’s plan into motion as he uses his likeness to get them into the Hydra base.  Which doesn’t really matter much as Zola immediately knows who he is and allows him and Ellie full access.  Zola offers the two a place in his Hydra empire in exchange for the regenerative fluid that pulses through Nomad’s armor.  Stooping so low as to have some form of cyborg version of Cap appear and plead for them to join them.

Not fooled by Cyborg-Cap, and unwilling to join Hydra, the two “siblings” attempt to escape.  Ian manages to use a device compliments of the late Tony Stark to trap Zola in Cyborg-Cap’s body.  But things get complicated when Ellie begins to succumb to the symbiote infection and Leopold Zola arrives with his team of Avengers. 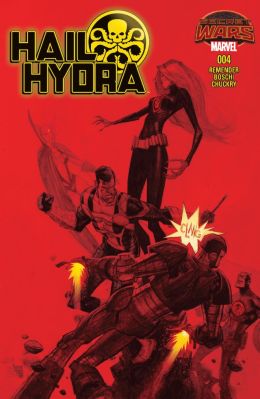 Hanging from a ledge atop one of New York’s tallest building, all hope seems lost for Ian Rogers.  Captain Hydra aka Leopold Zola, offers his hand to Rogers to help him up.  But Rogers knows that if he allows himself to be captured, Hydra will use the secret regenerative powers of his suit to enhance their reign of terror.  So he let’s go and begins to fall.  Which is kind of a stupid plan unless he expects the fall to destroy his armor too.  Does Hydra need Rogers alive to unlock it’s secrets?

Anyway, we won’t need to find out as he is rescued by a web slinging Ellie who has managed to remain herself while becoming one with the symbiote that infected her.  The two battle Zola’s Avengers until they become trapped in “mindbubbles” that are floating around everywhere, courtesy of Dr. Mindbubble.

Inside the mindbubble, Ian and Ellie experience a normal life in a country house with their parents alive again.  You see, the mindbubbles plunge your mind into an alternate reality where you get to live out your ultimate desires…until that desire decides to kill you.  In this case, Sharon Carter draws a gun on them during a peaceful lunch on the patio.  Ian disarms her, and realizing what is happening shoots Ellie and then himself to free the two of them.

Back in the “real world”, Ian and Ellie attempt to escape through the Infinite Elevator.   As the doors to the elevator close, Ellie is shot through by the Baron von Strucker Iron Man.  Ian comforts his “sister” and hits the 616 button.  Iron Man’s final two missles cause the building holding the elevator to be destroyed.  Zola and his Avengers search the area but there is no sign of Nomad, his sister or the elevator.  “Gone.  As if they never existed.”