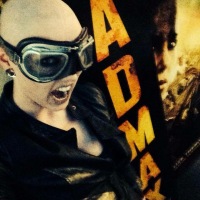 The Justice League has been DC’s all-star team from its earliest founding.  That is, unless you’re aware that the original purpose was to give exposure to the company’s lesser-known heroes, which would be why Superman and Batman only made sporadic appearances in the early missions because they were too busy to actually attend missions and meetings.

Some days I wish I could use that excuse to get out of meetings.

But, you know, in retrospect, the League was the all-star team.  Then, around 1984 or so, Aquaman told the big names to take a hike if they were too busy to help and recruited some new heroes to fill the ranks for a period while operating out of Detroit.  Those new recruits included Gypsy.

Let’s get the obvious out of the way first…that is one screwy superhero name.  While Cynthia “Gypsy” Reynolds did apparently have Romani blood in her veins, that superhero name makes no sense.  It would be like if the original League’s superhero names were Kryptonian, American, Paradise Islander, Atlantean, Fast American, Blinged American, and Martian.  Of those, only Atlantean might make an acceptable codename, and then only if Aquaman thought calling himself by his nationality was an acceptable ways to be known to the public.  At least J’onn J’onzz added a “Manhunter” to that whole “Martian” thing.

But anyway, here was Gypsy.  She had a couple powers of more or less unknown origin.  She could make herself more or less invisible, cast illusions, and had some precognitive abilities.  She dressed like a traditional Gypsy, probably after raiding Madame Xanadu’s closet, and joins the League while basically being a teenage runaway.

Yeah, you read that right.  Her powers kicked in, she ran away from home, and the Justice League, which at the time included a telepathic Martian didn’t think sending the underage girl back to her parents was a good idea.  Did they not realize the girl who wasn’t old enough to buy cigarettes didn’t seem to have a home?

Actually, Gypsy bonded quite a bit with J’onn, possibly because he reminded her of his own dead daughter…and still he let her stick around.  Man, that makes no sense. 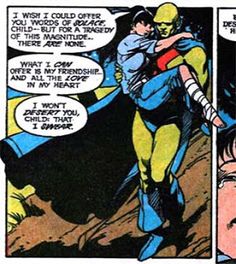 That League didn’t last long.  Gypsy even foresaw the deaths of her teammates Steel and Vibe, but I guess she didn’t warn them.  To be fair, Vibe has gone down in history as one of the worst ideas ever perpetuated as a Justice League member, since he was basically a Puerto Rican stereotype who spent most of his first appearance breakdancing for the first few pages of a JLA comic.  George Perez hated the guy enough to basically make him the one guy who didn’t appear on the massive “every member ever” cover of JLA/Avengers #3, though he does seem to be clinging to Machine Man’s leg so maybe someone else drew him in.  Perez is Puerto Rican himself, and might have only been more offended if Vibe’s code name was Puerto Rican instead.

Hey, we have a theme going here today.

Shortly after Vibe and Steel were killed, Gypsy did what she should have done in the first place and went back to her parents.  That didn’t last long, because League foe Despero showed up and easily killed her mom and dad while she used her illusion powers to make a run for it.

After that, Gypsy mostly bounced around.  She joined Booster Gold’s corporate team The Conglomerate, got J’onn as basically a stepfather, joined the Justice League Task Force, and then the Birds of Prey.  Her look has changed a couple times over the years, but she’s still going with the superhero name of Gypsy.  That’s just nutty.