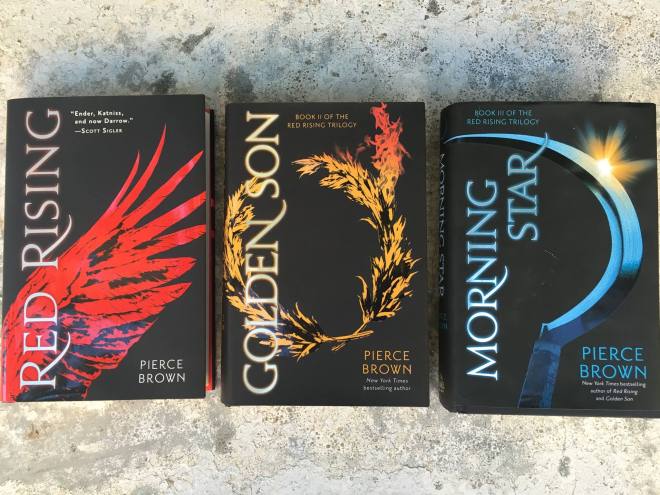 The final book of the Red Rising series was released last week and for the first time in the trilogy I did not make it through the book in a day or two.  I found myself dragging my feet, both propelled forward to find out what happens next and also unwilling to see it all end.  Because it is all good.  So good.  And to have a series be this good and deliver on its promise is rare.  But I did finish, as these things must.  So jump after the break to read my spoiler-free thoughts on the conclusion of this epic tale.

Although this review has no spoilers for Morning Star, I’m going to assume you’ve read Red Rising and Golden Son already.  If not–stop reading here and go read those books and I’ll accept any baked goods or Amazon gift cards as a way of thanks for introducing you to the series.

If you’ve read the first two books you know the basics.  And you know how amazing those two books were.  Red Rising starts in an intriguing science fiction world and then quickly turned into a Game of Thrones meets Hunger Games before flying back into science fiction by the end.  That first book was a delight but left me wondering how the rest of the series would scale–if this was the story of how to overturn a solar-system-wide system then it can’t be a small story like being in school.

The second book certainly kicked it up a notch, not just in taking the story to a bigger level and revealing the cracks in the system our hero is trying to destroy but also in the overall pacing and action.  Golden Son showed that the transition from small story to big could be made and Pierce Brown was nailing that transition.  The second book ended as many middle-trilogy-stories must with a huge cliffhanger and things seemingly beyond despair.  Could the third book deliver on the promise of the first two?

Morning Star is the conclusion we fans deserved.  As delivered in a way only Mr Brown could deliver.  It has big, epic battles and small, intimate moments of betrayal and hope and loss and celebration.  The final book not only delivers on a few moments we were promised in the first books (I won’t get into those here) but also has plenty of surprising moments throughout.  Bottom line: if you liked the first two books you will love the conclusion.  And you’ll also love picking up on the sly fan jokes scattered throughout the book.  Star Wars makes its expected return but other pop culture references are fun to discover.

As a standalone book, Morning Star is both better and worse than the two before.  It has a slower pace than Golden Son, but that’s intentional and needed.  It also appeared a bit rushed–there are a number of typos and unedited portions especially in the last third.  But all of those are forgivable sins.  Because at the end of the day we were given an incredible ending to an amazing epic.  (Side note: see George R R Martin and Patrick Rothfuss–it can be done within a reasonable amount of time!)

The book also has at least one more serious flaw, which I’ll address later in a spoiler-warned note so you won’t be influenced.  Be sure to read that after you’ve finished the book. But for now, go read Morning Star immediately.

And thank you, Pierce, for giving us one gorydamn Helldive of an adventure the past few years.  I know you have more stories to tell, other worlds to visit, but I hope you’ll return to the Core a few years down the road.  I’ll be waiting.

Score: 10 out of 10 slingblades carved into our hearts and minds