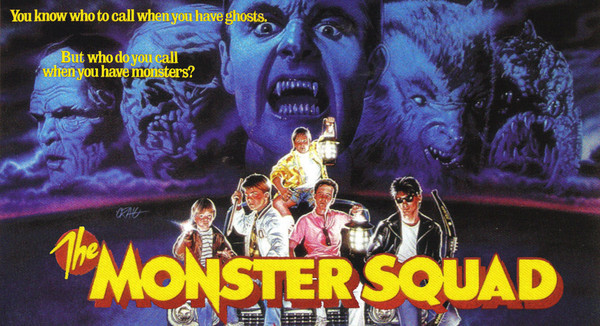 I hate nostalgia.  I really do.  Glorifying stuff from the past simply because it was a beloved thing of the past?  Not for me.  I’d much rather judge something based off its actual quality, not some warm feeling I had when I was ten.  Besides, revisiting a lot of those older things shows many of them weren’t that good to begin with.

So, with that in mind, I decided to check out The Monster Squad just before it left Netflix.  I’d seen it once from start to finish as a kid, remembered more or less liking it, and was wondering how good it actually was.  Anyway, thoughts after the cut.

All things being equal, it wasn’t that bad.  The movie is very much a product of its time in multiple ways.  It is the sort of stereotypical 80s kid adventure movie, only with a body count.

Yeah, you read that right.  People die in this movie.  Dracula even kills the only black guy with a speaking part in the movie.  The only thing that keeps that moment from being a total stereotype is that he dies second…unless you count the vampire bride in the opening scene and those poor folks that get sucked into limbo, though they apparently don’t die.

Yeah, SPOILERS for a 20+ year movie, but my recollection of the ending was a bit off.  I remembered Dracula getting sucked into limbo with what I thought was the cured werewolf guy screaming, “NOOOO!!!” and thought it was unfair.  I was wrong.  It was actually VanHelsing popping out of the portal to limbo to make sure Dracula got sucked inside.  He even stopped to give the main kid a thumbs up.  You know, give the movie a sort of circular story to it, showing VanHelsing showing up to finish the job he screwed up a century earlier.

Though now that I think about it…if VanHelsing was a historic figure, wouldn’t most people know Dracula was real?

I probably shouldn’t think about it too hard.

Anyway, the basic plot has the classic Universal Monster movie characters appear in some small American town where there may be a chance to stop them once and for all once a century.  The only people wise to it are the kids in a monster fan club.  The kids actually range in age a bit, running from an older bad boy type who mostly joined to spy  on another kid’s older sister, the prerequisite fat kid who seems to go solely by the name Fat Kid for the movie, and a small boy with a beagle.  That’s not counting the leader kid whose kid sister keeps tagging along, and whose dad is a cop in town.  These guys know all about monsters and horror movies, and they better.

Props to how the monsters come together.  Dracula is flown over in a plane before departing with a second casket holding an inert Frankenstein’s monster.  The Wolfman comes into town asking to be locked up before being shot and left for dead (he got better when the moon came out).  The Mummy just walked out of a museum, Dracula made some more brides for himself, and the Creature from the Black Lagoon just pops out of a swamp.  I’m assuming the Invisible Man is just hanging around in the background not talking.

As it is, Frankenstein’s monster defects to the kid’s side pretty quick, though he proves mostly useless after he himself is knocked out by falling debris.  Plus, he also gets sucked into limbo at the end of the movie for reasons, despite being a good monster.  Though the limbo portal isn’t very picky and seems to be rather haphazard based on how strong it is.

Truth be told, Frankenstein’s monster is one of the few recognizable names in the movie.  As played by character actor Tom Noonan, he’s a sweet guy who just wants to hang out and play with a small girl.  The only other actor that was recognizable at all was Wonder Years cast member Jason Hervey in a minor role as a school bully.

Now, this is a kid’s movie, so the monsters can’t be too effective.  Yes, Dracula, the Creature, and the Wolfman all manage to kill people (an endless parade of cops just keep running at these guys for some reason and it looks like some won’t be getting up again afterwards), but none seem capable of handling a bunch of kids.  Dracula himself gets manhandled quite a bit, being burned by the garlic on a slice of pizza, or even getting apparently harmlessly impaled on a metal fence post.

Heck, by the time the limbo portal opens, the viewer might want to wonder why.  The monsters, aside from Dracula and Frankenstein’s monster, are all dead themselves by then, and Dracula isn’t looking too good either with a stake being shoved into the general vicinity of this heart.

Two things to make note of…the monster make-up and effects were top of the line for the time.  Stan Winston really knows what he’s doing with that stuff.  And while the cast may not have a lot of break-out stars, the script did.  Shane Black, writer of a bunch of action movies, and then director of films like Kiss Kiss Bang Bang  and Iron Man 3 got a co-writing credit with the film’s director Fred Dekker.  There are a few good lines in there.

There’s also a montage scene and a half-assed rap song over the closing credits, so you know its an 80s kid adventure film.

All things being equal, it was OK.  It would probably work out just fine for kids.  Let’s say six vampire brides out of ten.