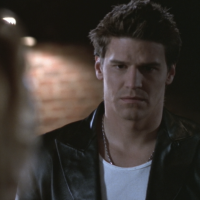 In 1993, DC Comics tried an experiment.  They created a line of comics dedicated to giving minority writers and artists a chance to create their own superheroes.  Dubbed “Milestone,” the initial comics had some success, the most noteworthy being Static, a teenage boy with electro-magnetic powers that managed to gain his own animated TV series and has been popping up around the DC Universe ever since.

A little less well known was a guy called Icon.

Icon was basically the Milestone version of Superman.  He was an alien, living on Earth, whose own natural abilities allowed him to be something of a caped hero.  Possessing vast strength, flight, and various other standard Superman-ish abilities, Icon was meant to be an inspiration to people everywhere, just like Superman.

That’s actually about where the comparisons stop…

See, everyone knows the Superman story.  The last survivor of a doomed planet, infant Kal-El was rocketed to Earth where he was raised by a kindly couple, two farmers from Smallville.

See, Icon didn’t come to Earth as a baby.  He was an adult.  And he didn’t look human initially either.  Nope.  Icon, see, was originally named Arnus, and he was taking a vacation when there was an accident on his space-faring ocean liner.  Arnus managed to get to an escape pod, and when the pod crash-landed, he was altered to appear similar to the first sentient life form to find him, and then he could safely wait until he was rescued.

Arnus landed in the American Deep South prior to the Civil War.  And he was found by a slave.

Oh, and that distress signal might take a while.

Arnus, now known as Augustus Freeman, had what was by human standards a particularly long lifespan, so waiting wasn’t much of a problem.  Yes, being a slave was a problem, but at least he stood a chance to live long enough to finally get rescued from this backwater planet the locals call Earth.  All he’d have to do is continually fake his own death and come back as his own son while he waited.  Simple enough.

Though Augustus would work with the Underground Railroad and serve in the Union Army during the way, for the most part he tried to stay out of sight.  Using his long lifespan, he got himself some level of comfort working as a corporate attorney.  He probably would have never become a superhero at all if it weren’t for his sidekick.

Yes, he had a sidekick. 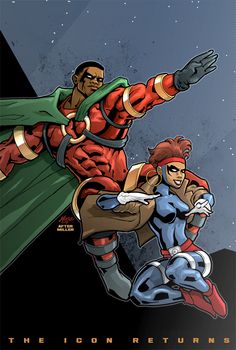 One day, some guys broke into Augustus’ home, so he used his superpowers (for the first time in ages) to defend his home.  The act was witnessed by one Raquel Ervin.  Raquel was politically liberal to Icon’s staunch conservative, and she gradually got him to re-evaluate various factors in his life, like his political stances and whether or not he should wear a cape and help people.  For her efforts, Icon gave her a costume and some of his own advanced technology to allow her to help him under the codename Rocket.

Now, the Milestone line didn’t last.  Outside a crossover with the Superman books, where two distinct universes (DC’s and Milestone’s) were threatened by the same interdimensional bad guy, the characters didn’t even interact, and in that case, both universes thought the other was completely fictional.  That sort of makes sense from the Milestone side, since Superman would be a fictional character there, but how exactly that worked from the DC side I cannot say.

After some collapsing and re-inflating (?) of the universe following the death of Darkseid in Final Crisis (it’s always that guy), Icon and the other Milestone heroes came to be full-time residents of the DCU, with no memory of the previous crossover.  And aside from both Icon and Rocket being characters on the Young Justice animated series, there hasn’t been much sightings of the pair since aside from a cameo here and there.