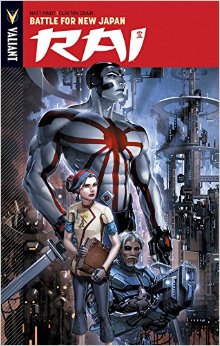 Comic Bento sent me the first volume to Valiant’s recent resurrection of their Rai character.  I rather liked it and reviewed it here a couple weeks ago.

So, liking it meant giving Volume Two a shot.  Review after the cut.

Volume Two picks up  a couple months after Rai learned he had a mother, and that the artificial intelligence “Father,” controller of the giant satellite of New Japan.  Rai has a few allies, such as a teenage girl, the pulp hero Spylocke, and maybe the mysterious leader of the anti-tech Raddies, Silk.

Author Matt Kindt has a lot of balls in the air here.  The Positronics and the Raddies are at war.  Spylocke wants something off the remains of Earth, which is not as inhabited as the residents of New Japan have been led to believe.  And Father may or may not be able to read Rai’s mind.

Clayton Crain’s artwork remains gorgeous.  I don’t think there’s a better way to describe what he does than that.

Of course, while Rai does manage to successfully get all the pieces together to knock Father over, he can’t win yet.  The series would be over if he did!

I have two minor complaints.  The first is I think a little more knowledge of other Valiant books.  Was that a spider-alien I vaguely remember from the last time I read any Valiant books back in the 90s?  Should that other character mean more than I am getting?  The other is these trades are so darn short.

With all that in mind, I am giving this one nine Rai models out of ten.