If you’ve spent any amount of time reading articles at Gabbing Geek then you probably know I may have an unhealthy obsession with Spider-Man.  So it only seems fitting that for my (at long last!) final Secret Wars post, it would be Spidey related.

After the break a continuation of the Spider-Island story line with the usual twist on the ending, “what if Spider-Man hadn’t saved the day?”

It’s been awhile, so refresh yourself on what happened in issue one and then we’ll continue.

Not surprisingly, Flash Thompson’s gamble to turn the infected heroes into Marvel Monsters is a success.  The rebellion suddenly has a few more allies including a Lizard serum infected Hulk, a vampire Captain Marvel, Cap-Wolf and Tony Stark under the influence of the Green Goblin serum.  Stark’s mind is free from the Spider-Queen, but of them all he seems the most unstable.  He even takes things as far as to change his armor to be more Goblin like and starts riding a glider.

Flash and his new team attack an AIM base in an attempt to rescue Stegron the Dinosaur Man.  Stegron is a prisoner of the Spider-Queen and all around nutjob, but he is also a genius in the field of genetic mutations.  Flash and the Vision find and free Stegron, but make a remarkable discovery in the process.  Spider-Man, alive and well.  He is unmasked and to the shock of Flash Thompson, he is Peter Parker!

[All the Spider-Island issues also feature a Spider-Girl back up story that has nothing to do with Secret Wars, so I won’t be covering it here.] 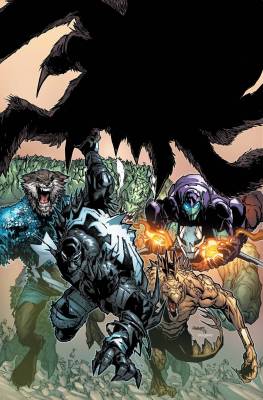 Flash and his team of rebels have escaped from the AIM base with Stegron and Spider-Man in tow, and the Spider-Queen is not happy.  She is on to the fact that the rebels have discovered that further mutation will not cure them, but will give them their minds back.  But she believes that also makes them weak and prepares to attack.

In the underground base of the rebels, Flash and Peter Parker have some catching up to do beginning with the reveling of each others secret identities.  Former high school rivals turned good friends and now super hero partners.

The rebels are still greatly outnumbered but Stegron and Tony Stark are working on a machine called the “retro-generation ray”, which had previously been used to reanimate dinosaur skeletons.  What exactly will it do to the infected?

While Peter spends his next 26 hours creating as much lizard serum to use to turn as many of the infected as possible.  He also sends Flash and the Vision to his old apartment to retrieve “something” that will help them against the Queen.  While there, the pair are attacked by mutated versions of Betty Brant, Mary Jane, Sharon Carter and Carlie Cooper.  Figuring it is a trap, the heroes still feel responsible for capturing the ladies and bringing them back to base and “saving” them with the Lizard serum.

Unfortunately, all the ladies have been embedded with miniature bombs that the Vision deactivates just in time.  But the bombs are also tracking devices and the Queen’s men have found their base and are attacking.  (Couldn’t Vision have scanned the ladies before bringing them to their super secret base?)

Realizing he is continuing to lose his mind thanks to the Goblin serum, Tony offers to sacrifice himself to take down the infected Giant-Man and give the rebels time to escape.

The rebels have escaped from the Spider-Queen’s horde and made their way to a sub-basement below the ruins of Avengers Mansion.  Peter reveals (to the readers at least) what the Vision and Venom went on a mission to retrieve from Peter’s old apartment last issue.  A stealth suit readers may recognize from the Big Time era.  Peter has tweaked it to give Flash protection against the Queen’s sonic attacks.  Flash puts it on under his symbiote.

Remember I wondered what Stegron was going to do with that retro-generation ray?  Well, it seems he’s going to do the same thing he’s always done with it.  Bring dinosaurs back to life.  Every ally helps I guess.  (Not that anyone will care, but when I read these issues I had just read Amazing Spider-Man #165-166 for the Spider-Man Chronology which featured the first time Stegron used his ray to bring dinosaurs back.  Was an odd coincidence.)

With their new dinosaur army keeping the Queen’s army busy, the rebels take their attack directly to her.  The battle is a success, but while the rebels stop to contemplate if they should kill the Queen or not, they give her time to further evolve into a massive spider.

Part five, the grand finale.  The giant, mutated Spider-Queen is handing the rebels their collected Spider-Asses but Flash makes good use of Peter’s tweaked stealth suit to survive the Queen’s sonic attack and get on top of her.

Out of options, Flash asks the Venom symbiote to save them all by leaving him and possessing the Spider-Queen.  It is reluctant at first, but agrees to do it to save everyone, but more so to save it’s friend.  As Spider-Man swings in and rescues Flash, the symbiote forces the Queen to jump from the top of the former Avengers Tower and kill herself.

Or not…she survives, barely, but the symbiote is dead.  (Really, that would kill the symbiote?)  But alas, on the ground she is now open to attack from Stegron and his reanimated dinos…including multiple T-Rex’s.  They feast.

High above, the battle has taken a toll on Flash.  Without the symbiote to protect him, he succumbs to the many injuries he sustained fighting the Spider-Queen.  He goes out with a smile knowing that he helped save everyone.

An epilouge that takes place days later has a Thor coming to the domain of Spider-Island.  It’s citizens now freed of the Spider-Queen’s hive mind.  However, they all still remain monsters of some sort: vampires, werewolfs, lizard, but no one cares as they have their freedom.  Peter Parker is appointed the new Baron of the domain and proposes they change the name from Spider-Island to just Manhattan.

Thor: There is already a Manhattan.

And with that I FINALLY finish my Secret Wars write ups.  While they were much more enjoyable to do than DC’s Convergence, the share number of them (almost 250 issues in the event in total) eventually weighed me down and wore me out.  I’m glad to have it completed though.

In the future, while I will likely be sucked into reading events like Civil War II, don’t look for me to cover every issue like I’ve done here.  🙂