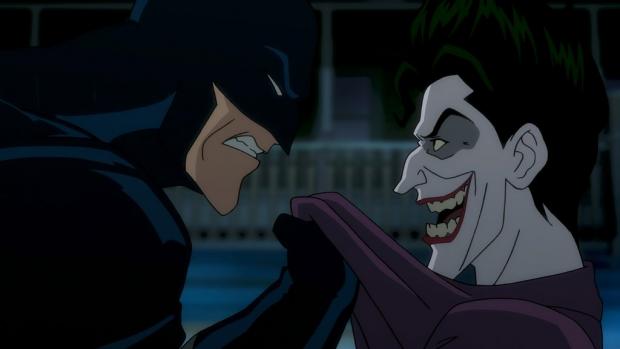 Along the lines of Batman Year One and The Dark Knight Returns, 1988’s Batman: The Killing Joke is considered a classic and one of the best Batman (and Joker) stories ever.  Written by legend (and all around curmudgeon) Alan Moore and fantastic art by Brian Bolland, this one shot would lay the groundwork for many years to come in the Bat-books, particularly for one Barbara Gordon.  It is here that the tragic events that turn her from Batgirl to eventually Oracle occur.  (I kept that vague, just in case I have to worry about spoilers, which I probably do not.)

The book is violent and a physiological head trip for all involved, especially the Gordons.  We get perhaps the most definitive Joker origin (if there can ever be such a thing), in the pre-New 52/pre-Zero Hour/can anyone keep track anymore? continuity.  (On a sidenote, the upcoming issue of Justice League will supposedly reveal the Joker’s true name that Batman learned while God-ing out in the Mobius Chair.)

It will be interesting to see how honest the animated film is to the source material.  Warner Bros. has reportedly given the ok to make the film R-rated (isn’t everything these days?) but a rating has not been given yet.

You can watch the “trailer” (and more) after the break.  I found it a bit weak (and wonder how legit this is, more on that after the break as well) and I don’t know that it would draw in many fans who don’t already have some idea what is going on.  But they still have time, and this feels more like a teaser trailer than a full trailer.  But with Kevin Conroy and Mark Hamill on board as Batman and the Joker respectively, count me in.

Here’s the “trailer” that is making the rounds:

And I’m not exactly sure what this is, but it does seem to have more footage from the movie:

As well as this behind the scenes preview:

The first two seem to feel a bit cheap and poorly edited and I get the feeling these “trailers” are fan made and have been edited and spliced together from the preview.  The preview is well made, so if you can only watch one, watch that.  If you just want to see the footage without much else, watch the others.

In either case, this is an exciting project and with this much footage hitting the mainstream outlets, I’m sure we’ll get an official trailer soon enough.