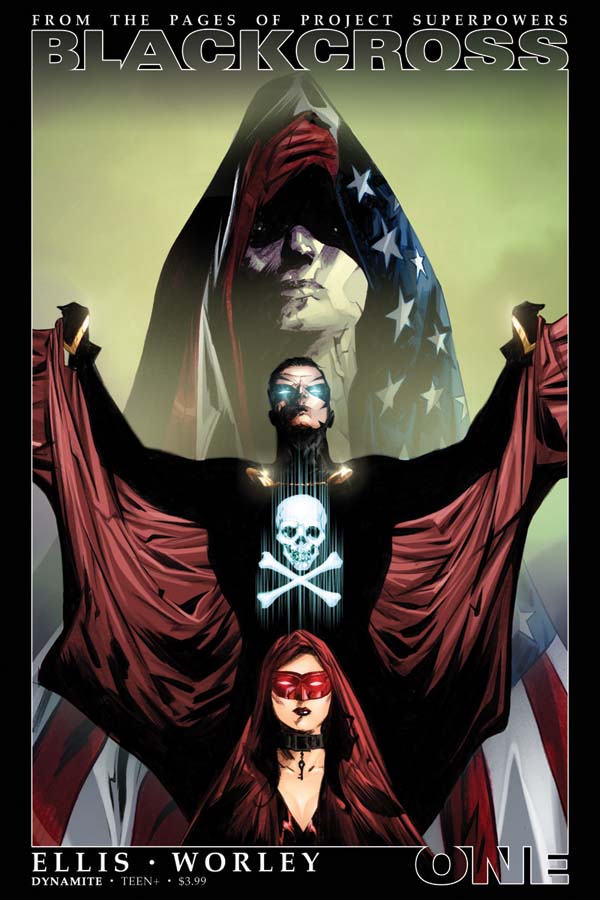 Project Superpowers was a series from Dynamite Comics that used Golden Age public domain heroes to tell modern stories.  These were heroes created by old comics publishers that went out of business and no one bought the rights to their characters.  Technically, anyone can use them.  Dynamite did.

Blackcross is a spin-off mini-series from the looks of things involving a super powered serial killer who is on his way to the mysterious town of Blackcross in the Pacific Northwest.  Some folks there have had weird things happening lately…

The book comes courtesy of Warren Ellis, one of those guys who says he hates superheroes but keeps writing adventures featuring them.  As it is, this series mostly comes across as a horror story.  The unstoppable killer literally wrapped in the American flag rips cars apart and then the drivers while saying he’s doing it all to keep everyone safe.

Meanwhile, in Blackcross, one resident sets himself on fire for no discernible reason, and a pharmacist who’s in the Witness Protection Program after witnessing a crime gets hit with a mail bomb of some kind.  Plus, the fake psychic lady calling herself Lady Satan is now apparently having real psychic visions.

What comes out is that the world this story is set in doesn’t have people with superpowers, and some people from another world are not necessarily content to let things lie one way or the other.  To say more would be to give away spoilers, so I’m stopping there.

A little familiarity with the Project Superpowers characters might have helped me out a bit here.  These are very old comic book characters, and the Golden Age wasn’t above having heroes using lethal force on a regular basis.  In some really old stories, even Batman would carry a gun.  Ellis does as he usually does insert some of his political ideas, making the patriotic character from the original work the bad guy, plus some of his standard over-the-top violence combined with short, terse dialogue is all there.

Colton Worley’s artwork mostly works here, but the final fight scene in the last chapter is a bit hard to follow.  With one noteworthy exception, I wasn’t even really sure who did and didn’t survive it among the good guys.  The moody darkness of the early chapters suited him fine.  It was the ending where the problems emerged.

So, let’s say seven and a half forgotten Blackterrors out of ten.

NEXT BOOK:  What if you’re the only guy without superpowers in the world when suddenly everyone has superpowers?  That’s the premise of normalman.  But also the premise of Titan Comics’ Ordinary.  Be back for that soon.