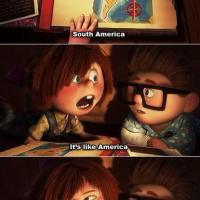 The writers and producers of The Simpsons had come under the impression that Tom Cruise wanted to do the show, so they wrote this episode with him in mind.

Cruise wasn’t interested after all, so they gave the part to Phil Hartman.  I think they’re better off for it.

Homer is supposed to pick up Bart after soccer practice, but he forgot.  As Bart sits in the rain, he has no way to get a ride.  Psychic orders can only get through to Milhouse, and Homer needs time to think when the TV, the dog, and Maggie all keep making Bartish sounds.  And when he did remember, he had to run back for his pants.  Ned Flanders saw Homer’s doodle.

So, what can Bart do?  It’s not like he can get a new father…or can he?

Well, not really, but he can tell a made-up story to the Bigger Brothers organization and get Tom, a Navy SEAL who can take Bart on motorcycle rides, loan him neural disruptors for Show and Tell, and then go hang gliding.

Homer got a little suspicious when Bart left for the Father-Son Picnic without him.

Visual proof acquired thanks to some handy binoculars, Homer goes to the same nonprofit to get back at Bart and gets paired off with Pepi, a rather sad boy who lives in a bad neighborhood where people sleep in dumpsters just like Oscar the Grouch.  Homer’s less-than-impressive knowledge and other factors really impress a kid that far down the economic ladder, and it will only come to a head when Bart’s lies about Homer catch up to everyone.

Oh, meanwhile, Lisa is addicted to a 900 number.  But who cares about that when the street brawl is coming?  The one inspired by the epic fistfight from The Quiet Man?

Yes, Tom encounters Homer at a SeaWorld knock-off and when Homer happily agrees that he is the drunken gambler, an epic fistfight breaks out between the two men.  Homer surprisingly holds his own for a while, as the two titanic grapplers fall down and then propel themselves up the walls of Springfield Gorge.  But Homer can’t possibly win this one, and that leaves Tom and Pepi alone until Bart connects the two who need each other more than either needed a member of the Simpson family.

The fight has the desired effect, because now Homer and Bart can bond as Bart learns lessons from Homer…on how to fight dirty.

Well, there had to be something Homer knew that would interest Bart.