(Editor’s Note: Let’s all be kind to Jimmy and pretend it is the week of May 20th.  He really does try very hard to get his work done on time.  But for someone with commitment issues (ask Ms. Impossible) he can’t seem to say “No” to any project that comes his way.  So remember, it’s May 20th, Convergence is not over, and Jimmy is awesome.  Thanks from Gabbing Geek.)

Hey everybody!  A couple of clunkers in this batch of issues as we finish up the penultimate week of Convergence.  I’m looking forward to next week when the finale gets released.  I’m sure it will all start making sense at that point.  I’m sure nothing crazy and continuity shattering will occur and everything in the New 52 will be just as we left it two months ago.

END_OF_DOCUMENT_TOKEN_TO_BE_REPLACED 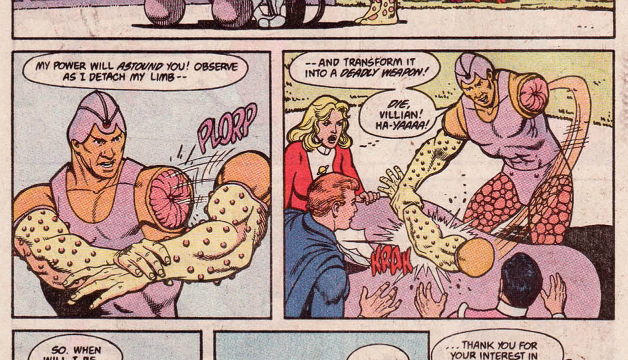 There are SO many Marvel/DC superhero movies that have already made it to the Silver Screen.  Superman.  Batman. Spider-Man.  X-Men.  Green Lantern.  Hulk.  Iron Man.  The Rest of the Avengers.  GotG.  Daredevil.  Fantastic Four.  Blade.  Even Ghost Rider!  There are even more announced in the DC/Marvel slates; franchises such as Dr Strange, Suicide Squad, Black Panther, and of course the legendary AQUAMAN.  So how bad do you think the others feel who aren’t even announced?  How sad they must be!  Who has the biggest reason to complain?  Click on for the answer!

END_OF_DOCUMENT_TOKEN_TO_BE_REPLACED

I’ve never been much of a fan of DC’s Legion of Superheroes.  I couldn’t begin to tell you why.  I do enjoy DC’s black-and-white reprints of various older books.  The Showcase Presents series gives the reader usually around 500 pages or so of old stories for a low price, and are a good way for the fan of Silver Age silliness to find the old stuff without breaking the bank.  This was how I was able to write columns in this series on both Captain Carrot and the Unknown Soldier.  But I have limits, and one of them is old Superman stories where Superman often saves the day using deception.  The reader will think Superman is in a bind of some kind (never a physical one), only to discover he was aware of the problem the whole time and had already beaten it and was just waiting for the end of the story to tell everyone.  My one attempt at a Legion Showcase was done by Superman’s writers and artists and the stories were about the same level of jumping out at the reader and shouting, “Psyche!”  But the Legion lasted a good long time, and has been rebooted tons of times since then.  One of the legendary runs was by writer Paul Levitz, who wrote the book for 15 years and during that time he managed to include every member of the Legion at some point, even the dead ones using flashbacks.

The one exception was Tyroc.