A common theme to many a Misplaced Hero is that many times there’s only a single creator who’s really enamored with the character.  Oh, other writers and artists may have a decent run with the character, but often once the original creator moves on, the character is quickly relegated to the background or written out of the book entirely.  That is more or less what happened to Snapper Carr.  Creators showing favorites is nothing new, such as how Geoff Johns dealt with Black Adam, or Brian Michael Bendis’ clear love for Luke Cage.  But sometimes the creator love goes to a new character that doesn’t always stick around long.

One such example there is Faith.

END_OF_DOCUMENT_TOKEN_TO_BE_REPLACED 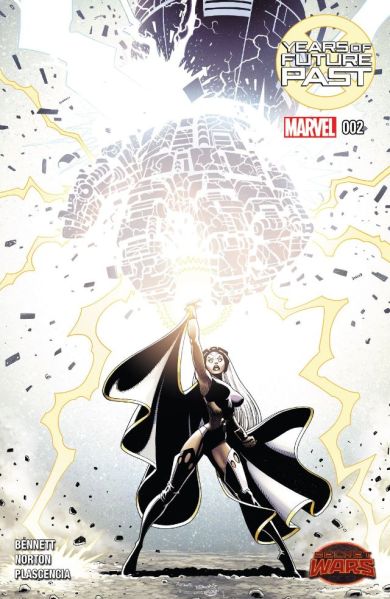 Marvel has really gotten a lot out of a story line that was surprisingly only two issues of Uncanny X-Men back in 1981.   The Chris Claremont/John Byrne classic has spawned numerous spinoffs and tie-ins and of course the best X-Men movie.

Unfortunately, we also got the Secret Wars tie-in/sequel Years of Future Past.  I currently have it ranked as 47th out of 50 in our Secret Wars Power Rankings.  Tom would place it last.  As might Ryan if he hadn’t stopped reading it in disgust.  I’ve already looked at issue 1 and after the break I will finish the series with Years of Future Past #2-#5.

END_OF_DOCUMENT_TOKEN_TO_BE_REPLACED

Gabbing Geek Jenny has, in the past, stated her belief in Madam Xanadu as an iconic character.  I tried one before to to suggest that maybe Phantom Lady had a better claim to that title under her criteria (does not have a male version, has not cameoed in a movie or TV show, has an origin story older than the mid-90s, and has been read by Jenny).  Jenny said Phantom Lady’s costume sucked (which, to be fair, it does), but maybe for my weekly “This one died!” column we can try a different character with a better claim than Madam Xanadu.

Let’s talk about Elasti-Girl.  And I do not mean the one in The Incredibles.  Pixar actually asked DC for permission to use the name, and it was granted so long as the name was never used in the marketing.  If you get that action figure from The Incredibles line, her name will be listed as “Mrs. Incredible”.

But let’s talk the original.

END_OF_DOCUMENT_TOKEN_TO_BE_REPLACED

I have a reputation on Gabbing Geek as a guy who doesn’t like comic books.  This knock is generally well deserved.  I don’t like much anymore.  But there is a certain kind of comic that even to this day will cause me to sit in my underwear, fire up the ol’ tablet, click Comixology on my browser, and download a digital file.  What are these amazing tales you ask?

END_OF_DOCUMENT_TOKEN_TO_BE_REPLACED

Wolverine is somewhat renowned as, among other things, a short superhero.  Most adult male Marvel heroes that aren’t Spider-Man easily get to be about six feet tall, minimum, while Wolverine is a measly 5’4″ tall.  To make Wolverine look tall, his onetime sorta Alpha Flight teammate Puck is needed.  Puck absorbed a mystical sorcerous swordsman and managed to have his body condensed to half his regular size, so he generally appears to be, like, 2 feet tall.

Oh, and he was killed in an offhand, offscreen manner early in Brian Michael Bendis’ Avengers run along with most of Alpha Flight to make a bad guy look tougher.