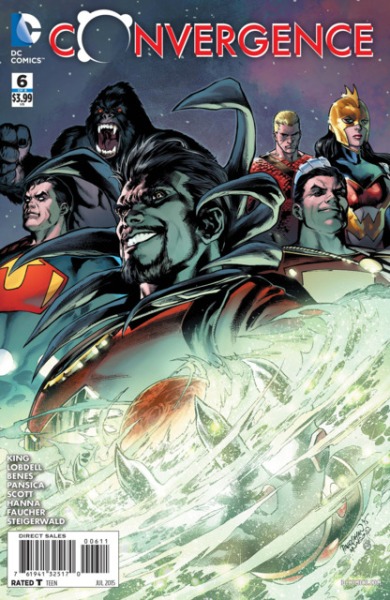 With Deimos becoming the main villain of this event, and Telos and his “Contest of Champions” being pushed to the wayside, Convergence is getting a bit more interesting.  The main mini-series anyway, the tie-ins are still not adding much.

END_OF_DOCUMENT_TOKEN_TO_BE_REPLACED

Welcome to Convergence Week 2.  If you read my coverage of week 1 of Convergence you saw that my Pre-Flashpoint DCU knowledge was nothing impressive.  Thanks to Tom Kelly for filling in some knowledge gaps and for an extensive comment on the Extremists of Angor.

Hopefully this week is a little more in my wheel house as the main combantants are Metroplis from the pre-Zero Hour universe and the world of Kingdom Come.  It’s been awhile but I have read Kingdom Come, and pre-Zero Hour would be right around the time I was actually collecting some DC books with the Death of Superman and Knightfall.  One of the side universes in the spotlight this week is the San Diego of Jim Lee’s Wildstorm universe, from which I read a handful of books back in it’s Image Comics days.  So things are looking up, time will tell.

Be sure to catch up on all the Convergence happenings with coverage of Week One: Part 1, Part 2

Read on for spoilers after break for Convergence #2, Batman Shadow Of The Bat #1, Supergirl Matrix #1, Green Lantern/Parallax #1, and Superboy #1.

END_OF_DOCUMENT_TOKEN_TO_BE_REPLACED

Superhero supporting casts can oftentimes change from creator to creator.  Its not that uncommon.  Yes, some aren’t going anywhere.  Superman will always have Lois Lane, Jimmy Olsen, and Perry White.  Batman will always have Alfred and Commissioner Gordon.  Spider-Man is going to be weighed down by Aunt May and J. Jonah Jameson for all eternity.  But lesser supporting cast members can come and go, sometimes without warning.  When writer William Messner-Loebs was working on The Flash, Wally West had a huge supporting cast of friends that succeeding writer Mark Waid decided were only sporadically useful at best and largely ignored aside from the Pied Piper.  Loebs had Wally and Linda Park say hello to each other at a mutual friend’s wedding on his last page, and aside from her and Piper, Waid built a new supporting cast made up more of various other speedsters.  More egregious would be how Judd Winick gave Kyle Rayner a gay friend, Terry, during his Green Lantern run.  At the end of one issue, Kyle appeared to die and Terry got his power ring…only for returning writer Ron Marz to come in the very next issue to see Kyle alive, well, and with the ring on the very first page, and some dialogue how sometime between issues Terry had simply returned the ring and that was that.  Terry was never seen again.

Then there was the Alpha Centurion.   No one really knows what happened to that guy.

END_OF_DOCUMENT_TOKEN_TO_BE_REPLACED

Crisis on Infinite Earths probably didn’t kill off anywhere near as many characters as its reputation.  But reputations are kinda screwy that way anyway, considering how many people are probably unaware how any “squeal like a pig” scenes make up so little of the movie Deliverance.  But there were really only two deaths in that story that really matter as far as DC was concerned.  Three if you count Prince Ra-Man, and nobody does.  One was Supergirl.  The other was the Silver Age Flash, Barry Allen.  Both of those characters stayed pretty dead for a while, but Barry’s was actually remembered by the general public, or at least by his superhero peers.

The funny thing was, Barry dying may have been the best thing to ever happen to the character.

END_OF_DOCUMENT_TOKEN_TO_BE_REPLACED 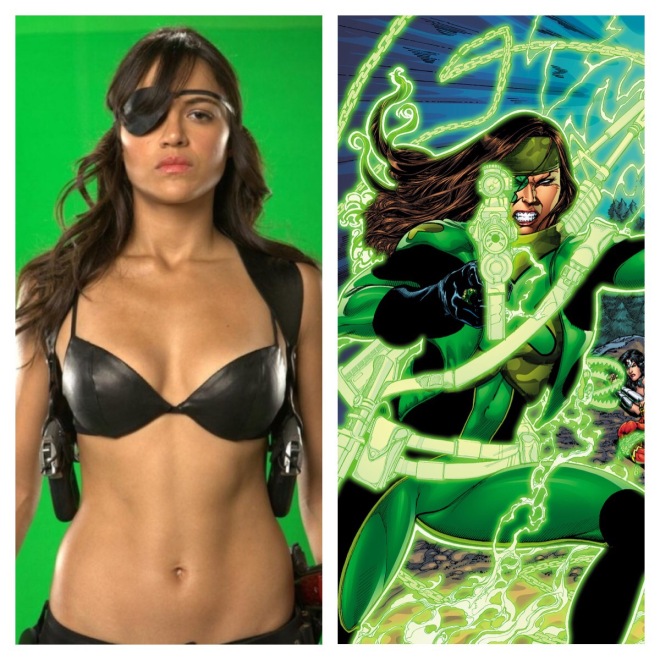 Say hello to Michelle Rodriguez. You know the super star from epic movies like Fast & The Furious,  Resident Evil, and Avatar (and lest we not forget her run on the TV series LOST, quite possibly the best show EVAH!). In a recent article published by MoviePilot.Com, they explore DC’s tilt towards a current rumors that Ms. Rodriguez could play the new Green Lantern. Let’s break this down into smaller chunks.