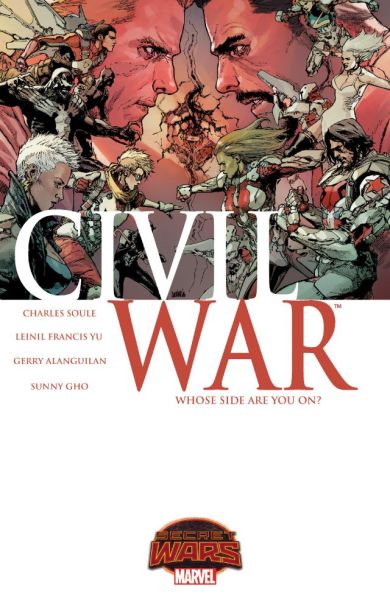 Way back in the middle of July I reviewed Civil War #1.  Six months and 4 issues later I’ll finally look at Civil War #2-5 after the break.  The series was a bit of a mixed bag starting off but unlike many of the Secret Wars series, really finished strong.  It is currently ranked 12th in our nearly completed Secret Wars Power Rankings.

END_OF_DOCUMENT_TOKEN_TO_BE_REPLACED

Writer Paul Jenkins and artist Jae Lee had a surprise hit with an Inhumans mini-series when the “Marvel Knights” line launched, so there was some anticipation for their follow-up.

That would have been a character they said was a long forgotten Marvel hero that predated the Fantastic Four.  They said his name was the Sentry.

END_OF_DOCUMENT_TOKEN_TO_BE_REPLACED

It is not uncommon for a major comics crossover to end in the death of a character.  Marvel’s Secret Invasion was no exception.  A so-so crossover written by Brian Michael Bendis and drawn by Leinil Francis Yu, the big death at the end was Janet VanDyne, the Wasp, on-again, off-again lover and ex-wife of Hank “1,000 Codenames” Pym.

She’s not currently dead.  I’m not sure how she managed to come back, but she’s not dead anymore.  So, really, did it matter?